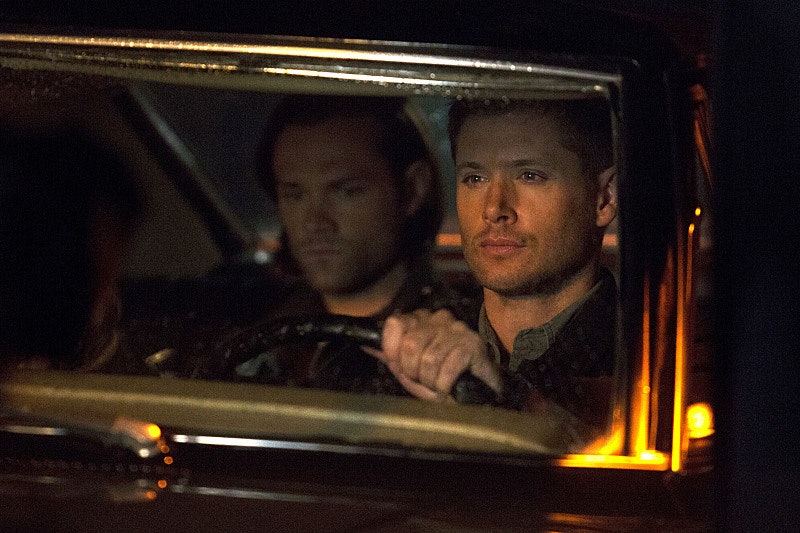 Is it just me or did it seem a tad too easy turning Dean back into a human at the end of Supernatural Season 10's episode "Soul Survivor"? Sure, Dean did psychologically torture his brother while he was still in demon form, saying terrible things about their family and insulting Sam at every turn. He even escaped his chains and tried to kill the younger Winchester. But nonetheless, the cure from demonhood took a lot less time than I expected and now we're just supposed to believe he's back to his burger-eating, beer-guzzling, has the weight of the world on his shoulders, human self? Something smells fishy, and it's not a fish taco. Despite being human again, Dean still has that pesky little Mark of Cain, and I think it may hinder him from ever truly returning to his pre-mark self.

Even after Sam, with the help of Castiel, administered the final dose of blood that took away Dean's demonhood, Castiel told Sam not to be completely overjoyed and assume his brother was completely healed. Castiel purposefully reminded Sam of the Mark of Cain. That has to mean that despite his lack of demon-ness, there is still a level of bloodlust inside Dean that may not be easy to tame.

Sure, we can all say that as long as he doesn't have the First Blade in his hand, Dean can't go out of control, but that's not totally true either, is it? We all know that despite all the good he tries to do every single day of his life, human Dean will always have a little darkness inside of him from his time in Hell, the survival skills and renewed love of hunting he regained while fighting for his life in Purgatory, and probably from his time as a demon. Because he wasn't possessed by someone else, Dean likely remembers the terrible things he did to his brother and everyone else he encountered while he was a demon.

Side note: Do you think he remembers singing "I'm Too Sexy" at karaoke? I hope they address that.

In Tuesday night's episode "Paper Moon," Kate the Werewolf from Season 8 will return and may be suspected of murdering a bunch of people. Will Dean's newly regained humanity and his memory of killing and harming people as a demon help stop himself or Sam from automatically accusing and trying to kill Kate? Let's hope so, because I also don't believe she could just turn into the monster she saw her boyfriend and his friend become in "Bitten." Maybe Dean will understand her struggle and empathize. Then again, if he's not back to his human self completely thanks to that Mark of Cain, maybe the bloodlust will take over again for good.