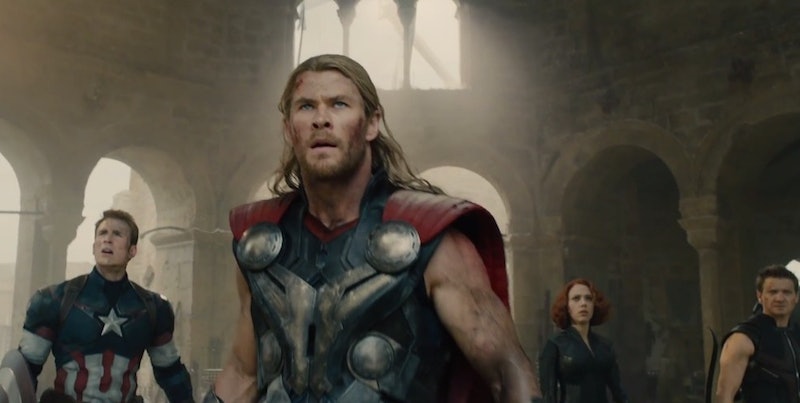 Hold up. Wait a minute. What? I'm already trying not to get my hopes up about this, but I can't help it. Let's be honest with ourselves for a moment. Marvel is falling behind in the superhero movie game already and they don't even have a new movie out yet. Sure, the official trailer for Age of Ultron was the greatest thing the world had ever seen, but DC has movies coming out that give the leading role to people of color, LGBT actors, and women. What has Marvel done for me lately? However, apparently Age of Ultron will be an even bigger game changer than we imagined. According to Marvel studio head Kevin Feige, the Avengers roster will change after this film. Whaaaat?

"The Avengers films, ideally, in the grand plan are always big, giant linchpins. It’s like as it was in publishing, when each of the characters would go on their own adventures and then occasionally team up for a big, 12-issue mega-event," said Feige in a statement to Buzzfeed. "Then they would go back into their own comics, and be changed from whatever that event was. I envision the same thing occurring after this movie, because the [Avengers] roster is altered by the finale of this film.”

Yes, yes, I know that it's too early to start believing that they're going to find a replacement Avenger for the third film just because one — or more — of them exit after Ultron. I know that. I do. But what if, you guys? And which Avenger will be taking off? The best guess at this point would probably be Iron Man. Him quitting the Avengers would tie in with the comics and set up perfectly for Captain America 3 and his inevitable conflict with the Cap in the Civil War storyline. However, what if Captain America quits the Avengers just like he quit S.H.I.E.L.D? Or what if Thor decides to return to Asgard and never return to meddle in the affairs of mortals again? And then there's Hawkeye, whose actor Jeremy Renner has an illustrious career going on and who doesn't have a solo movie deal on the table that would keep him here.

What I hope Marvel realizes is that they have so many diverse options in their rich comic book mythos to replace any or all of the Avengers who might decide to exit.

If the Hulk Leaves, there's She-Hulk.

Jennifer Walters, better known as She-Hulk, is Bruce Banner's cousin and a lawyer. Due to a series of contrived events, Bruce gives her a blood transfusion that turns her into She-Hulk. Maybe Age of Ultron will result in that kind of emergency situation and Bruce retreats from the team out of guilt, leaving She-Hulk to take his place.

Kate Bishop was already running with the Young Avengers by the time she picked up Hawkeye's old gear and donned it to become the next Hawkeye (with Captain America's help, no less!) I repeat, Kate Bishop was already a certifiable badass before the events of Age of Ultron. Adding her to the film would be a no brainer.

Marvel announced in 2014 that Sam Wilson, better known as the Falcon, would be taking up the shield as the next Captain America. If Steve Rogers takes off after Age of Ultron, never to be seen again until Captain America 3, then Sam would be more than happy to pick up his Avengers duties for him.

Yes, that's right, there was a time when Pepper Potts donned an Iron Man suit of her own and went out to fight crime. We saw a little of that in Iron Man 3, but nowhere near enough if you ask me. If there's going to be an Iron Man 4, it should star Gwyneth Paltrow instead of Robert Downey Jr.

Marvel also announced in 2014 that a woman would become the next Thor in the comics. I've already begged them to put female Thor in the films, and here's their chance to listen to me.

Don't be ridiculous. This would be a step backward, okay?