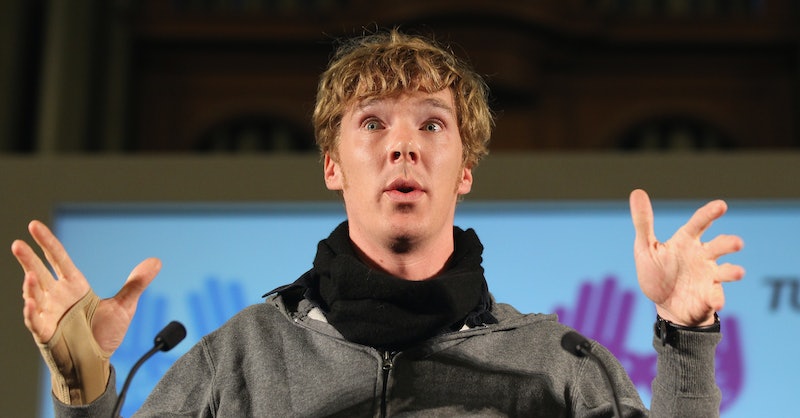 Few will find it terribly shocking that Marvel has just about cemented Benedict Cumberbatch in the title role for its developing Doctor Strange movie. Right about now, in fact, a few thousand “called it!”s and “told ya so!”s are being fired like heat-seeking missiles to and from the various Cumberbatch-affixed corners of the Internet. It’s the sort of casting that seems just shy of perfect thanks to the ubiquity that has enveloped its precedent rumors since the dawn of the actor’s career explosion a few years back. But that’s just the thing: it’s the sort of casting that should have happened those few years back. And not today.

For quite some time, Cumberbatch bubbled just beneath sea level, a favorite only to those who caught the first season of Sherlock in its original run, or who were able to peel eyes way from Keira Knightley and James McAvoy in Atonement and take note of their effective supporting team (anyone capable of this feat deserves his or her own superhero franchise). He was the sort of acting force that commanded a small but devoted fan base — one with its own questionably degrading nickname, to boot. The sort primed for glory with superlative brands like “the next big thing,” or “this generation’s John Gielgud.” And, perhaps most importantly, the sort who’d warrant his own Marvel movie.

Disney and Marvel Studios have been kind to the up-and-coming. Before Thor, Chris Hemsworth was a tertiary player in J.J. Abrams’ Star Trek, and the sort of actor who couldn’t even get Cabin in the Woods released. Before Captain America: The Winter Soldier, Chris Evans was the good-looking third-billed from Fantastic Four, a movie that seemed to have killed his career before it ever began.

When Robert Downey Jr. had signed on for Iron Man, he had yet to shake free from the tabloid connotations that dragged his career down from mid-‘90s idolatry. And prior to Guardians of the Galaxy, central star Chris Pratt was known and loved by all fans of Parks and Recreation, but in large part by this community alone. (Fine, I’ll give him Everwood, too.)

In fact, the last headliner that Marvel wrangled at his peak was Edward Norton, whose The Incredible Hulk stands as the Cinematic Universe’s most prominent failure, and whose character was usurped by Mark Ruffalo: another on-the-fringe figure upon his initial institution into the Avengers gang.

As such, Cumberbatch’s slaps fans with a big question: is Marvel not interested in building a franchise out of Doctor Strange?

Casting such a consistently busy actor seems to insinuate that Marvel isn’t concerned with Cumberbatch’s availability past the release of their slated Stephen Strange flick. Cumberbatch is seated rigidly in the communities of Oscar bait, family animation, and Middle-earth — not to mention his ongoing attachment to Sherlock — and doesn’t seem to be giving up any of these chairs in the foreseeable future. (Don’t tell me you believe that they’re done with Tolkien adaptations after The Battle of Five Armies.) With so much perpetually on his plate, Cumberbatch would not be an easy actor around whom to build a Marvel franchise. Curious, as franchise-building is essentially synonymous with filmmaking in the Marvel playbook.

On top of this, Cumberbatch’s casting lacks the daring vibe associated with Pratt’s for Guardians, Ruffalo’s for Avengers, or Downey Jr.’s for the first Iron Man. We’ve seen him do blockbuster work, we’ve seen him display dramatic gravitas, and we’ve seen him handle himself adeptly in the line of comedy. So what’s left to discover?

Additionally, Marvel had its best opportunity with Doctor Strange to veer from its monochromatic tendencies. The little known character, steeped less in the traditional superhero tropes than in magic and fantasy, might have been Marvel’s best shot yet at casting a lead outside the white male demographic.

While the studio —so afraid of diversity that it has yet to commit to a standalone movie for its beloved Black Widow (Scarlett Johansson) and has danced around the prospect of a Black Panther film for ages — might never have copped to the idea of giving us a Captain America, Hulk, Thor, or Iron Man that didn’t fit the recipe for your basic Kennedy, there was at least feasible hope for ingenuity with Doctor Strange. Fans and writers have devised campaigns for the likes of Heroes star Sendhil Ramamhurthy and general godsend Tilda Swinton — both interesting choices worthy at the very least of consideration.

As we gear up for a Cumberbatch-led Doctor Strange, we can essentially picture the product already. We know that he’ll handle the material with grace and charisma, that he’ll sell tickets and satisfy viewers. We’ve known this for years. The only question that sprouts from this determinedly unsurprising revelation: will he have time for the sequel?