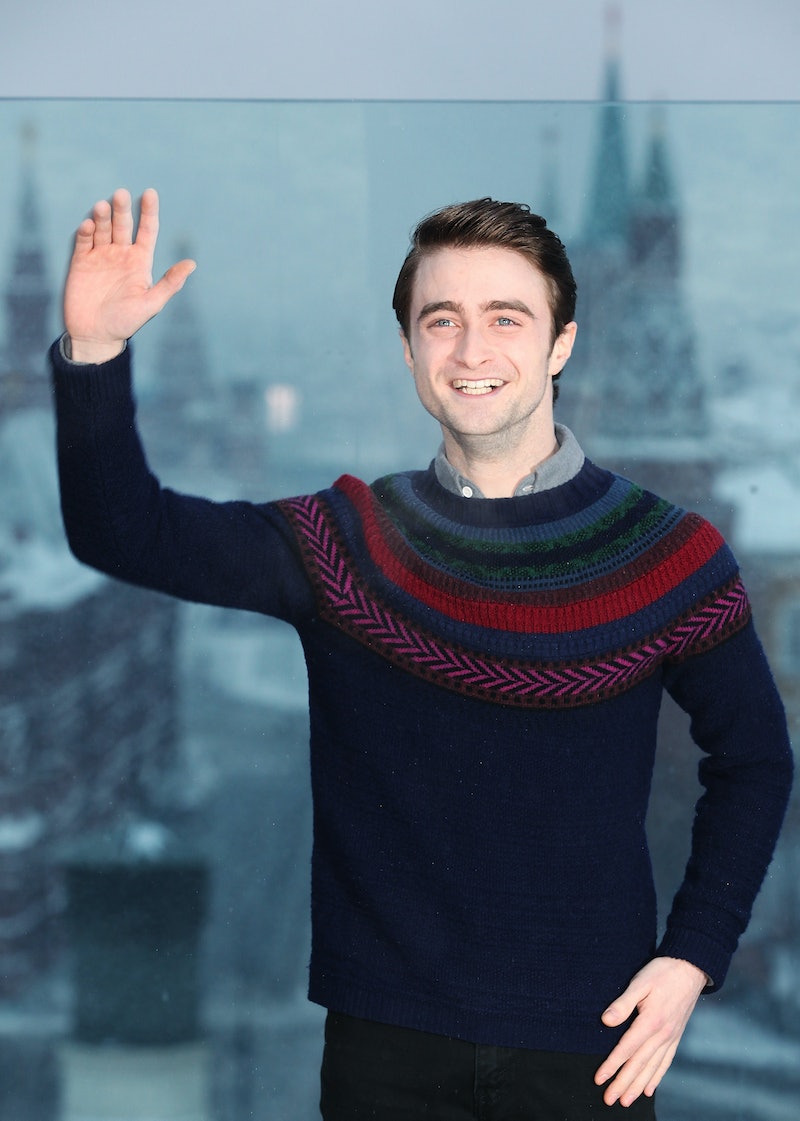 There are already a thousand and one reasons to love him, but just in case you needed a few more, you should peruse through Daniel Radcliffe's Reddit AMA from yesterday. Fans were on the site asking him anything and everything, feeding both our still insatiable Harry Potter curiosities as well as giving us some insight on the man behind the scar. In true Radcliffe form, he was very candid and forthright in his answers, and very respectful of people he has worked with in the past. And if you read the way he answers, you can basically hear the way he would say it in his actual voice, which just ups the authenticity of this AMA even more.

This is, of course, far from first time Daniel Radcliffe has won the approval of the internet. This past July he made headlines sneaking into Comic-Con in a Spider-Man costume, and a few days ago his feminist comment about the sexualization of actors made me all too proud to be on the Radcliffe bandwagon that has been steadily collecting members for over a decade (side note: are we that old now?) I saw the top of his head once in New York and I am still a changed woman. If you missed the AMA when it was going live yesterday, we've collected six gems that will give you some crucial Daniel Radcliffe knowledge that you'll probably need just in case you ever get any closer to him that I did:

1. You Finally Know What To Call Him When You're Besties

Question: Do you prefer Dan, Daniel, Danny... what?

Answer: Just "Dan" is best. "Daniel" is fine, but I always sort of think I'm in trouble. And "Danny," I think, if you call yourself "Danny" you give everyone around you the right to sing "Danny Boy" to you ALL THE TIME, and it's a nice song, but once you've heard it 1,000 times, you don't want to hear it every time you introduce yourself to somebody.

2. It Turns Out Snape Is Every Bit As Nefarious In Real Life

Question: What was the best prank you pulled on the HP set?

Answer: God... I should probably about the one that was pulled on ME, rather than any I pulled. Because it came from a very unexpected place.

There's - in the 3rd film - there's a shot in the great hall of all the kids sleeping in the great hall, and the camera starts very very wide, and comes in so that it's an inch from my face, a very long developing set, yeah, and Alan Rickman decided he would plant one of those fart machines in my, uh, sleeping bag, and they waited until like -the camera had come in for this huge DRAMATIC developing shot, and then unleashed this tremendous noise in the great hall.

I immediately thought: "This is one of the other kids fucking around, and we were going to get in trouble."

But as it turns out, it was one of the members of Britain's acting royalty.

I think I laughed a lot, was probably a bit embarrassed, but it was really really funny.

Some heroic redditor was kind enough to provide us a YouTube link chronicling the event:

3. You'll Know How To Find Him This Friday Night

Question: Hey Daniel! What are you going to be for Halloween?

I'm leaning towards Boba Fett, but I haven't found a good enough costume yet.

4. The People Vouching For A Marauders Era Film Might Have Daniel On Their Side

Question: Not including Harry Potter, who is your favorite character in the Harry Potter franchise?

Answer: Probably Sirius. Like I always loved the character, and then Gary's portrayal of him I thought was perfect. Or Lupin, really. Any of the characters my dad used to hang out with, other than Wormtail. There was always something bout those two guys I loved a lot.

5. The "Snood" Is Just One More Thing Daniel Can Pull Off

Question: Hi Dan!! Where is the most obscure place you have ever gotten recognized?

Answer: Oh! I mean...anywhere you'd care to name. I've been recognized in Antigua, I got recognized a lot there.

There isn't anywhere in the world Potter hasn't reached.

I was on a roller coaster, I think it was in Paris, actually, and it was in the middle of winter, and I was wearing basically like a thing in England, don't know if you have them here, we called them "Snoods" - they're like a warm thing that covers you whole head, basically only shows your eyes, and I was like 12 years old, I was wearing one on a roller coaster, and I guess my eyes do give me away because the people BEHIND us somehow recognized me and asked an autograph when we got off the coaster !And we were like "How did you SEE me?!" it was impressive.

Question: Harry Potter is obviously a Gryffindor, but what is Daniel Radcliffe?

Answer: I mean, I...to me, it's not a...to me I absolutely think I would be in Gryffindor! But there's never any doubt of that for me. Yeah. I like, maybe I'm just biased because I played one for so long, but I could never picture myself in any other colours.