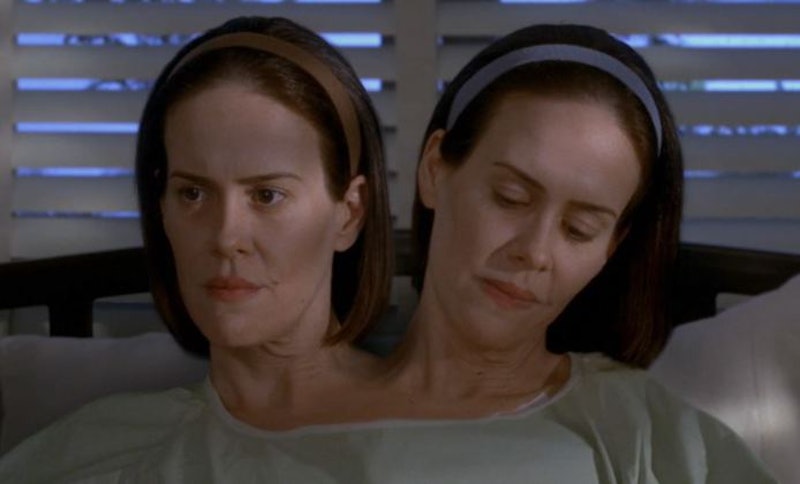 The fourth season of FX's American Horror Story is filled with a wide assortment of uniquely amazing characters — it is subtitled Freak Show after all — but far and away the most captivating (and impressive) performance inside Elsa's Cabinet Of Curiosities belongs to Sarah Paulson, playing conjoined twins Bette and Dot Tattler... even if the show isn't always entirely sure how conjoined twins are supposed to work.

But while we're enjoying watching Bette and Dot struggle with being joined at the hip, the sisters are longing for a bit more personal space. And can you blame them? Cynical and talented Dot is willing to go under the knife, even possibly sacrificing her own sister, for a chance at a normal life. Naive and insecure Bette is considering offing her own twin, ever since Elsa suggested that Dot is trying to hog the spotlight. We've seen the Tattlers on an operating room table — only inside a nightmare, true — but since Freak Show seems determined to tease us with the idea of Bette and Dot being separated, I have to ask: What would happen if they were?

Putting aside the matter of whether or not this would even be possible (because, let's face it, reality and AHS don't mix very well), the writers may move in this direction simply because it's so difficult to pull off the feat of turning Paulson into conjoined twins. But the idea of separating the Tattlers raises a lot of questions. On a very surface level, there's the fact that the Tattlers are not merely fused at a singular point — they are literally two heads sharing one body. There would be no way to separate them and create two whole persons.

So what would un-conjoined Bette and Dot look like, if they both survived the surgery? Either they would both only have half a body (through further CGI trickery), or one would have a whole body and one would just be a talking head. Neither of these options are anywhere near feasible (again, realism) — but it wouldn't be the first time in AHS history that a character was reduced to a decapitated noggin.

But imagine for a moment that Bette and Dot were somehow successfully cut exactly down the middle. The (literal) half-sisters could remain popular freak show performers while never having to share the spotlight: a win-win for everyone! But since that's just about the happiest ending possible for the Tattlers, it's probably not going to happen.

Another possibility is that we're led to believe that one of them died during the operation and there's only one Tattler left. After a series of bizarre occurrences, it's revealed that the other Tattler did in fact survive, and has been wreaking havoc while disguised as her sister.

Or perhaps the opposite could be true. Perhaps we'll be led to believe that both Bette and Dot survived the surgery, but the season-ending twist will be that one of them did, in fact, die — and the other was so traumatized by the loss of her twin that her psyche broke and she adopted a split personality. That certainly sounds like the kind of crazy idea showrunner Ryan Murphy might dream up for his most bizarre show.

Whatever Murphy has in store for the Tattlers, it's bound to be twisted... and impossible to predict. We'll likely be teased with the possibility of Bette and Dot being separated for a while — but whether or not that actually ends up happening is anyone's guess. Only one thing is certain in my mind: the more Sarah Paulson, the better.