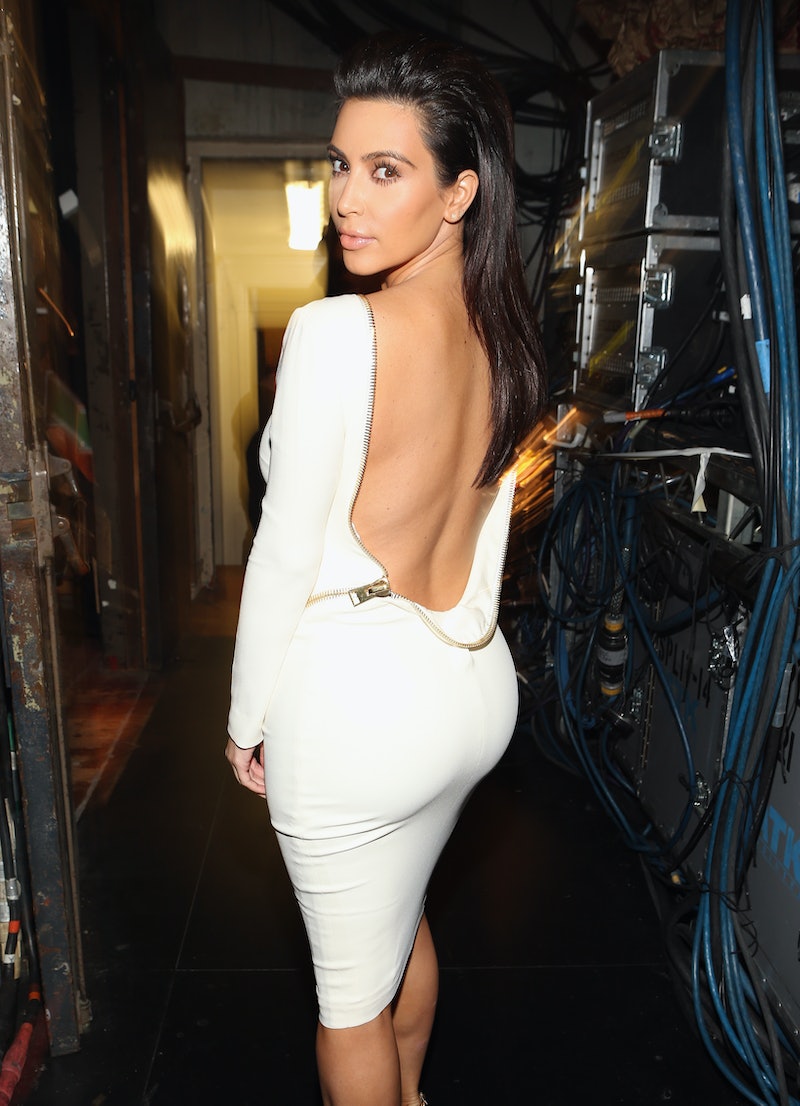 Sometimes I think I know Kim Kardashian — I mean, I devote much of my free time to playing her iPhone game — and then other times, I realize that this woman is just such an enigma. Apparently, Kim Kardashian is hoarding Blackberrys. Yes, you read that correctly — one of the most influential women in the world, who also happens to own and operate an iPhone, is worried that Blackberrys "will go extinct." Kardashian was a guest speaker at the Code Mobile conference on Tuesday and it was during said conference that the reality star revealed that she scours eBay for Blackberrys and always keeps three spare devices "in her room" at all times. I knew Kim had a shopping problem from that one episode of Keeping Up With The Kardashians, but I had no idea she was a paranoid hoarder.

I can understand that she never wants to be separated from the device that helps run her brand — one time my iPhone broke and I almost lost it when the Verizon store told me I couldn't get a replacement right away and my existence doesn't rely nearly as much on my phone as Kim's. But still, THREE Blackberrys? And that's not all — Mrs. Kardashian-West revealed that the 'berrys are "lined up" in her room, ready to be called to battle and Kim told the audience, "if one breaks and I'm down to two, I search on eBay for that third."

This is the stuff an episode of Hoarders or True Life is made of — I can see all of the crossover opportunities now (if you secure any, Kris Jenner, I expect 30 percent of the royalties). But the real question here is, if Kim's hoarding Blackberrys, what other stuff could she possibly be hoarding?

You know the joke that for every single selfie you see on social media, there are at least 40 attempts at the photo on the subject's phone, right? Well, can't you see Kim totally being one of those people that doesn't even bother to delete the excess selfies? Actually, it's not even that she can't be bothered to go through the trouble, she just can't get rid of them. What if she needs to make another selfie book? This photo is so bad but she can't just delete, that'd be insane. Kim definitely has thousands of selfie outtakes that she's hoarding on her iPhones, just saying.

This might not be as creepy as it sounds — I mean, isn't that something all moms do? Save a lock of hair from their child's first haircut? I might be making this up. But, Kim, who's extremely regimented in her grooming, probably has had North get multiple haircuts during her one year of life. And, I mean, I wouldn't be surprised if she was saving all of it.

You know Kim's secretly playing Kim Kardashian: Hollywood as Willow Pape. She's the mastermind of this entire fame circus, which also means that she's hoarding all of the available K-Stars in the game — aka the reason why you couldn't afford the exact replica of her wedding gown for your avatar's wedding.

Honestly, I think Kim is totally beautiful and she should always treat herself to carbs or whatever she wants to eat at any given time. She works so hard, she deserves it. But, when I think of all the times Kim's publicly shamed carbs on social media, it's blatantly obvious that she's a secret carb-lover and then I imagine her sneakily eating pasta while she applies a face mask in her bathroom.

She might need them for something later — to reinvent her crying face or in the case that someone discovers that your tears are really the secret to eternal youth. I mean, Kim did get a blood facial once in the name of perfect skin. She might be equally as worried that her tears will go extinct as she is that Blackberrys will.