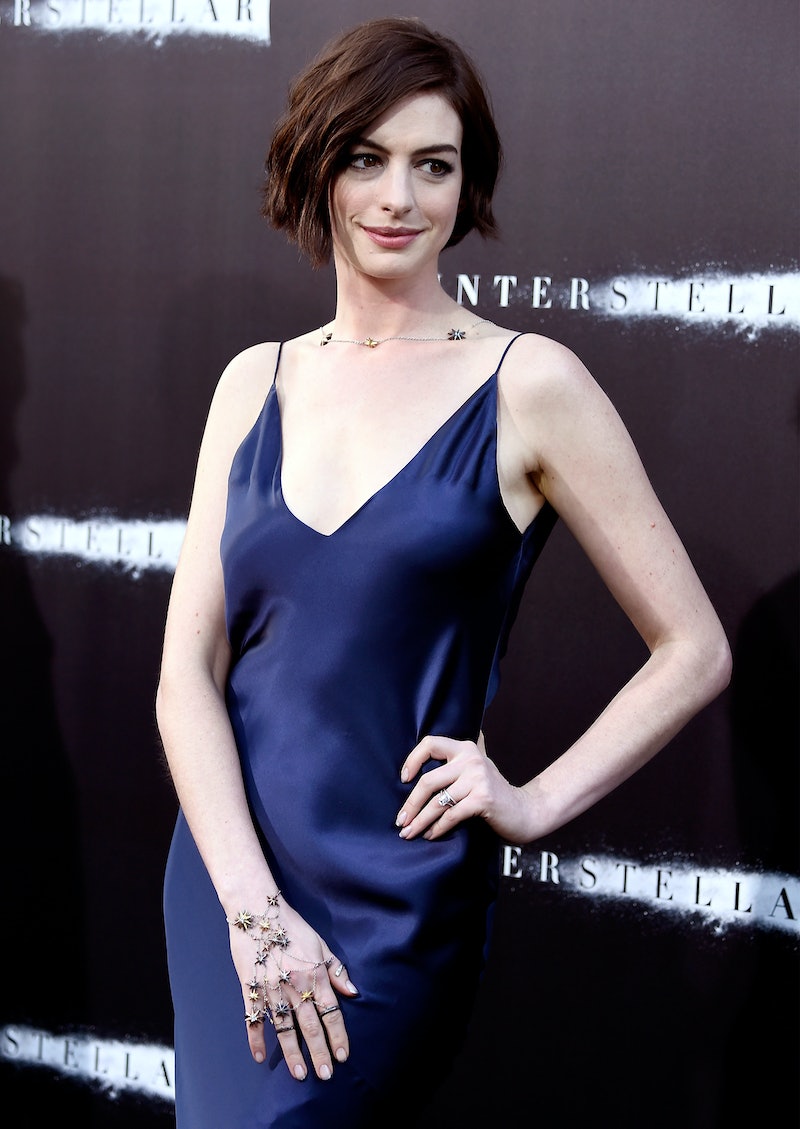 It may only be 2014 (though almost 2015, egads!), but we're always talking about '90s redux. I mean, it doesn't even seem that long ago... yet here it is cycling back into our fashion consciousness time and time again. Specifically, I'm talking about slip dresses. That said, I'm totally cool with the return of the '90s — I was just watching Clueless, and there's no denying that Cher Horowitz has got major style, and if that's how we're going to start dressing, sign me up (and get me a feathered Alaia jacket, stat).

Anyway, there's been a lot of talk about grunge and plaid making a second round (Demi Lovato's got the whole thing down to a science), but now we're graduating to slip dresses — which are arguably pretty grunge as well, especially when paired with some stompy Doc Martens.

Yep, the slip dress has been everywhere lately — everyone from Rihanna to Jennifer Lawrence has taken one out for a spin — but now they've officially arrived. When Anne Hathaway makes her big return to the red carpet at a hugely star-studded Christopher Nolan movie premiere — that's when you know a style trend is here to stay (albeit for a second time).

So with that in mind, read on for some of the best recent deployments of the slip dress — and where to score an adorable one for yourself.

I'm kind of obsessed with her whole look here — that shade of blue is perfect on her, her sooty eye makeup is gorgeous, and did you see her hand jewelry?

She wore the bodycon look with major aplomb at the recent amfAR Inspiration Gala in LA.

Lea may have just slightly one-upped January in the bombshell department at the same event.

Ri-Ri here rocks the slip dress a lot, and this Adam Selman number was especially great.

Remember when J-Law kind of made waves when she wore a Jason Wu gown very reminiscent of her character Mystique's scaled blue skin? It was also notable for the fact that it was a (very) welcome departure from her usual Dior.

The slip dress, here seen living up to its full, glittery potential.

Like Rihanna, Karen Elson rocks the slip dress a lot — I also loved the Jason Wu (boy, he sure loves his slip dresses, doesn't he?) that she wore to the Girls season 3 premiere.

So where to get the style for yourself? Luckily, they're becoming pretty ubiquitous, so they're pretty easy to find. Here are a few of my favorites:

So you can go sparkly a la Lea Michele.

If you're going for a more boho, Zoe Kravitz vibe, this flowy number might be for you.

On the other hand, if you're up for serving some grown-up Cher Horowitz realness, this is your girl.

More like this
Rita Ora’s Sheer Dress & Mermaid-Inspired Prosthetics Stun At British Fashion Awards
By Sophie McEvoy
Florence Pugh Brought The Boudoir To The Red Carpet In A Sheer Cape Dress
By El Hunt
Behold: The Wildest Fashion Moments of 2022
By Dominique Norman
Twitter Can’t Get Enough Of Lewis Capaldi Creating Fashion Looks For ASOS
By El Hunt
Get Even More From Bustle — Sign Up For The Newsletter