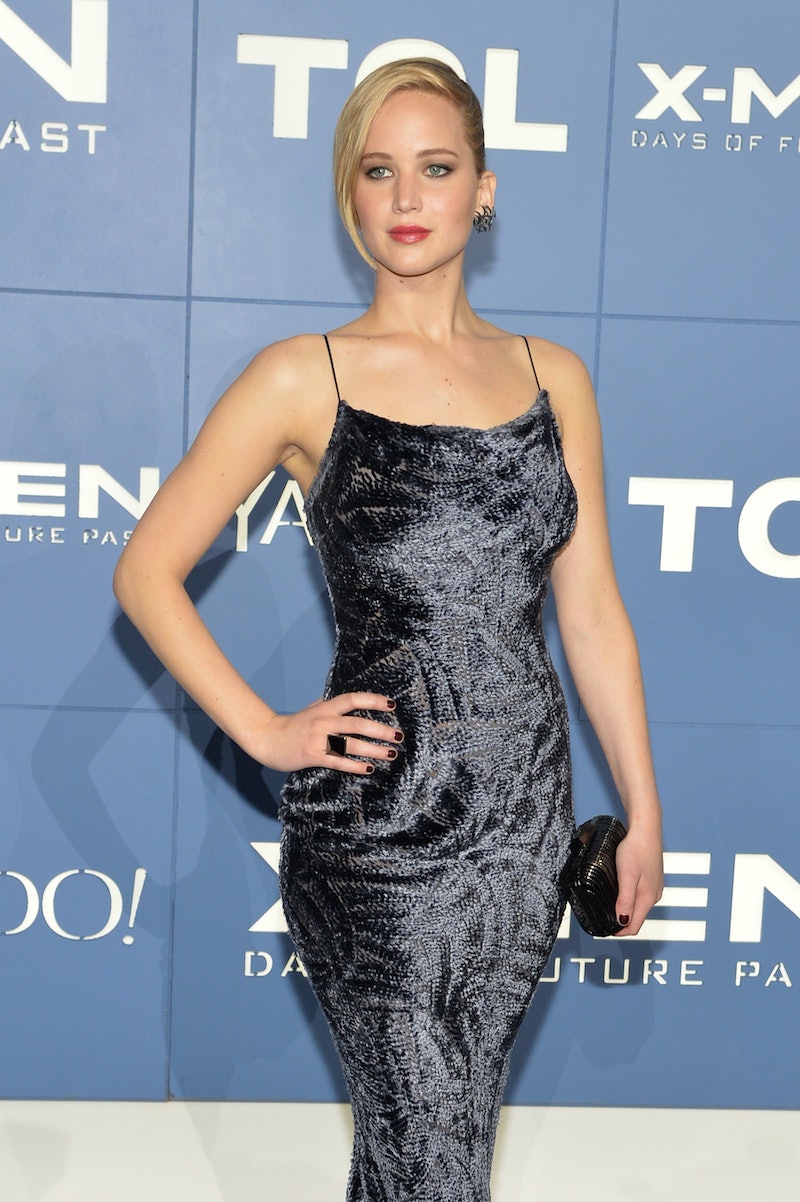 I don’t care if she’s a walking, talking GIF whose endlessly chattering interviews and endearing awards-show trips and falls are the result of a hyperactive personality and a few too many drinks (which she basically admitted to in the her latest Marie Claire interview): To me, Jennifer Lawrence is, and always will be, perfection. Not only is she hilarious and insanely talented (hello, the 23-year-old already has an Oscar), but she’s also absolutely gorgeous and has a super-sexy sense of style both on the red carpet and off — a truth that’s only been cemented over the last several years as Lawrence has been the (well-paid) face of Christian Dior, appearing in the brands’ ads and making practically every red-carpet appearance in a couture gown designed by the legendary Parisian label.

But after staying off of the red carpet since the 2014 Academy Awards in March, the Hunger Games actress finally made her return on Saturday at the X-Men: Days of Future Past premiere in New York City. And as if the excitement of spotting Lawrence on the red carpet for the first time in months wasn’t enough, something even more exciting went down at film’s first premiere of the press tour: The actress didn’t wear Dior.

Styling the look with simple strappy sandals, statement earrings, a subtly smoky eye, and beautiful berry lip, Lawrence looked nothing less than sophisticated in her non-Dior ensemble. She also showed off her slowly-growing-out hair, which she styled with a dramatic, sleek, and side-swept bob.

While Lawrence was undoubtedly the main attraction of the evening’s red carpet, she wasn’t the only star who dressed to impress. Actress Emma Roberts — who’s starring alongside James Franco in a new flick, Palo Alto — hit the event in a perfect pink satin sheath dress from designer Katie Ermilio. With its strapless, bustier top and midi-length pencil skirt, the ensemble was a classic pick in a shade made for a spring event.

Girls star Zosia Mamet also took to the red carpet, looking far sunnier than usual in her crisp white crop top and baby pink, pleated maxi skirt, paired with a casual bob and cuff bracelets. While Roberts and Mamet certainly looked pretty in their pastels, I think we can all agree that Lawrence’s crushed velvet, non-Dior gown was the only thing that really mattered at the X-Men premiere — and was a label change we could certainly get used to in the future.

More like this
Jennifer Lopez Wore A Naked Dress To The Shotgun Wedding Premiere
By Dominique Norman
Phoebe Dynevor Serves ‘Bridgerton’ Underboob In Stunning Floral Gown
By El Hunt
5 Wild Theories About Miley Cyrus’ “Flowers” Music Video
By Jake Viswanath
J.Lo's Micro-French Manicure Has A Fun, Sparkly Twist
By Olivia Rose Rushing
Get Even More From Bustle — Sign Up For The Newsletter
From hair trends to relationship advice, our daily newsletter has everything you need to sound like a person who’s on TikTok, even if you aren’t.