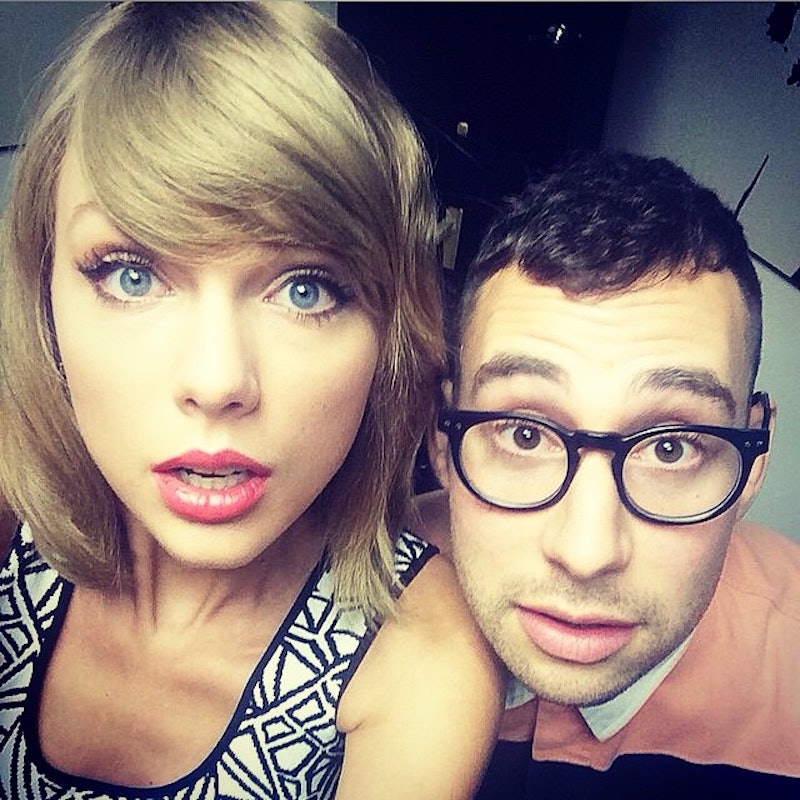 Maybe it's because I've been listening to it non-stop for the past 24 hours, but it seems like everywhere I look, people are talking about (and praising) Taylor Swift's new album, 1 989 . It's inescapable. And it's not just hardcore fans, either — it's people who you would never, ever expect to have Swift on their radars. Like, I don't know, comedian Patton Oswalt, for example. Yes, on Monday, FREAKIN' PATTON OSWALT EXPRESSED HIS LOVE FOR "SHAKE IT OFF" ON TWITTER. This was the first sign that T. Swift pandemonium had officially begun to set in. Apparently, no one is immune to 1989's charms — not even Oscar winner Reese Witherspoon. Or one of the lead singers of rock band Blink 182! Or Shaun of the Dead actor Simon Pegg!! OK, this is starting to get freaky.

The second sign: Insane first-week sales predictions. Recently, Billboard reported that 1989 was projected to sell around 750,000 copies in its first week. That's a great number, especially when you consider the sad state of album sales in this country, but fans were hoping that Swift would be able to once again debut with over a million copies sold — just like she did with her last two albums, Speak Now and Red. Well, as it turns out, they might get their wish.

Yes, I was skeptical, but now, music industry website Hits Daily Double is predicting that 1989 will sell over a million copies in its opening week, making Swift the first and only artist to have ever achieved this impressive feat three times (three times in a row, I might add). Wow. This is serious.

The third sign: Retailer panic. So, in order for Swift's sales predications to have gotten such a massive bump, people must be out buying 1989 in droves, right? Yes — and the proof is all over Twitter. Apparently, some stores can't even keep 1989 on the shelves! (I almost always buy albums on iTunes because physical CDs just seem archaic and useless to me, but even I drove to Target on Monday to buy my copy. You know I needed those exclusive bonus tracks!)

The fourth sign: Critical acclaim. So far, most critics have reacted favorably to 1989 — which is pretty rare for a pop album. Respected publications like The New York Times, Rolling Stone, Billboard, The Guardian, and Entertainment Weekly have all given Swift's fifth LP a positive review. Whoa. See? I told you: No one is immune to this madness.

So, will more surprising celebrities come out in support of 1989 in the coming days? Will Swift actually sell over a million copies in her first week, yet again? Will she continue to beguile the critics? Stay tuned. Something tells me this T. Swift pandemonium is just getting started.