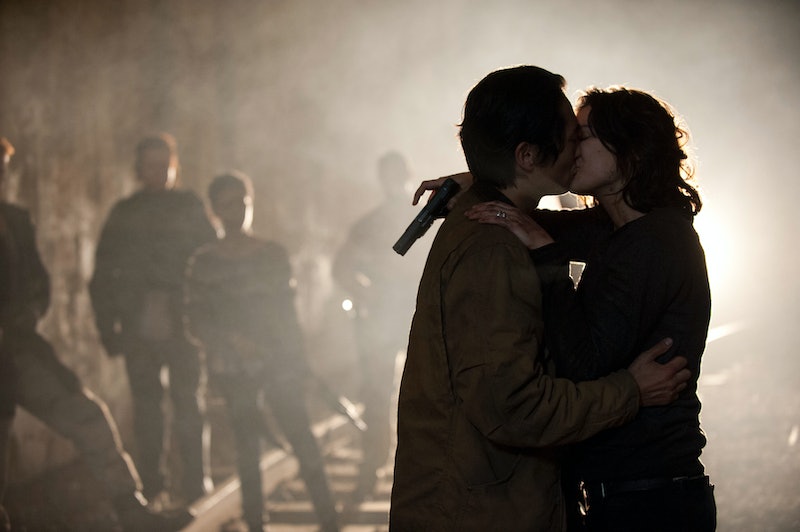 These TWD characters have been through a lot, but at least they have each other. For now. We're all still scared that Glenn is not long for the living. He's so far survived a teasing near miss at Terminus. He and Maggie headed off to Washington together, but what looks like a happy ending is almost certainly a death wish on shows like this. If you don't want to think about the possibility of Glenn dying on The Walking Dead and you and your significant other would like to celebrate his life while you still have the chance, a Glenn & Maggie Halloween couples costume is the way to go.

Remember the good times. Go on supply runs and burn each other's photographs because you vow never to leave each other's sight again. Dramatic much? You don't even need weapons to be recognized as these lovable characters. In fact, I would suggest you don't go out on Friday night with fake guns. As badass as it may make you look, you don't want to cause real world trouble, and some parties might make you toss or surrender your weapons. Bonus points if you pull wedding rings off of Walkers!

Also, if you two are super lazy, this is a really easy costume because the characters on The Walking Dead mostly just wear dirty clothes. You don't need to shower, just let your greasy hair hang low. You probably won't have to go farther than your hamper to dress up.

Glenn has been dressing a little more grown-up lately. He prefers khaki pants, which is simple enough. Depending on your plans for the night, you may want to grab your old backpack (or current backpack, I don't know your life). Just stay away from dudes with baseball bats, get these other items, and you're Glenn!

American Apparel is always great for a last minute costume. They have a wide range of baseball shirts or henleys to choose from.

Here's the thing about television Halloween costumes. Even if it's not what the character looks like now, sometimes you have to go with iconic elements. For Glenn, that means you at least have to have the baseball cap, like this basic one from Lids.

This goes for both of you. Cheap stage makeup is an easy way to make dirty smudges on your face and shoulders. A bronzer might work in a pinch but you might miss it come summer! You can add some fake blood too from a Halloween supply store if you are feeling really ambitious. Just make sure it's not infected!

She's wearing a long-sleeved red shirt now, but for Maggie, I think I would go with her Season 4 look. Like the baseball cap, it's a little more recognizable. Personally, I suggest you carry a picture of Beth around to show to people and ask whether or not they've seen her. Maggie and Glenn may have ridden off with Abe's crew to Washington DC but you still care about her sister, right? Here's what else you'll need.

You can also grab a shirt for Maggie at American Apparel while you're shopping for Glenn.

The more buckles, the better. Here's a good Modcloth example. Pair the two brown items with dark, or black jeans, and you're set.

As a final, post-apocalyptic touch, you have to give Maggie her holster. If you already have a thick brown belt with a "Western" look, that will do just fine. If you do need to acquire one, I'm going to get creative, and suggest you save money by purchasing an Indiana Jones costume accessory kit. You can get that at most stores, even Walmart! Just don't tell reveal your secret around people you don't trust, or they might start calling your Glenn "Short Round" and that's not nice. Not nice at all.