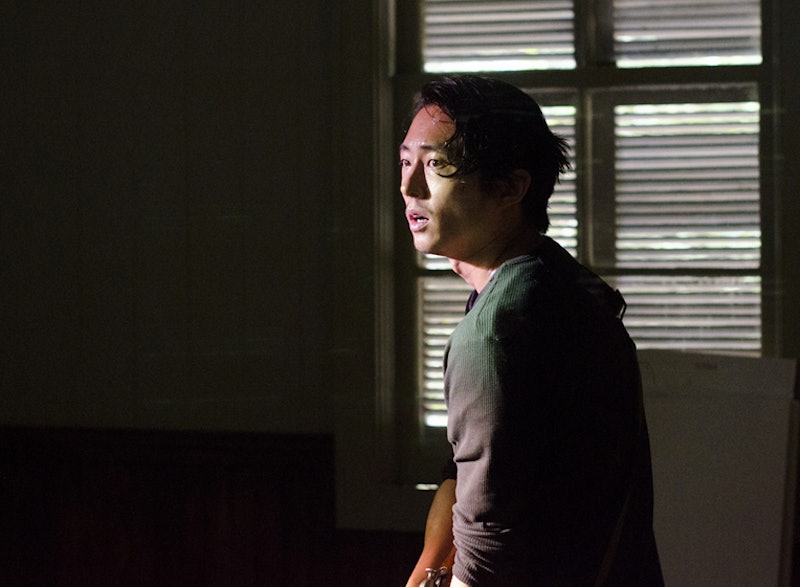 One of the main things that keeps The Walking Dead from being an hour of monotonous zombie gore week after week is the heartfelt, emotional writing, and the performances by its actors. Exploding herds of the undead are fun and all, but it's relationships like the one between Glenn Rhee (Steven Yeun) and Maggie Greene (Lauren Cohan) that make the show so great. We got to see the tender start of their romance (quickie in a zombie-infested drug store, anyone?) and now we might have to see the end of it. According to some fan theories, Glenn might not make it out of this season alive.

Of all the characters to get the axe on Walking Dead, Glenn's death on the show will definitely cause some outrage. He's been there since the beginning, and is as important to TWD as Carl is useless (i.e. REALLY). Remember when he was just a young walker-dodger in Atlanta? Remember his cute lil baseball hat? REMEMBER? Please don't take him away from us, Scott Gimple, please! There might be some hope for Glenn if the show decides not to follow the comics to the letter, and also because recent hints of a major character death could be attributed to someone else, but if not... well... break out the Kleenex, Glenn fans.

If you've read the comic or paid any attention to the rumblings surrounding the possible introduction of Walking Dead antagonist Negan to Season 5, it's no secret that Glenn's violent demise at his hands (or his barbed wire-wrapped baseball bat, more specifically) won't be too far behind. Glenn dying would be the absolute worst considering he's such a great character (if Glenn dies and Carl lives, I will riot in the streets), but at the same time, to introduce Negan and not kill him would be kind of a cop out since that scene in the comics is what really causes the rest of the events of the series because of Rick's desire to avenge Glenn.

Fans caught the reference to Negan in the Season 5 trailer, when it showed a man swinging a bat at Glenn's head (who we now know was just a Terminus goon), and Yahoo decided to ask executive producer and special effects make-up designer for the show Greg Nicotero about it:

Could they just be trying to throw us off? They kind of have a habit of doing that. Negan's addition to the TV show hopefully won't happen until the end of Season 5 at the earliest anyway, but according to The Spoiling Dead's Facebook page, Glenn's death scene may already have been filmed. They posted:

On the bright side, it's hopefully all just a rumor, and Glenn will make it through this season safe and sound. If not, I'll just move to a remote island to live in a cave where TV doesn't exist so I'll never have to deal with this emotional pain. Whatever.

More like this
Netflix Shut Down 'Bridgerton' S3 Rumours About A “Very Dark” Storyline
By Bustle
6 'Happy Valley' Easter Eggs You May Have Missed
By Sophie McEvoy
'The Last Of Us' Episode 4 Put Twitter Into An Emotional Spiral
By Alyssa Lapid
Bill & Frank’s 'The Last Of Us' Episode Has Twitter Emotionally Wrecked
By Alyssa Lapid
Get Even More From Bustle — Sign Up For The Newsletter
From hair trends to relationship advice, our daily newsletter has everything you need to sound like a person who’s on TikTok, even if you aren’t.