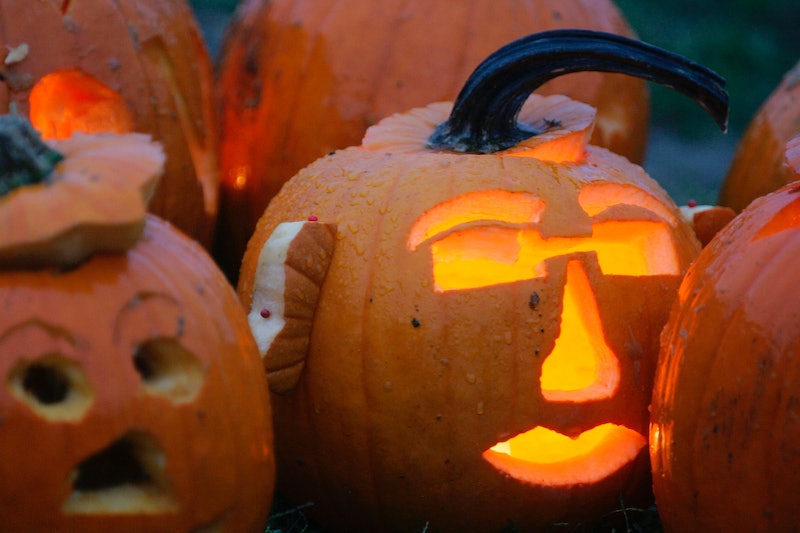 Is it just me, or does Halloween seem to bring out the worst in some people? Not that this is true for everyone, but there's something about October 31 that seems to lure the idiots out of their hiding places, and every year we find ourselves shocked by news of offensive Halloween costumes, parties, and pranks making the Internet rounds the next morning. On November 1st of every single year, I always see headlines that read: “[This Famous Celebrity] Donned Blackface On Halloween And It Backfired,” or “Girl Is Assaulted Because Her Ballerina Costume ‘Asked For It’.” You guys. This is not OK. Halloween is supposed to be the most fun holiday of the year. It’s a time to stuff our faces with fun-sized Snickers, bake cupcakes in the shape of little ghosts, and enjoy at least one cocktail named after an anthologized monster. Why are we still ruining this by being total morons?

Now, I get that some costume stores still sell Native American headdresses. They sell afros, ponchos, and Rabbi’s payots for insanely inflated prices, thus making it seem OK to actually wear them. It’s not. Throw away all those misconceptions about appropriating other cultures, genders, ethnicities, and religions like right now.

Also? I get that Halloween lends itself to humor, and sometimes we use comedy to combat and respond to very serious, horrible stuff. But I worry I’ll be seeing at least one ISIS costume this year. Joan Rivers is a definite possibility. Don’t do it! It’s demeaning, it’s offensive, and it may hurt others around you.

Look. I know most people aren't jerks, and a lot of what I'm about to say probably seems like common sense to most of us. The majority of revelers know how to have a good time without hurting others. But even so, it can't hurt to have a few rules in mind when getting ready to go out this Halloween. Here are some good guidelines to follow:

This includes (but is not limited to): Native American anything, chopsticks, kimonos, and tribal gear.

2. Do not dress up as a racial stereotype

The "Hey Amigo Mexican Costume" is still a costume that exists at Party City. It includes a poncho, sombrero, and a donkey. Just a friendly reminder: stereotyping is never cool or funny or OK.

Just… no. I’m not going to get history professor on you right now, but just know that in the 19th century, white men wore blackface when they wanted to portray caricatured black men in plays and films. Remember Julianne Hough’s Crazy Eyes costume last year? She got into crazy amounts of trouble, because you just don’t do blackface. Blackface in and of itself is symbolic for oppression, racism, and racial divide, and it is unacceptable.

4. Do not dress up as a controversial news story

You may think this is funny or clever or creative, but it's not. Someone is going to be offended.

5. Do not objectify people

If you see a guy only wearing a pair of leather pants, don’t whistle at him like he’s a piece of prime rib. Same goes for you, gentlemen. Just because a girl is dressed up as a “sexy” something, this doesn’t mean she wants you to ogle at her until you think she’ll come home with you. Treat people with respect.

For the love of pumpkin spice lattes, do not ruin Halloween for me by destroying all the pretty things! Also? Unless you’re going to clean it up, don’t just create messes on the street expecting someone will pick it up for you. And if you think you’re being clever by paying homage to your favorite band, just know that it has been done before.

7. Do not think you can do anything you want just because you’re wearing a costume

If you’re the Incredible Hulk for tonight, that’s awesome. It doesn’t mean you can go around breaking things and being obnoxious. You can take your costume and character seriously, but don’t be rude or obnoxious.

8. Do not dress up as the recently deceased

I swear if I see a Robin Williams costume, I will never do Halloween again. My heart is clearly too fragile for this wicked world. It’s TOO SOON y'all.

9. Don’t give your kids sexy costumes to wear

Don’t sexualize little kids. It’s disturbing. Dress them up as bumblebees and pumpkins, not Betty Boop and Britney Spears.

Going trick-or-treating as an adult — by yourself — is just not socially acceptable anymore. However, you can go around that by taking your siblings or cousins or neighbors. Plus, you will be infinitely loved and cherished and appreciated by those little beings.

11. If you’re going out, don’t forget to leave some candy by the door

Because the saddest thing ever is walking up to a dimly lit house that is clearly void of humans and candy.

12. Oh, and don’t skimp out. Tootsie Rolls and Smarties are on the lower echelon of the candy world, and we all know it

It’s all about Kit Kats, Skittles, and Twix. Don't be greedy.