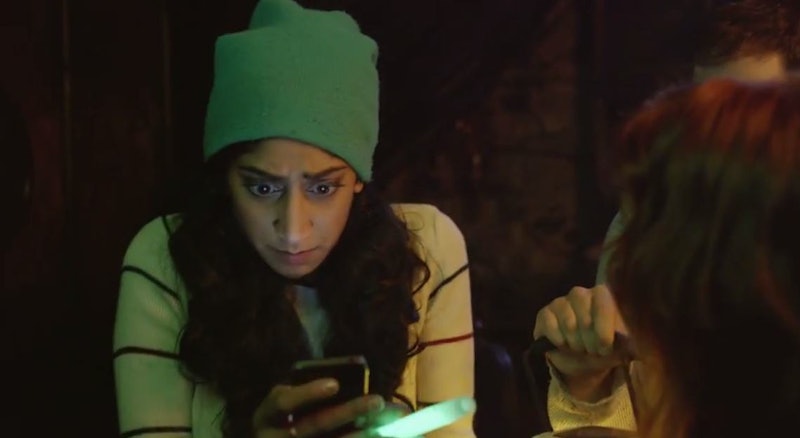 Pop quiz! What terrifies 20-somethings on Halloween the most? Is it ghosts? Goblins? Public speaking? As it turns out, it’s none of those things. It’s something more insidious — something which has the power to inspire the existential crisis to end all existential crises. Comedian Paul Gale knows what it is, and it can only be one thing: Loss of the Internet.

You’ll probably remember Gale from his two-minute summation of the entire Tinder rollercoaster or his revelation of why your Starbucks barista keeps spelling your name wrong. His latest offering is just as hilarious as his previous videos, and wouldn’t you know it? It’s exactly what you need to round out the horror movie marathon you might have planned. Written by Gale, directed and shot by T.J. Misny, and starring Gale, Sunita Mani, Lauren Ireland, Elyse Brandau, James Dwyer, and Alfred Rosenblatt, “What Terrifies 20-Somethings on Halloween” takes a look at what happens when five Millennials find themselves stuck in a freaky and presumably haunted old house. Why are they in this place? How did they get there? No idea, but they all seem to be doing quite well with the situation…

…Until disaster strikes. Gazing at her phone’s screen in terror, one them utters the most dreaded words in any 20-something’s vocabulary:

One by one, they all realize that although they have full bars, they have —gasp! — no data.

…But the chaos that descends upon the group then is nothing compared to what happens when Paul’s Internet returns.

He’s got a match. And she wants to get root beer floats. But of course nothing ever goes as planned, because then…

In the words of Darth Vader:

This tragedy, however, gives our intrepid heroes new purpose: Go forth and find power outlets! But what do you think they find? Here’s a clue:

That anguished face can only mean one thing: No outlets. No outlets means no power. No power means no data. This place? IT’S HAUNTED, YOU GUYS!

But wait! What’s this? This other face… The ancient iPhone 4 belonging to that face’s owner…

It’s terrifying how fast humans will turn on each other, though, isn’t it? Amidst the madness that ensues as they tear at each other, desperate for data, a horrifying sound rings out:

Guess what that means? You probably already know, but you should probably watch the video for the full effect yourself.

Not going to lie: I kind of wonder what these five tech-obsessed horror shows would think of Kenneth Goldsmith’s “Wasting Time on the Internet” class — or, even better, what Goldsmith would think of them. There’s using the Internet to help compose the greatest poem ever written… and then there’s this kind of Internet usage, which is kind of the digital equivalent of junk food: Full of empty calories. The Internet is great, but it can also be pretty great to unplug every now and again — especially if, y'know, you're trapped in a haunted house with an angry ghost waiting to eat your souls.

The whole video is hilarious, as well as a terrific commentary on the absurdity of where our priorities sometimes lie. Check it out below. What scares you the most?