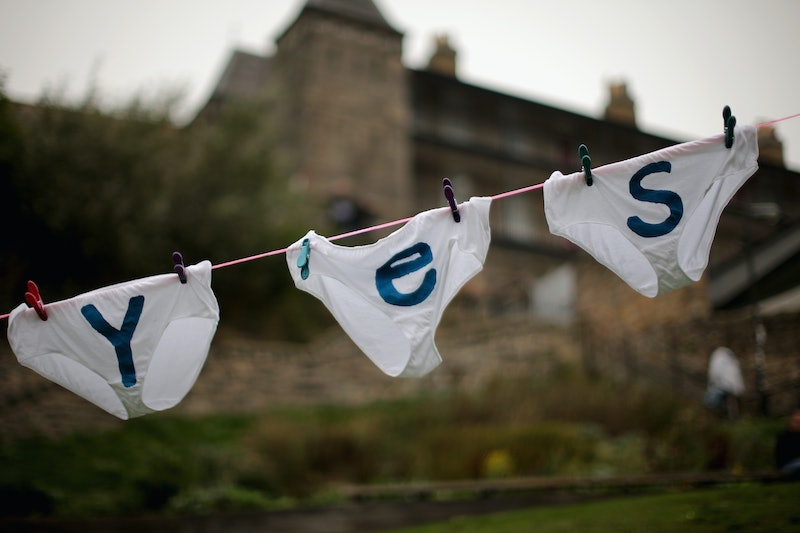 Have you ever found yourself eyeing the boxers on sale at Target, clutching your basket of thongs and wondering if you could get away with wearing men's underwear next time you wear a body-con skirt? The answer, in case you were wondering, is "only if you're willing to have panty lines more clear and defined than Channing Tatum's abs." If this situation sounds familiar, you're in luck, because a women's underwear company has designed the world's first gender-neutral boxer briefs, and holy crap do they look comfy.According to their website, creators Sylvie Lardeux and Abby Sugar first started Play Out Apparel in 2011 in New York City. As they write on the Play Out website, they set out to create "lesbian-inspired, gender neutral" designs that incorporate elements of male underwear. Currently, only the Garçon Manqué boxer brief is available for purchase, but a bikini and hipster cut are in the works and could be seen at New York Lingerie Fashion Week. They're meant for anyone to wear, no matter what gender they identify with, and they happen to look pretty fab on everyone.

These designs come after a month of progress in gender equality, such as Sweden's gender neutral pronoun, Harvard's Divinity School introduction of gender neutral bathrooms, and Nebraska's teacher training for transgender equality in the classroom, to name just a few. So not only are the designs super comfy looking, but they also support social justice! What's not to love about them?

The designs can be found on the Play Out Apparel website. Enjoy your gender-equal lingerie!