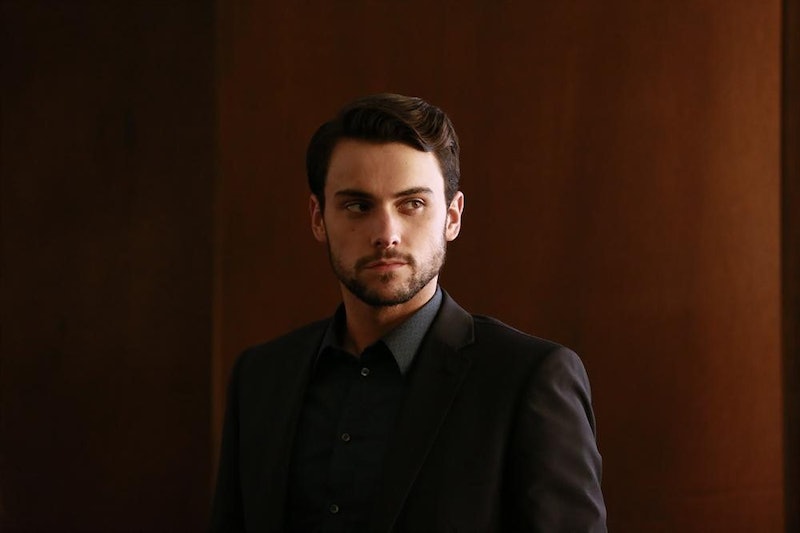 Between ABC's How To Get Away With Murder and FOX's The Mindy Project, TV these days is — like Meghan Trainor — all about that bass. In its fourth episode, "Let's Get To Scooping," which aired on Oct. 16, the newest drama from über-producer Shonda Rhimes raised eyebrows with How to Get Away With Murder's frank portrayal of sex between two men. Just one week earlier, writer/star Mindy Kaling caused a ruckus with her Season 3 episode "I Slipped," the plot of which centered around anal sex (although those two words were never actually spoken out loud). So which show handled the sensitive subject of butts better?

They both certainly deserve praise for tackling such a taboo topic. In HTGAWM, law student Connor Walsh (Jack Falahee) was seen engaged in a hot-and-heavy copy room hookup with a young office worker, Pax (guest star Niko Pepaj). There was plenty of passionate kissing, flashing abs, and implied action happening south of the border. Granted, this may not be exactly groundbreaking for anyone who has watched Queer As Folk or Spartacus, but the fact that it's airing at primetime on one of the Big Five networks is a pretty big deal (sadly). Almost more scandalous than the sex scene itself was this follow-up line from Pax: "He did this thing to my a** that made my eyes water."

The Mindy Project's "I Slipped" took a much more light-hearted approach to the tush talk, but still broke plenty of new ground. It was, without a doubt, the first network sitcom to devote the entirety of an episode to a plot about sodomy. In the opening scene, Mindy (Mindy Kaling) and Danny (Chris Messina) are getting it on, when the former suddenly shouts "That doesn't go there!" followed by latter responding with the episode's titular line. Danny initially pretends it was a mistake, then admits he tried it because he assumed Mindy had done it before.

Of course, the couple patches things up by the end of the episode, with Mindy stating, "If you want to try something freaky, just run it by me first." Fair enough.

But while plenty of viewers commended both shows for their honest depictions, neither show's exploration of their characters' rear ends was wholly without controversy. Obviously, some were upset by HTGAWM 's inclusion of any gay sex scenes whatsoever, let alone such explicit ones... although Shonda Rhimes shot that complaint down pretty quickly on Twitter.

But going deeper, others have been bothered by what they consider "bottom shaming" on the part of showrunner Pete Nowalk (who is also gay). Slate's J. Bryan Lowder lays out evidence of what he perceives to be Nowalk's prejudice against bottoms as "submissive" and "effeminate," as opposed to tops, who are portrayed as "powerful" and "masculine." Lowder then states:

It’s a shame that Nowalk and his co-writers felt, for reasons that remain opaque to me, that gay sexuality had to be rendered as a kind of game in which one is always striving to win at the supposed expense of the bottom, always angling “to do” instead of being “done to.”

As for Mindy, some viewers took issue with the show's dismissive attitude towards consent. Danny's blunder in the sack is used for comedic effect, although it could also be viewed as a form of sexual assault. Ms. Magazine's Brianna Kovan wasn't pleased, saying that it was "troubling" that "Mindy and Danny had lasted this long in a relationship [...] without discussing consent." She also claims the episode normalizes the overstepping of boundaries and, even more problematic, "focuses on Danny’s pleasure over [Mindy's] throughout the episode":

Acquiring sedatives so she can please Danny without being fully conscious; getting sex advice from Peter for the same purpose; and discarding her grandma’s bathrobe purely for Danny’s enjoyment. As the plot complicates, never does Mindy prioritize her sexual desires or her right to consent—an unfortunate and familiar narrative in women’s lives.

While both shows may have broken new ground in terms of content, both plot lines were executed imperfectly. But when is progress ever perfect? In my opinion, both shows should still be lauded for opening up a discourse around a frequently stigmatized activity. Was that discourse flawless? Of course not; but missteps can be just as valuable as successes: at least more people are having conversations about prejudice and consent than they were two weeks ago.

As HTGAWM 's showrunner has said:

Writing some real gay sex into a network show is to right the wrong of all of the straight sex that you see on TV. Because I didn’t see that growing up, and I feel like the more people get used to two men kissing, the less weird it will be for people.

So, in pursuit of helping Nowalk make it less weird, here are some GIFs of men kissing. Enjoy: