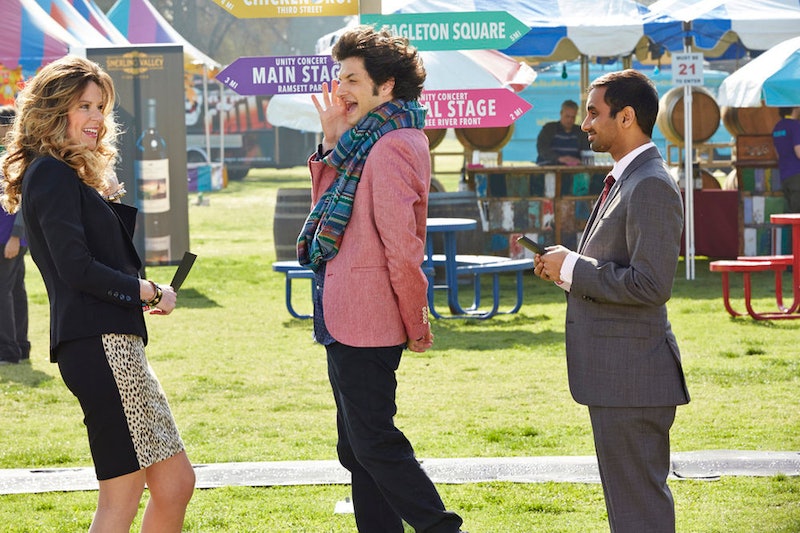 The fall season of television is already reaching its midway point, can you believe it? Not too many shows have been canceled, which usually means a good season. However, the season can't be very good if it won't include Parks and Recreation. That's right, we probably won't see the seventh and final season of Parks and Rec until 2015 on NBC. Boo! Amy Poehler told Seth Meyers this week on Late Night that the production is currently shooting the penultimate episode and writing the finale. These are such confusing emotions. I want my Parks back! But also I don't want it to end! What's going to happen to my favorite characters? I'm not talking about the major players. One of the reasons that Pawnee feels so special to so many fans is the rich ensemble they have created over the years. I jump out of my skin with joy every time I see Perd Hapley on Scandal. Every person in that town has a history and I care about them all. What's going to happen with Jean-Ralphio, for example? Here's what actor Ben Schwartz told Kristin DeSantos at E!: "I've already filmed one episode and I've been told I'll be coming back for more... something is very different with my character three years in the future." Dun dun dun!

If I was signing Pawnee yearbooks and I could only write "don't ever change" in one, it would be Jean-Ralphio Saperstein's. He's hilarious, a supportive friend most of the time, and open-minded as hell. What could be differnet about him three years into the future? Here are a few possibilities.

Tom Haverford is coming into success, so why can't his best bro do the same? Jean-Ralphio comes from a wealthy family. His father is the town's OBGYN. I think it would be interesting to see Mr. Saperstein as a super serious, maybe even evil, business man. We know he used to work at Lady Foot Locker and applied to work at the accounting firm that loves Ben Wyatt. We also know he was the most entertaining part about Entertainment 720, "where dreams come to come true." It would be hilarious to see Jean-Ralphio settled down in a boring career.

He'll Be In Medical School

Another hilarious option along the same line, since you can't just inherit a career as a doctor. Three years is just enough time for Jean-Ralphio to be in clinical rotations at the same hospital where Ann used to work. That would be a good reason to visit that familiar setting with a new, ridiculous twist.

He'll be entangled with Joan Calamezzo

I wasn't the only one feeling this, right? Joan has made so many passes at Tom, I'd like to see her have a win with Jean-Ralphio. We know one crazy pair likely coming up this season on Parks will be Councilman Jamm and Tammy 2. I think this would be just as wild. There's no way even Jean-Ralphio's big personality could survive the host of Pawnee Today. Joan will "gotcha" him up!

I mean, it could happen.