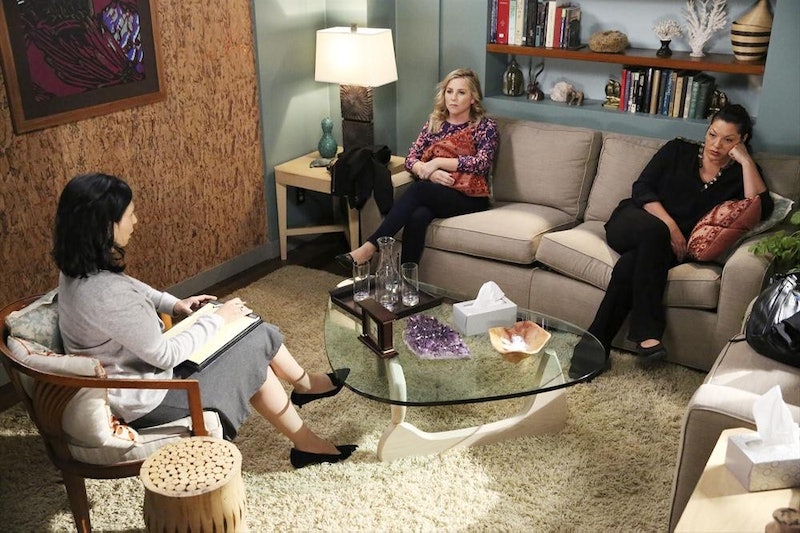 Oof... Last week's episode of ABC's Grey's Anatomy sure was a doozy, wasn't it? Callie Torres and Arizona Robbins have never had the most stable of relationships (they've seen more than their fair share of crashed vehicles and serious injuries), but Callie's episode-ending proclamation that she wants out of their marriage sure seems like the nail in the coffin. On the other hand, as much as Callie and Arizona have a track record for breaking up, they get back together just as often. So what's to say this time will be any different? Could this be just another bump in the road for the couple? Or is this finally the straw that broke Calzona's back? Not even showrunner Shonda Rhimes is saying. According to her interview with Entertainment Weekly, the couple has "literally a 50/50 chance that they’ll be together or apart, and I have not figured it out yet."

In order to determine what lies ahead for the troubled doctors, let's take a look at their past. After six years it's easy to forget all the ins and outs of their courtship, dating, and marriage. Is Calzona made of the stuff that lasts? Or was their relationship built on shaky foundation? Here are the biggest moments from Callie and Arizona's relationship, labeled with either a Happy Face (for the good moments) or a Frowny Face (for the not-so-good). Let's see which side wins, shall we?

After a rough break-up with Dr. Erica Hahn, a rebounding Callie met Arizona Robbins in the bathroom at Joe's about halfway through Season 5. The adorable peds surgeon flirted shamelessly with the ortho doc, and the sparks flew instantly.

Callie introduces Arizona to her dad ☺

A few episodes later, the pair were officially dating, and Callie was saddled with the difficult task of introducing her female partner to her conservative father. Carlos Torres was appalled, but rather than break up with Arizona, Callie severed ties with her own father. (Fortunately, they reconciled later.)

Arizona tells Callie she loves her ☺

Early in Season 6, after the heartbreaking death of a longtime patient, Arizona finally said the "L" word to Callie.

Halfway through the season, Callie came to the shocking realization that her girlfriend — the doctor who specializes in children — had no interest in having a baby. This created a major rift between the couple that lasted for most of the rest of Season 6.

When a madman shot up Seattle Grace and killed some of their friends, Callie and Arizona were quick to put their differences aside for the sake of love. Callie said she didn't need kids if it meant not having a life with Arizona, but Arizona countered by saying she would never deprive Callie of being a mother.

Arizona goes to Africa without Callie ☹

In Season 7, Arizona received a prestigious grant to go work in Africa for three years. Callie tried to be supportive about their big move, but was obviously reluctant to leave Seattle behind. Sensing that Callie didn't really want to leave, Arizona decided to go by herself... and left Callie alone at the airport.

Callie Gets Pregnant with Mark's Baby ☹

While Arizona was gone, Callie fell back into her pattern of casual sex with Mark Sloan. Arizona returned early from Africa — just in time to learn that Callie was pregnant with Mark's baby. Whoops!

Arizona got into a car accident and a very pregnant Callie went through the windshield. Dr. Torres survived, thanks to the efforts of her Seattle Grace colleagues, and her premature baby was delivered safely... but not before she hallucinated the entire hospital singing at her in the show's infamous musical episode, "Song Beneath The Song."

Grateful for their second (or third) chance at life, Callie and Arizona finally tie the knot at the end of Season 7, kicking off almost an entire year of relative bliss. Rhimes granted the newlyweds a reprieve, and not much of note occurred for them until...

In the Season 8 finale, the plane carrying Arizona, Meredith, Derek, Cristina, Mark, and Lexie crashes. Mark and Lexie both die, Derek's hand is crushed, and Arizona's leg is badly mangled.

It was revealed in the Season 9 premiere that Arizona's leg had been amputated post-plane crash — but it wasn't until the second episode, which featured flashbacks to the aftermath, that we found out why. Although Arizona begged Callie not to let them take her leg, when her injuries proved life-threatening, Callie gave the doctors permission to amputate. It was a decision that would cause Arizona to resent Callie for most of the season.

The couple wouldn't get physically intimate again until about two-thirds of the way through the season thanks to Arizona's resentment of Callie as well as her physical insecurities, but their return to happiness was short-lived.

As Grey Sloan Memorial prepared for a superstorm at the end of Season 9, Arizona hooked up with flirty Dr. Lauren Boswell in an on-call room. Callie found out when they accidentally switched scrubs post-coitus and she saw Arizona's wedding ring pinned to Lauren's shirt.

Season 10 kicked off with Callie moving out of her apartment with Arizona. While this was indeed sad news for Calzona as a couple, Callie actually seemed pretty happy — she finally got to dance in her underwear again. And Arizona spent their separation hooking up with intern Leah Murphy.

Callie asks Arizona to move back in ☺

Callie's dad tells her that he once cheated on her mother, and that if she hadn't taken him back, Callie never would have been born. This makes Callie decide to forgive Arizona, and she invites her wife to move back in.

Callie & Arizona plan to have another baby ☺

Calzona's relationship proceeds quickly post-separation. They soon buy a house together, and then decide they want to have another child. However, at the beginning of Season 11, Arizona is eager to pursue a fellowship that will take up too much of her time to have a newborn. These conflicting desires cause yet more friction in their marriage.

In the show's most recent episode, Calzona's therapist counsels them to attempt a trial separation, not even speaking to each other for 30 days. Although Arizona comes to realize in that time how much she needs Callie, Callie's conclusion is much different. She tells her wife that she enjoyed the freedom of being apart and needs more time to love herself. And then she walks out.

Counting up our tally, the Frowny Faces win out by one point. Not an exact science, I know — but it does indicate a general pattern of drama, infidelity, and frustration that has plagued Callie and Arizona almost since they met. Looking at that track record, it's hard to imagine things ever working out for the couple. So what does Grey's have in store for them?

We've seen Callie and Arizona reconcile and get back together so many times, that at this point it would feel redundant. Would this being the end for Calzona really be such a bad thing? We've seen so many relationships on Grey's disintegrate thanks to cheating (Callie & George) or resentment (Alex & Izzie) or even death (Richard & Adele). Maybe Callie and Arizona coming to a mutual and amicable decision to end their marriage would be the most surprising — and satisfying — turn of events that could happen to them at this point.

One thing is for sure: no matter what lies ahead for Calzona, there are bound to be many more tears shed before they reach that destination.