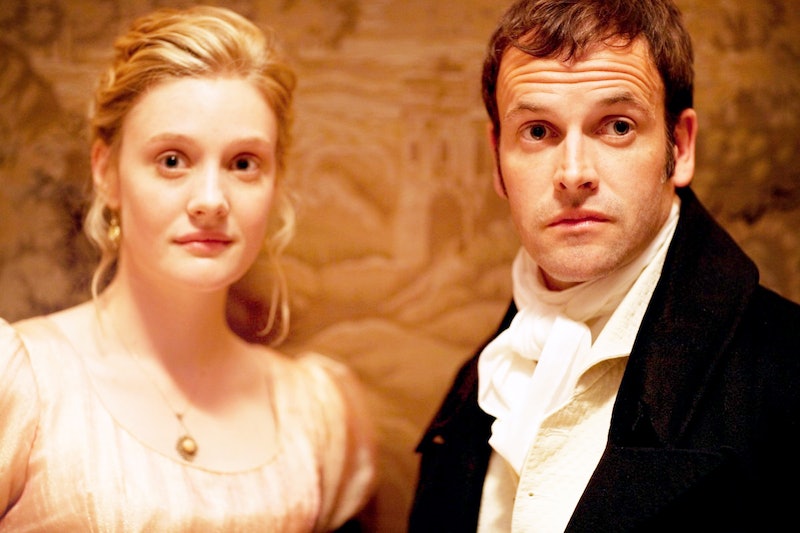 Every single Jane Austen hero — maybe every literary hero, period — lives in the shadow of the much obsessed-over Mr. Darcy. In the two centuries since Pride and Prejudice was published, he has inspired countless other books — from the sultry (Undressing Mr. Darcy) to the supernatural (Mr. Darcy Bites Back).

If Mr. Darcy were a TV show, he’d be Downton Abbey, and no, not just because he’s British. The analogy comes from the fact that he has a large, devoted fan base and they can never get enough of him. Austen’s other leading men, on the other hand, are like local cable access shows; they’re mostly overlooked and sometimes completely underrated. In particular, Mr. George Knightley of Emma is being shafted by Austen aficionados everywhere.

I’d be lying if I told you that Emma was one of Jane Austen’s best books. Although I firmly believe anything she’s written is worth a read, your high school English teacher was right to assign Pride and Prejudice instead. Nonetheless, Emma gives us Mr. Knightley, a hero without the cult following but equally worthy of fanfic. (Tell me A Night with Mr. Knightley isn’t just begging to be written.) Like Mr. Darcy, he’s an attractive and wealthy gentleman, yet still unmarried despite the fact that he’s an obvious catch. In fact, on paper, Mr. Knightley seems like the one fans should be swooning over.

Mr. Darcy is aloof; Mr. Knightley is all congeniality

When Mr. Darcy first arrived in Hertfordshire, it took about five minutes for him to alienate the townspeople. It turns out that’s what happens when you act like you’re better than everyone. Over the course of the novel, he learned how to be more tolerant, but does a tiger really change its stripes? He doesn’t strike me as the type to ever warm up to more than a select group of people.

Conversely, Mr. Knightley is the guy you can bring anywhere. He’s universally liked and completely comfortable dealing with people from different social backgrounds. It was his influence that helped Emma become more compassionate.

Mr. Darcy is a fixer-upper; Mr. Knightley is a dream house

We all have our opinions as to why women go for men they want to change, so I won’t get into that. Instead, I’ll just say this: Unlike some heroes we know, you don’t see Mr. Knightley going around and proposing to women with the oh-so flattering disclaimer that it’s against his better judgment and in spite of their tacky families. Where Mr. Darcy had to overcome his shortcomings to win over Elizabeth, Mr. Knightley was always Emma’s gold standard of men.

You’ve got to give a guy credit for finding the guts to launch Proposal 2.0 to a woman who once turned him down flat. But did Mr. Darcy really think he’d be rejected? By that time, it was clear that Elizabeth’s feelings about him had gone from night to day. I do give him major points, though, for following his heart, society be damned.

Mr. Knightley didn’t have any potential haters to worry about, except for Emma herself. He knew she cared about him, but he didn’t know if those feelings included butterflies and a racing pulse. With his brother married to her sister, making his move meant risking one of his oldest and strongest friendships, as well as creating a lifetime of really awkward family gatherings.

Given how great Mr. Knightley is, why does Mr. Darcy get all of the glory? What does he have that Mr. Knightley doesn’t? For all that I love the latter, it’s still Mr. Darcy who sets everyone’s hearts aflutter — even in spite of his horribly unsexy first name, Fitzwilliam. What it comes down to is this: Not only is he fantastic in his own right, he also benefits from being surrounded by a much more likeable cast of characters, especially his leading lady. As Jane Austen herself admitted when she wrote Emma, “I am going to take a heroine whom no one but myself will much like.”

Well, mission accomplished, Jane. No matter how sweet it is that Mr. Knightley sees Emma as “faultless in spite of all her faults,” without an Elizabeth Bennet to work with, the unlucky dude is doomed to always be the poor woman’s Mr. Darcy. It’s time for me to face it: If even being portrayed by Paul Rudd in Clueless, the modern-day adaptation of Emma, couldn’t elevate his literary heartthrob status, nothing ever will.

More like this
Prince Harry Incorrectly Recites Christina Aguilera’s “Genie In A Bottle” Lyrics
By Jake Viswanath
I Read Prince Harry's 'Spare' So You Don’t Have To: 11 Highlights To Know
By Marina Watts
Everything To Know About The 'Daisy Jones & The Six' TV Series
By Maxine Harrison and Brad Witter
Hilary Duff Is “Optimistic” About A 'Lizzie McGuire' Reboot
By Alyssa Lapid
Get Even More From Bustle — Sign Up For The Newsletter
From hair trends to relationship advice, our daily newsletter has everything you need to sound like a person who’s on TikTok, even if you aren’t.