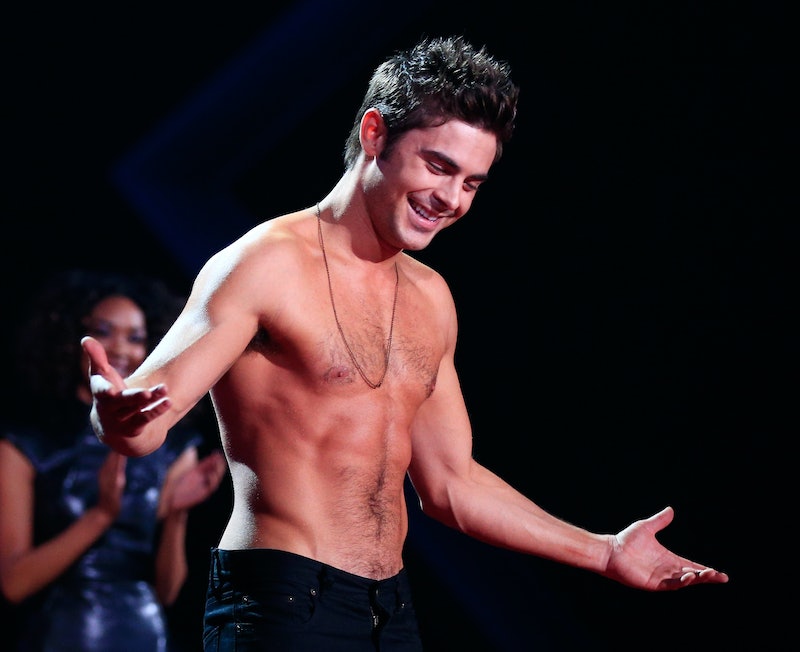 Zac Efron, Troy Bolton of our hearts forever more, is getting serious with his rumored girlfriend Sami Miro, whose name has the artistic sound of an excellent disc jockey, music producer, or fashion designer. Seriously, her name just exudes hip-happening-ness. If you're wondering — as anyone with an interest in Efron is, I'm sure — she’s some sort of vintage fashion entrepreneur from what I can tell. As for what they've been up to, Zac Efron took Sami Miro to a friend’s wedding in Chicago this week, so I assume things are getting serious. He wouldn't just bring anybody to pal chef Dave Beran's wedding, would he? Because I certainly would've signed up if that was the case.

The duo also took a trip to Amsterdam for Efron’s birthday, but I don’t read into that much, as Efron seems to take lady friends on European jaunts the same way some guys take you to a coffee shop for a date. Of course, all of this speculation on Efron’s love life made me start to wonder what he did with his past paramours. And that made me realize that he has quite a variety of exes. There doesn’t seem to be a particular type — which is good because I don’t believe in a person having a type — but from what I can tell looking through from Vanessa Hudgens to Michelle Rodriguez, if you want to be Zac Efron's lover, there are a few things you have to do.

The mystery of Michelle Rodriguez and Efron might never be solved, seeing as many headlines scratch their heads over their split after two months of summer fun, categorizing the affair as a summer fling forevermore. But a huge takeaway from this relationship is certainly these attractive photos of the couple horseback riding in water. They really committed to summer fun jet skiing, yachting, and partying in Ibiza with pals.

The quickest way to a man's heart is through cinematic horseback riding, right?

You Gotta Be OK with His Flexing

Or women plum taking his shirt off as Rita Ora did at the MTV Movie Awards this year. And while Efron might be your man, remember that his cut bod is just part of the job. Remember that sharing is caring.

You Gotta Make a Mean Smoothie

When Efron broke his jaw last year, his girlfriend at the time Lily Collins was there to take care of him and keep his strength up with nutritional smoothies, made of vegetables and fruit as opposed to my smoothies which are actually just peanut butter and chocolate milkshakes with a banana. The banana makes it a healthy smoothie right? Efron, here I come.

You Gotta Dance to Prince

As we all know, this Wildcat has some moves, and no, I'm not ashamed to admit that I have watched all three High School Musical films. In a recent cute story about Miro and Efron, the alleged couple had a sweet date at Chicago's Chop Shop for sandwiches, and when the DJ started spinning some Prince tunes, he reportedly pulled her up to dance, because nothing says romance like random dancing. A source heard Efron jokingly inform Miro that "this is how you dance to Prince," which I can only assume is having a stomach filled with a veggie panini and being spun around quickly.

Actually, that sounds vomit inducing, but then again so does romance. Maybe you just have to be prepared for such adorable shenanigans when dating the incredibly cut Efron. If his blue eyes don't entice you to follow his lead toward dramatic horse rides in Europe or spinning in a sandwich shop, I don't know what will.