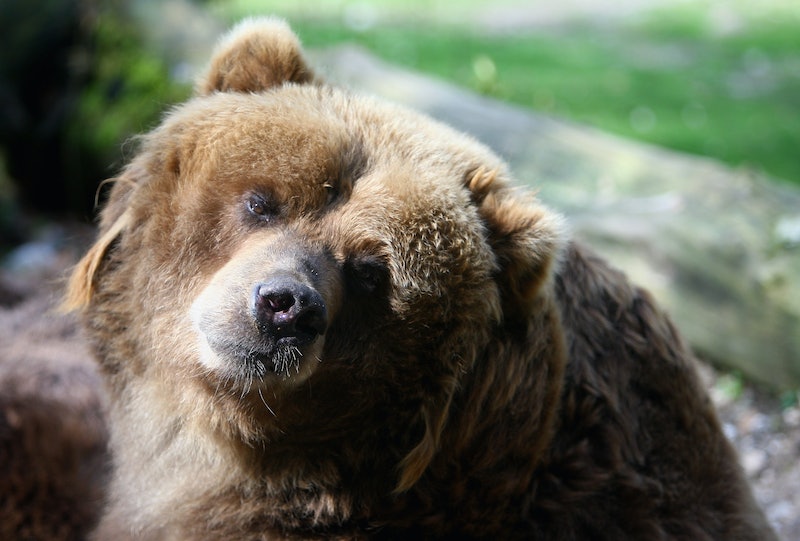 There is a scourge that has overrun Lake Tahoe, but fortunately the local officials are on it. It seems that Lake Tahoe visitors are taking too many bear selfies. Yes, bear selfies. Selfies with bears. In fact, the problem has reached the point where Tahoe officials have had to order people not to take selfies with the bears.

One would think that it would be common sense to know that, when you see a potentially deadly wild animal, you should stay back and give it plenty of space. But it seems that as our phones get smarter, our people get dumber, and nowadays, seeing a bear doesn't inspire caution so much as the desire to rush forward and snap a selfie.

“We’ve had mobs of people that are actually rushing toward the bears trying to get a ‘selfie’ photo,” spokesperson Lisa Herron for the Lake Tahoe Basin Management Unit told the Reno Gazette-Journal. “It is presenting a safety issue. We are afraid someone is going to get attacked.” Plus, making the bears feel crowded or threatened is also bad for bears — bears that attack humans, even if they were only reacting defensively, are killed. Poor bears. It's not their fault people are so stupid.

Unfortunately this isn't the first time officials have had to step in to keep people from taking selfies with dangerous animals. New York recently outlawed tiger selfies after a tidal wave of bros in search of the perfect Tinder picture raised safety concerns at fairs and circuses. Will people never learn?

As someone who grew up in place full of hiking trails and bears, let me impart this bit of wisdom to the selfie takers out there. Bears may seem calm and docile, and if left alone they generally are, but if a bear feels threatened — like, say, if people are approaching it while talking laughing loudly — the bear will attack. And if the bear attacks, you are screwed. Bears are fast. They can run, they can climb, they can swim. They are huge, and they have very sharp claws and very sharp teeth.

I mean, jeez, you wouldn't think that people would need to be warned to stay away from these things. But apparently in Lake Tahoe people are not only approaching bears, but are leaving trails and crossing creeks in pursuit of that perfect photograph. There were even people crowding close to a mother and cubs last week, which is about the most dangerous thing you can do; get between a mother and her cub, even accidentally, and you are not getting away unscathed.

Seriously, does no one have a sense of self-preservation anymore?

Lake Tahoe officials say that if the problem persists, they will stop letting people into the sections of the park that generally attract bears. So maybe if the threat of being maimed and killed doesn't deter these selfie seekers, knowing that they risk ruining things for everyone will do the trick. Or maybe we could just all gain a few survival instincts and not antagonize wild animals. Any of these options are fine with me.