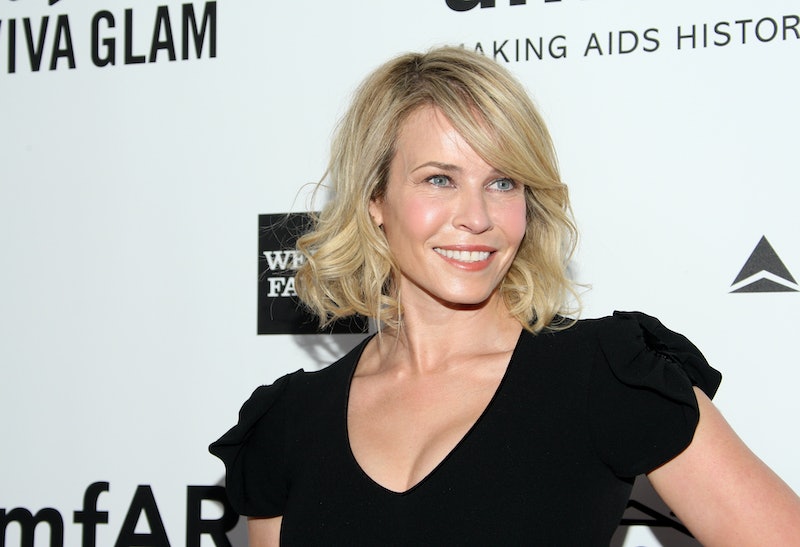 I'm really starting to side-eye Instagram these days, especially every single time I hear of another incident of their shameless double standards with regards to nudity. It started, unsurprisingly, with Rihanna's account being temporarily deleted because she posted racy Instagram photographs of herself from a photoshoot. She became one of the first mainstream celebrities to support Scout Willis' Free the Nipple campaign and now it's looking like Chelsea Handler might become the latest. On Thursday, Handler posted topless photos to Instagram that exploded into a stand against sexism and I think she deserves a round of applause.

Let's start with the fact that Handler wasn't posting the topless photos because she was looking to scandalize people. This isn't Miley Cyrus' Instagram. (Yes, I went there.) Instead, she was doing a parody. Handler's photo of herself topless on a horse was posted side-by-side with a photo of Vladimir Putin shirtless on a horse (warning: nudity), because that was what she was poking fun at. According to The Wrap, the image was taken down in 20 minutes — at which point Handler posted it again along with the caption, "taking this down is sexist. I have every right to prove I have a better body [than] Putin."

She added a picture of the message that Instagram had sent her about their content guidelines with the caption, "how you can keep Instagram safe if a man posts a photo of his nipples, it's ok, but not a woman? Are we in 1825?" Her final attempt to repost her topless photo came with the caption, "if Instagram takes this down again, you're saying that Vladimir Putin Has more 1st amendment rights than me. Talk to your bosses." Naturally, every time she posted the photo it was taken down, leaving nothing physically remaining in her Instagram aside from this:

Handler is continuing the point that Rihanna made, that the Free the Nipple campaign has been trying to make: that there is a ridiculous double standard when it comes to male and female nudity. It's even inherent in our language. When a man is baring all, he's usually said to be "shirtless". When a woman is baring all, she's usually said to be "topless". That sort of language implies that a man has done nothing more serious than pulling off a shirt while a woman is lacking a top, which sounds a lot more painful and scandalizing than it should.

Quite honestly, the only difference between a woman being shirtless and a man being shirtless is the fact that women have breasts and most men don't. But even that seems to be considered less scandalizing, because many times you can show a hint of boob as long as there aren't any XXX rated nipples on it. It's absolutely ridiculous and the fact that Handler has joined the numerous celebrities taking a stand against the double standards present in the Instagram content guidelines is commendable. If Instagram doesn't want to allow female nudity on their site then that is their right, but they should also put a blanket ban on male nudity. Otherwise, they will be forever seen as victimizing women with their Victorian sensibilities and that's just unfair to all involved.