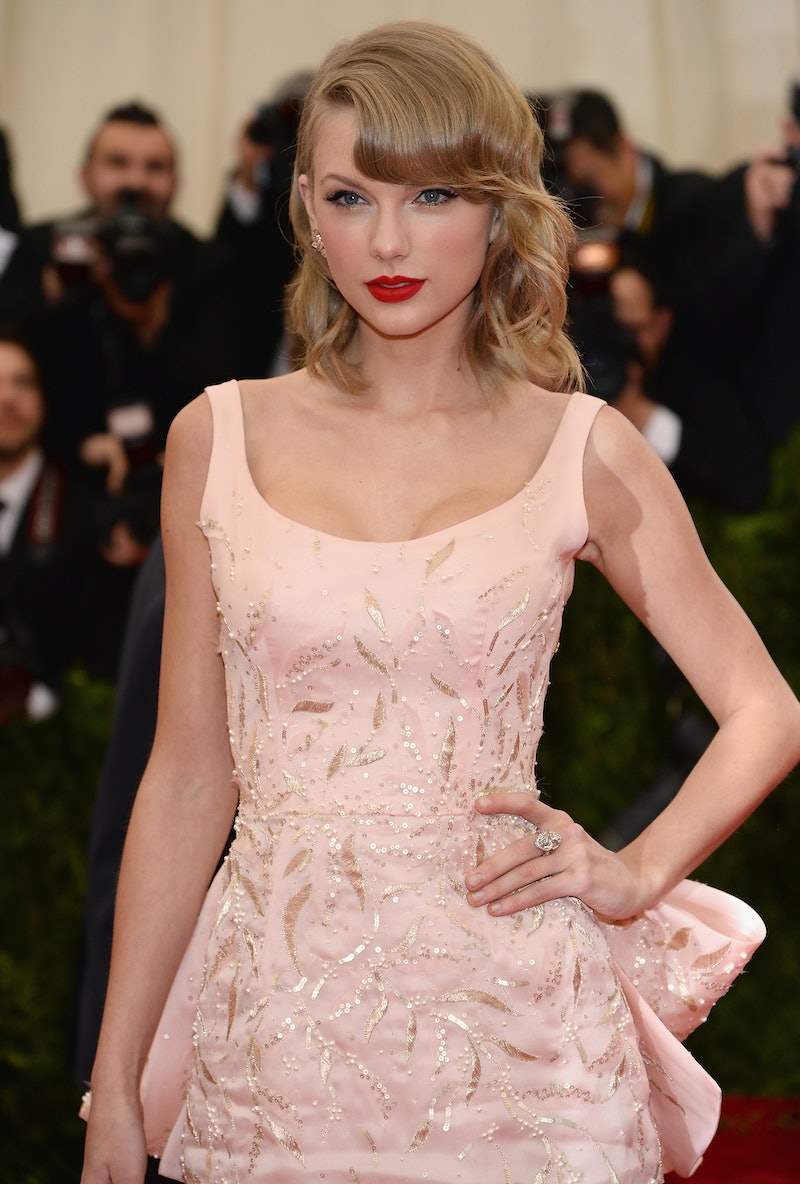 There are two Taylor Swift subjects that I just can't get enough of right now. The first is the release of her fifth studio album 1989, noted to be the first album that Swift has written during a dating hiatus that seems to have made her much happier than any of her relationships have. The second is Swift's feminist awakening, which has led to her speaking out about all kinds of sexism and double standards when it comes to her or any of her many celebrity lady friends. In an interview with British Cosmopolitan, Swift discussed gender inequality in public perception and, as usual, she was on point. Unfortunately, it's because she's a living example of that inequality.

Even now, the pop star's designation in mainstream culture is as "the girl who writes songs about her exes". We're not washing away history here. Swift has written lots of songs about her exes and spoken about writing songs about her exes and even named those exes who have songs written about them. (I'm looking at you Joe Jonas and John Mayer.) However, as she pointed out in a different interview in which she called out double standards, she's not the first nor will she ever be the last songwriter to write songs about their exes. Please, name a single songwriter who has never done that. Seriously, I'll wait.

Even worse than the sexist dismissal her songs receive as being "fluffy love songs from a woman scorned" is the fact that Swift still hasn't entirely escaped this rash judgment. She has been on a dating hiatus since her break-up with Harry Styles in late 2013/early 2014, has done very little besides assert her independence, hang out with all of her girl friends, and post selfies with her cats, and yet, now that she has produced music from this self-exploratory time in her life, her romances are still all that we can talk about. Everyone is counting how many songs on 1989 are about Styles. Every interviewer is asking Swift questions about her love life and why she's choosing to be single.

"I don't know how I would ever have another person in my world trying to have a relationship with me, or a family," said Swift in the interview with British Cosmopolitan. "The best answer I can come up with now is ‘go at it alone.' Life can be romantic without having a romance. I'm very attracted to how happy I am now." It's a message that she has had to repeat over and over again. The fact that she can produce an entire album that she herself said was partially to prove to her critics that she can produce good music without a man and she is still getting asked why she doesn't have one yet is ridiculous. How many times can Swift tell us that she isn't interested in dating right now before we stop asking her that question?

Quite honestly, it's things like this that I believe are the reason that Swift had her feminist awakening. Oh, sure, there were a lot of factors involved in her support of the movement. There's her friendship with Lena Dunham, there's her education on what the word feminism actually means, and there's her own independent research into how far society still has to go to achieve equality for men and women across the board. However, while Swift has matured, it seems that popular conceptions of her are still years behind. No longer is she that vindictive woman who deals with her heartbreaks by writing a pointed song in an ex's direction with equally pointed quotes enabling people to figure out exactly who her song is talking about. No longer is she, by her own admission in the 1989 album forward, the girl who said she would never "find happiness in a world where she is not in love".

If there's one thing we've learned from 1989 and from her interviews promoting the album, it's that Swift has matured into an active feminist who knows who she is and what she wants. She's not looking for love and her priorities at the moment appear to be her cats, her music, her fans, and learning as much about women's issues as she can. She's more than succeeding in the latter, as her take on double standards in British Cosmopolitan proved: "My girlfriends and I talk a lot about feminism and the inequality between the way men and women are talked about. The kind of things we say are, ‘Why is it mischievous, fun and sexy if a guy has a string of lovers that he's cast aside; loved and left? Yet if a woman dates three or four people in an eight-year period she is a serial dater and it gives some 12-year-old the idea to call her a ‘slut' on the internet?' It's not the same for boys, it just isn't and that's a fact."