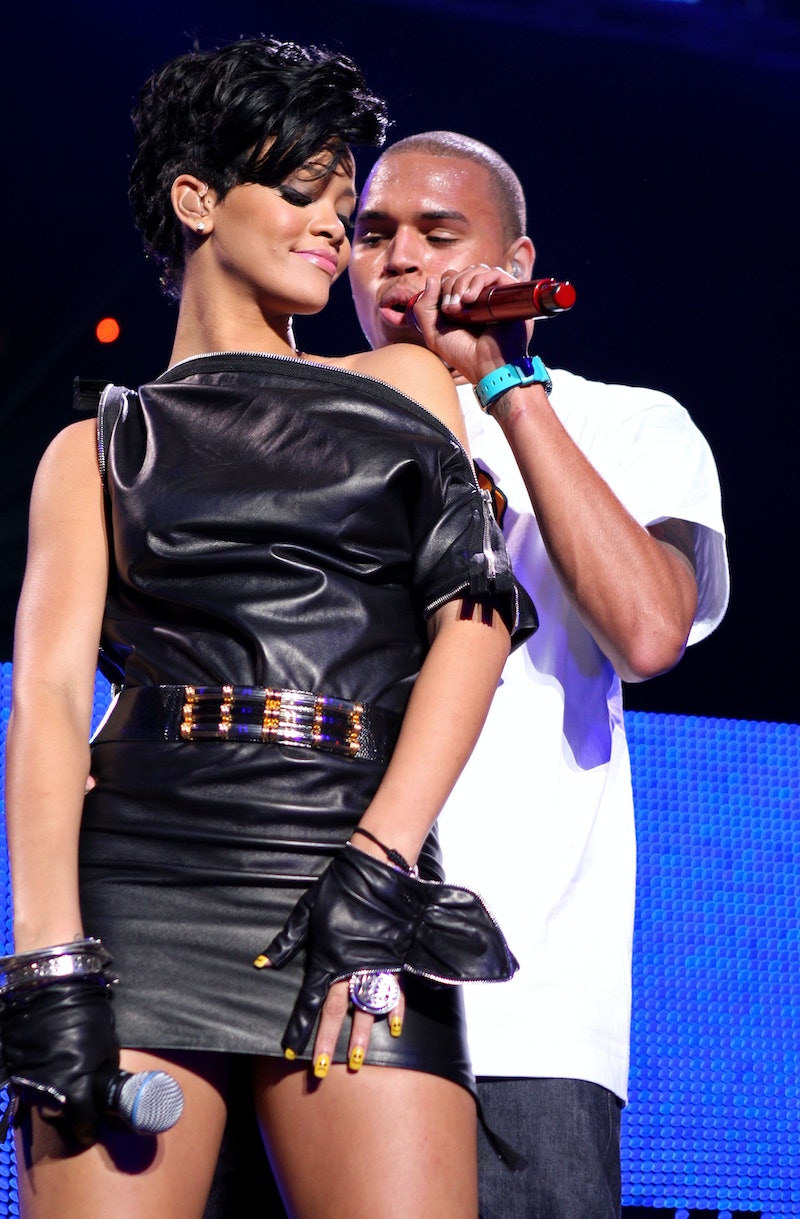 I will never get over the love triangle of Chris Brown, Rihanna, and Drake. I read every single headline, tweet, and meme about it. I am ashamed, but I still follow it all. Chris Brown stopped by radio station Hot 97 and, of course, the conversation turned to his past relationship with Rihanna and how he believes Rihanna purposely dated Drake to hurt his feelings.

Although Chris Brown has been dating Karrueche Tran for a while now (albeit on and off), Rihanna is always a part of the conversation in his radio and magazine interviews. I can only imagine how much Karrueche Tran has to be miffed by that, but no matter how Tran feels, Brown has to be a little bit over talking about Rihanna and Drake all the time. Doesn't he have a song to promote or something? There wasn't much mention of that in the interview, by the way. Instead, Brown was asked if he thought that Rihanna dated Drake to purposely mess with him, and he said, "She's gonna be mad if I say this, but in a way I do." Another interviewer chimed in saying, "She wanted to hurt you a little bit," and Chris Brown confirmed that thought by saying, "Yeah I do a little bit."

Honestly, I watched a video of the whole radio interview and I have to say that this was definitely a calmer, more together Chris Brown than we are used to seeing and I enjoyed most of the interview. However, I definitely disagree with this idea of Rihanna having a relationship with someone just to hurt Chris Brown. I feel like Rihanna does not really care what Chris Brown or anyone thinks of her. Rihanna looks after Rihanna and would never do that just to be spiteful. I could never picture her wasting her time dating Drake only to upset Brown.

Why do I think that? Rihanna does not give a damn about anything or anyone. I mean that in a badass kind of way. Not in a heartless witch sort of manner. I do believe that Rihanna has a heart and cares about others, but she's not afraid to express herself and stand up for what she believes in over anything else. Here are a few examples from Rih Rih's past that back that up:

Instagram has gone downhill since Rihanna's account was deactivated. Scrolling through my home screen is now devoid of joy. The singer had the best Instagram account — she posted the funniest memes, threw the best shade, and found so many new ways to be naked. The girl was a true a innovator with her captions and hashtags too. That was until our beloved @BadGalRiRi got the boot from the social networking site. Rihanna posted photos with her nipples exposed and Instagram responded by removing the photo and telling her to censor the rest of her posts. Rihanna did not listen and her account was banned. This didn't stop her though. Now, Rihanna posts photos on her Twitter page. She didn't let the social network take her down. This one is clearly Instagram's loss.

She Told off CBS

CBS was planning to use Rihanna's track "Run This Town" for Thursday Night Football broadcasts. However, the network decided to pull the song in light of the news about Baltimore Ravens player Ray Rice's domestic violence considering the song was going to be played for the first time before a Ravens game. This was a move that I did not agree with because it was ultimately punishing a victim of domestic violence. This angered Rihanna and she called out CBS with an aggressive tweet. Rihanna put standing up for herself above whatever business deal she had with the network. She was not going to bow down just to please some network execs.

She Told off MTV

When MTV tweeted "Yikes. @Rihanna’s marijuana photos from Coachella spark controversy," (tagging her in the post, mind you) Rihanna wasn't going to let that one fly. She immediately responded by mentioning the network in a tweet about how she ran out of f--ks to give. MTV helped propelled Rihanna to stardom and supported her career from the start, but she just tweeted what she wanted to say. No one could ever accuse Rihanna of being a brown noser. She clearly earns any accolade that comes her way from MTV.

She Dated Chris Brown More Than Once

After Chris Brown domestically abused Rihanna and the pictures went public, it was a tough image to shake. The world hated Chris Brown. He was public enemy number one for a while and is still an extremely polarizing figure. People loved Rihanna and wanted her to stay away from Brown, and there was a strong public reaction when the two got back together. Being seen with and actually dating Chris Brown after that ordeal was not a good PR move by any means. Rihanna was just following her heart and tried to make her love work.

Yes, Rihanna has been known to have some outbursts here and there, but this explosiveness is part of what makes her so interesting. You never know what you are going to get with her. However, you can bet that Rihanna is making decisions with Rihanna in mind, not her management, not Drake, and not Chris Brown.