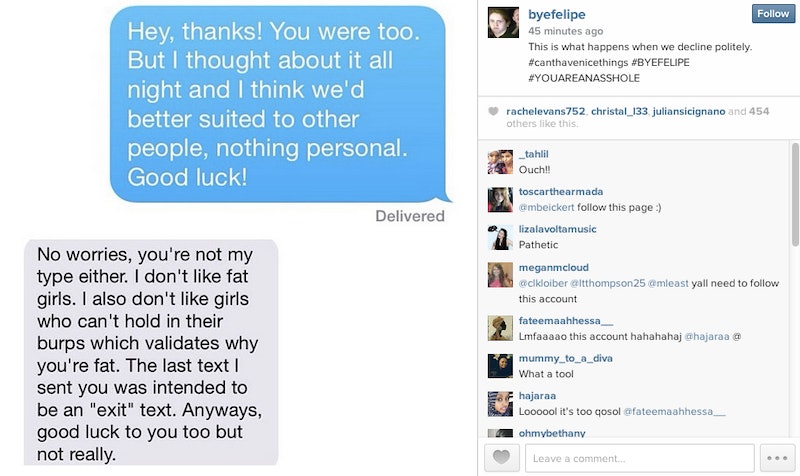 The world of digital dating is a fraught one, full freaks, creeps, and the just generally annoying. Which is why the @ByeFelipe Instagram account dedicated to gross online dating messages is the best idea since Straight White Boys Texting.

Everyone knows that there are a lot of irritating guys out there in the online dating pool. From the guy who made his profile picture his bank statement to the guys who get sexual way too fast to everybody who's ever made it to Tinderline. But then there are guys who get creepy. Guys who throw tantrums or make threats when rejected, and just generally make online dating not the usual amount of bothersome, but downright awful. Guys on @ByeFelipe run the gamut.

Sometimes those messages can make you feel unsafe — after all, it's well documented that women face much higher rates on online stalking and elevated rates of violence in general, and it's no wonder that people are clamoring for ways to make online dating safer. Other times, it seems more like just a guy throwing a temper tantrum because he didn't get his way — which is still creepy given what it implies about this guy's feeling of entitlement towards women. But either way, collecting those disproportionate responses together is a brilliant idea.

From the mockable to the disturbing, you have to check out the conversations immortalized on the Bye Felipe Instagram account. It's hard to believe these people really exist.

Now there's some classy gents. To check out even more, follow Bye Felipe on Instagram. I have a feeling they won't be running out of material any time soon...