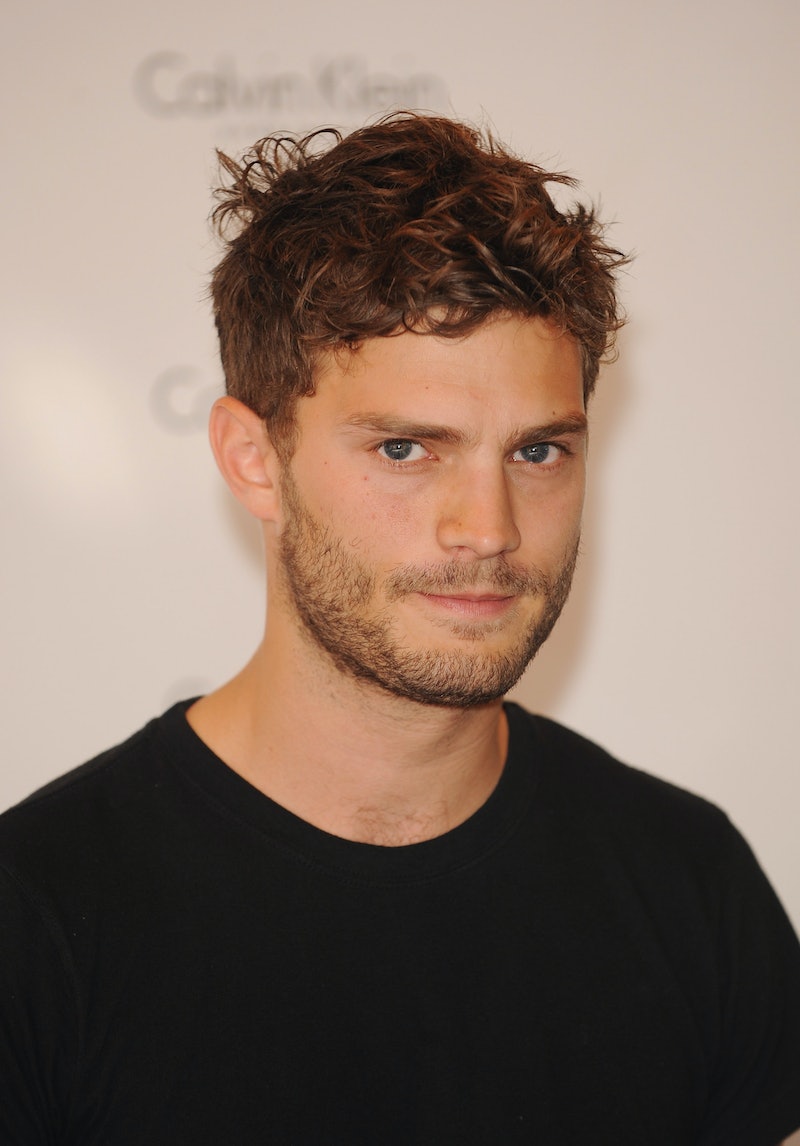 Fifty Shades of Grey fans might need to sit down, depending on the real reasons they were saving their money to buy enough tickets to see the film four hundred times. Apparently, Jamie Dornan's Christian Grey will not be full-frontal in the movie. Not in the film proper and not in the explicit version. These days, you have a better chance of seeing Ben Affleck's penis in Gone Girl, a psychological thriller about kidnapping, murder, and destroyed marriages, than you have of seeing Dornan's penis in a romance movie about kinky sex acts. However, that is not, to me, the most unusual part of Dornan's interview with the Observer. Dornan, a self-described feminist, spoke up in defense of Fifty Shades and its accusations of anti-feminism.

"I think it’s very hard to argue that when it is all consensual. Half the book is about making contracts. Permission and agreement that this be done. There’s no rape, no forced sexual situations," he said. According to The Hollywood Reporter, Fifty Shades has come under heavy criticism for glorifying sexual violence against women — in addition to the criticism of its inaccurate and damaging portrayal of the BDSM community and practices and the rape-y undertones of Christian's relationship with the more naive Anastasia Steele. Add that to the fact that Fifty Shades has also been proven to have a link to abusive relationships and eating disorders and the book and film series just plain have a lot to answer for.

In light of that, my question becomes how Dornan can reconcile his feminist views with participating in a film like this. I understand that actors need to make money and that not everyone can be Robert Pattinson and talk crap about the Twilight franchise at every available opportunity — not that Pattinson was the only Twilight star who seemed to cheer when their role in the films were complete. However, it seems strange that he would sign contracts to participate in the film of a book that has received so much criticism for its treatment of women, let alone that he would defend it as being undeserving of that criticism.

The only way I could see for Dornan to have reached this conclusion is if the films take place in a different universe from the books, which certainly seems to be the case if he was able to say of it that "there might be some suggestive elements to it, but I haven’t seen it at this stage, so it is hard for me to say". Might be some suggestive elements to Fifty Shades of Grey? Might? Are we talking about the same work here? The fact that the film is more of an interpretation of the book than a shot-for-shot remake of every single moment could be promising because it means that some of the more problematic elements from the novel might be redone, rewritten, or outright removed from the film itself.

My personal problem with Fifty Shades of Grey was that Ana did not know enough about what she was consenting to in order to properly consent to it — and several situations in which Christian outright ignored her desires or used sex as an actual punishment — and I didn't exactly have high hopes that the film would change any of that. The trailer alone seemed pretty much on par with everything that Fifty Shades of Grey had taught me to expect.

The fact that Dornan is speaking out on behalf of the film, and speaking as a feminist when he does so, might be an indication that I should at least attempt to be more open-minded going into that theater. As anyone who has ever had their favorite book adapted into a film can tell you, the film of the book is always different from the novel. I just hope in this case that it's better, not worse, than the book in the ways that matter.