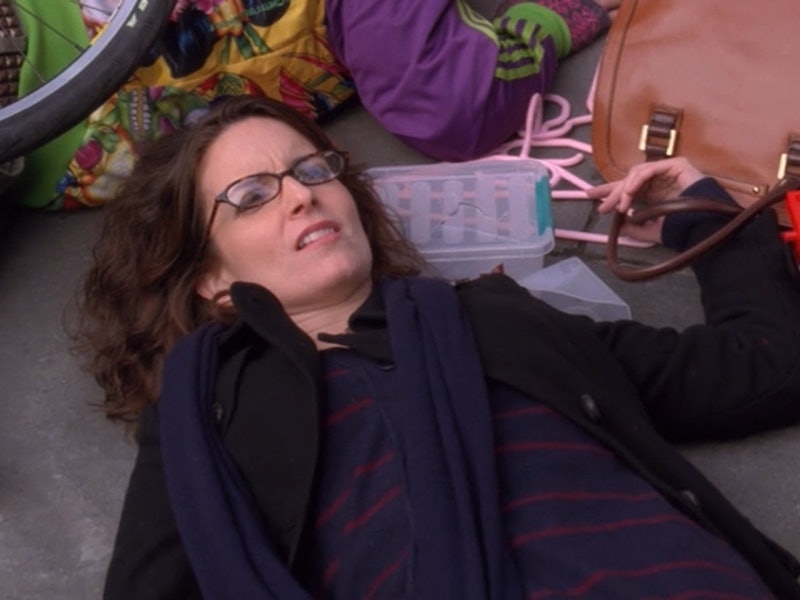 I was raised not to overshare, to "be a lady" (a directive that I now understand is pretty problematic in a lot of ways, but that's a whole other issue). But unfortunately for everyone around me who is sickened by the idea of giant blood clots coming out of a vagina, oversharing is precisely how I express my ladyhood. In case it didn't already occur to you, I am writing to you today about menstruation. Periods. Uterine gook. Alright, now that we've broken the ice and weeded out the weak-stomached, it's time for us all to fess up: We have some weird thoughts when we're on our periods.

It's not like we can help it. Everybody is fascinated by periods, whether they want to be or not. There is so much weird lore about menstruation. Menfolk, to be totally self-involved about it, can't help but wonder how it affects their sex lives, to the point where they have gone so far as to create period-themed panties (thanks, patriarchy!). It's gross and icky and mystifying, and while I don't broadcast about it like I'm talking about the weather, or use it as an excuse to get out of something, I've never been embarrassed to tell someone (male or female) when I'm on my period. But I have maybe had a bit more restraint in sharing these other thoughts I have while menstruating.

The Eagle Has Landed

Not that we usually think to voice it aloud as it is happening, but every woman knows that undeniable feeling when it begins. The first sploosh. The telltale drop. You have approximately three hours before the floodgates open up, so you better move fast.

I can't answer this question for you. Time has not yet granted me that kind of wisdom.

Was This The "Good" Egg?

Every time we're on our periods, we release a different egg; one of the many eggs we were born with. And while I'm in no mood to be creating small humans any time soon, I can't help but wonder: Was that the egg that would have been a world-renowned neurosurgeon and eventually bought me a vacation home in the tropics? Or the egg that had the potential to become a mass-murdering psychopath? Now that I'm menstruating it out, the world will never know.

Playtex Models Are So Fucking Smug

Your entire uterine lining is shredding away from your body. Stop smiling.

Not My Good Underwear!

Another loyal soldier, fallen in vain.

Did The Earth Just Move, Or Was That Just Me And My Ladybits?

Every now and then, your body expels a glob so Earth-shattering that you can't help it when your eyes widen in absolute shock. This is the kind of stuff that should be coming out of Godzilla, not five-foot-something, ordinary human you. You're surprised to find that other people continue to go about their day, as if the impact of your period hasn't just rumbled the ground beneath your feet.

How Socially Acceptable Would It Be For Me To Sit On That?

Railings. Window sills. Small children. When you're on your period, everything becomes "chair" and "not chair." There is no in between.

Oh, Look, A Me-Shaped Hole On The Couch

When you eventually migrate back to your bed at the end of a long Saturday of menstruating, you'll look back and see the cavern you have created between the cushions, and know that no matter what you do or do not accomplish in this lifetime, you have made your mark on the world.

How Much Midol And Alcohol Can I Mix?

Anyone? Science? I'm sure there are answers to this, but there are only so many things I am willing to ask Siri as I lay immobilized by cramps between my sheets, judgmental as she can be.

The Chocolate Will Absorb My Pain

This perhaps-flawed logic also applies to red wine, anything fried or mashed, and cookie butter.

Maybe In My Next Life I'll Be A Butterfly

Everything I Do Or Say Will Become A Cliché

I feel like every woman on their period has to work double time to not seem annoyed by things that are legitimately annoying, out of fear of becoming some caricature of a "Woman Who Has PMS." The other three weeks of the month, I feel somewhat more justified in telling rude people off. But for some reason, I always feel like I have to wait a few beats before I go off on a hater while my uterus is attacking me, regardless of whether or not it's an overreaction. Blergh.

What If My Vagina Eats This Tampon?

One day, foosh. It could just be gone, into the dark and mysterious cave of cramps and blood.