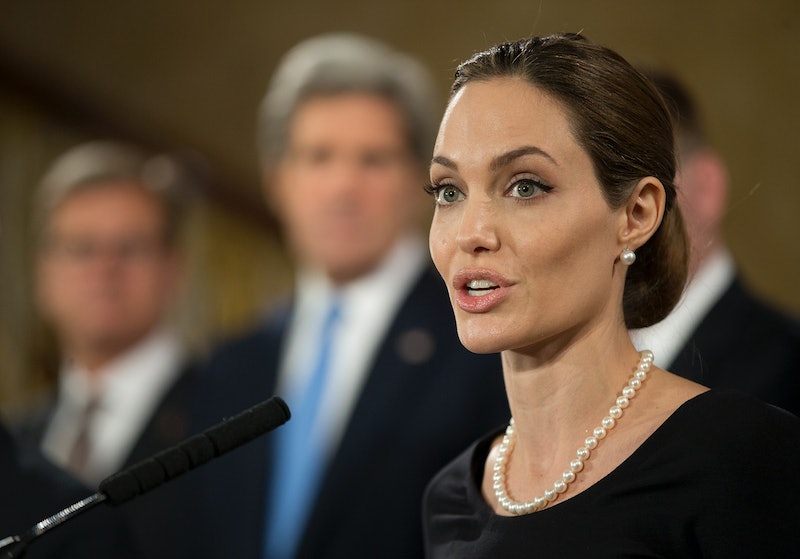 Are you ready to rock... I mean, vote? Nov. 4 is a very special day, as it is the day when everyone should be exercising their right to vote and letting their voice be heard. Not everyone in this world, especially women in some countries, have the right to go to the polls, but we here in America do, and we should celebrate this freedom by voting. To get in the spirit of this red, white, and blue day, let's talk about some of the most politically active actresses in Hollywood today. I'm sure you've seen that Angelina Jolie story going around, where she revealed she is indeed open to running for office. Anyone shocked by this? No, I didn't think so. She does amazing work for environmental and humanitarian projects all over the world. Seriously, Jolie should earn an Oscar for raising awareness about important issues.

And she isn't the only talented actress who's trying to get others involved in important causes and politics. A bunch of leading ladies in the entertainment industry go above and beyond to not only lend a helping hand in the political world, but to encourage others to do the same. Why don't they run for office too?

From Jolie to Kerry Washington to Emma Watson to America Ferrera, so many well-known women aren't afraid to voice their opinion about politics and the issues they believe in wholeheartedly. We should be thanking and honoring them for doing so. To be honest, if they ever ran for office, I'd vote for them. With that said, here are just a few (out of the many) politically active actresses who I'd say yes to at the polls.

Like her character Olivia Pope on Scandal, Kerry Washington is actively involved in politics. She's an active voice when it comes to President Barack Obama. From volunteering during his reelection campaign to encouraging our nation's youth to vote, Washington believes "politics is thinking about you" all the time. Even as a busy actress, she will always make time to educate herself about politics and our nation. I'll leave you with this quote from Washington, "I actually made a promise to myself early on that I would not stop because I was in the public eye, because I feel like it’s my responsibility as an American to be engaged."

Similar to her character on Ugly Betty, America Ferrera stands up for her rights and beliefs, especially when it comes to immigration reform. Just this past March, she opened up about "senseless deportations" and took a stand for all immigrants. Would she run for office? In 2008 she told E! News, "I don't think running for office is anything I'm prepared for or could even prepare myself for." Never say never, but one thing remains certain, she's never too tired to voice her concerns and encourage others to do the same. She's also not one to sit back at home, and likes to be out during campaigns. Ferrera hit the campaign trail for both Hillary Clinton and Obama, and I'm sure she'll continue to participate for years to come.

Spoiler alert: Emma Watson just might be more amazing than her beloved Harry Potter character, Hermione Granger. When she isn't busy filming and becoming even more beloved for her talent, Watson dabbles in politics, especially when it means standing up for gender equality. She turned into a bigger star for her HeForShe Campaign, but her goodness doesn't stop there. This past September, Watson took her role as Goodwill Ambassador for the UN's women agency seriously by delivering a 4,000-signature petition to Uruguay's capital urging for greater participation by women in politics. All hail Emma Watson!

Lastly, we have Eva Longoria. It's no secret she's an avid supporter of Obama and the Democratic party. She likes to be front and center during campaigns, and I like to see her there. Longoria is so involved in politics that she even started her very own Latino political group, the Latino Victory Project, to create more political engagement among Latinos. She believes the future is in our hands and smartly said, "We can’t, as a community, be so engaged in the presidential elections and elect the president, but not turn up at midterms to elect the people who have to work with the president. These numbers clearly are not representative of today’s American landscape, and we want the political landscape to match the identities and reflect the reality of America’s people." Power is knowledge, people.