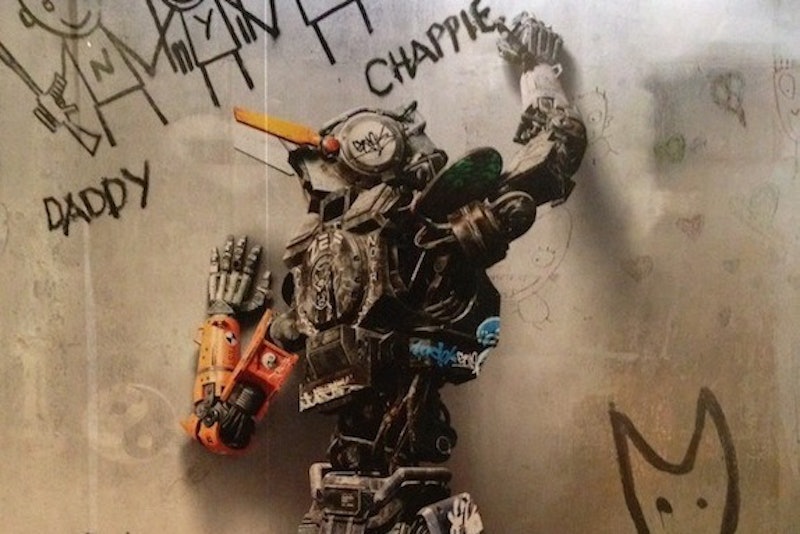 The last time I watched a trailer for a sci-fi thriller and got a little choked up was... well, never. That is until I watched the brand-new trailer for Neill Blompkamp's Chappie. The South African director takes us into a Blade Runner-like reality where a man-made machine was created with the technology to think and feel. Chappie is “born” into the world and must quickly learn to survive and figure out how he fits in with the rest of the human race. Of course, there are plenty who turn their backs on Chappie (including a scruffy Hugh Jackman) because his kind of intelligence is foreign, and so he is “dangerous.”

Along with Jackman, the film stars Dev Patel, Sigourney Weaver, rappers Ninja and Yo-Landi Visser of Die Antwoord (more on them later), and District 9’s Sharlto Copley as the voice of Chappie. By the looks of the trailer, the film is equal parts futuristic thriller and coming-of-age tearjerker. We see Chappie imitate the world around him as a means of understanding — but then what happens when the world turns violent? Will he turn against his family? Can a machine ever feel the same way we feel? This two-minute trailer will raise more philosophical questions than a tweed-wearing college professor can in an hour-long lecture.

It also raises a few burning questions we might actually be able to answer. Let’s take a look:

1. Is this just live-action Wall-E?

Sure, both films are about robots who have attained sentience and are tasked with saving the future of a dystopian human race. However, Chappie was created to think and feel. Wall-E just got there on his own. Though it was equally heartbreaking, I might add.

2. Who in the what what is the ice blonde woman and her freaky friend?

That would be South African rappers Die Antwoord. You just kind of have to see them to believe them.

3. Where have you been all my life Dev Patel?

More of this guy, please.

4. How many motivational speeches will be given to Chappie throughout the film?

I hope many because re-watching Coach Taylor pep up the Panthers is never enough.

5. Why is Hugh Jackman so skeptical?

Was his family killed by robots? Did robots give him that mullet?

Absolutely nothing. At least it appears that Chappie is highly flame- and explosion-proof.