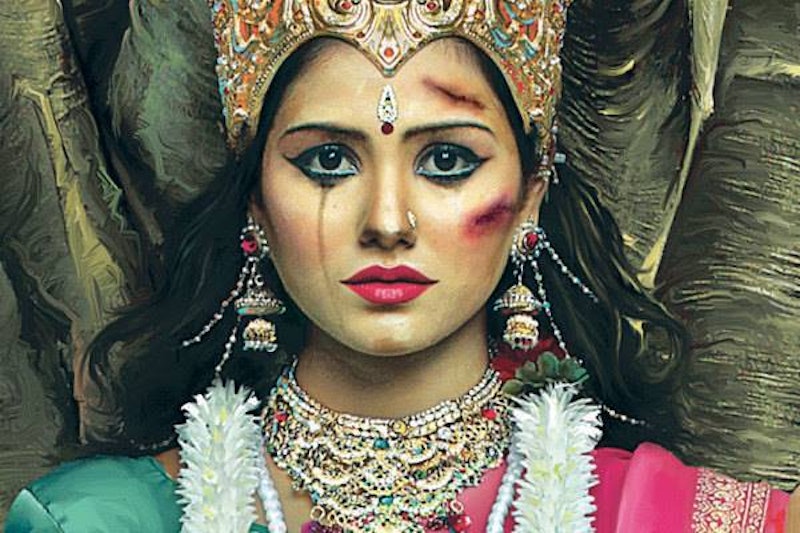 The Save Our Sisters program, an effort to curb domestic violence in India, has just launched a campaign featuring pictures of women posing as Hindu goddesses made up to look as though they have been beaten. The caption on the images reads: “Pray that we never see this day. Today, more than 68% of women in India are victims of domestic violence. Tomorrow, it seems like no woman shall be spared. Not even the ones we pray to.”

It’s a pretty powerful message, and one that is desperately needed in the subcontinent. India did not pass a comprehensive law to protect women against domestic violence until 2006, which is not as bad as Saudi Arabia, which just passed its first law criminalizing domestic violence, sure, but is still eye-opening. Despite the effort of many, however, violence against women remains disturbingly high in India. In fact, the country was recently rated the fourth most dangerous in the world for women.

The problem, of course, goes deeper than laws or policy. Entrenched cultural attitudes make it difficult to enact real change. For instance, 53 percent of adolescent girls and 57 percent of adolescent boys in India think that wife-beating is justified. The problem of domestic violence is even common among upper and middle class women. It’s considered “normal,” and is therefore difficult to fight.

The shock value of the images will hopefully jolt some into reconsidering their preconceptions. While it might be common to see women on the street with bruises on their bodies, seeing goddesses will hopefully give many pause, forcing people to pay attention to an issue all too often swept under the rug.

After all, in order to get people to care about a problem, you must first convince them that it is a problem. With any luck, this campaign will help to do that.

For more information about the Save Our Sisters Campaign, you can visit their website.

More like this
Ben & Jerry’s & Tony’s Chocolonely Are Launching 4 Responsible New Flavours
By Sophie McEvoy
August 2022 New Moon Do’s & Don’ts
By Brittany Beringer
Your Daily Horoscope For August 18, 2022
By Alexandria Lettman
How To Turn WhatsApp Read Receipts Off
By Emma Carey
Get Even More From Bustle — Sign Up For The Newsletter