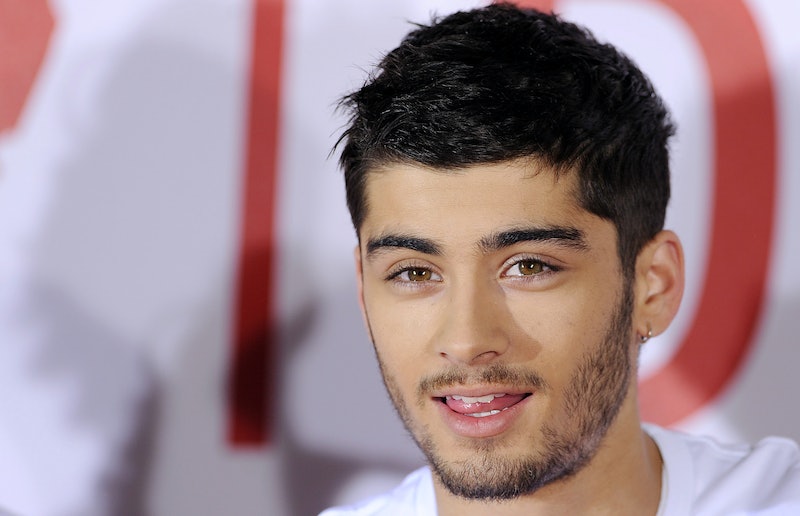 If you're a One Direction fan, you know that 1D member Zayn Malik and Little Mix singer Perrie Edwards are engaged. And if you aren't a One Direction fan, what are you doing reading articles about One Direction, hmmm?! (For what it's worth, valid answers include: Internet addiction, obsession with wedding dresses, being on the hunt for an engagement ring, and "I thought I was reading about U.S. foreign policy.") The two young pop stars have been engaged since August 2013, so you may be wondering when Zayn Malik and Perrie Edwards are getting married. Unfortunately, if you're looking forward to photos of the couple walking down the aisle (or looking for wedding dress inspiration), it sounds like you'll have to wait a while.

During a recent interview with BBC Breakfast, Zayn said, "We haven't really thought about the wedding side of things yet, or how we're going to do it ... We're just kind of engaged, we just haven't had time to organize things like that." He added, when asked if one of his bandmates would be his best man, "I think it would be quite hard to pick one." Yeah... they aren't prepared. Also, *cough*pick Harry, duh*cough*

I think this is awesome. These two are taking their time and not unnecessarily rushing into anything. Who says you shouldn't enjoy being engaged, right? It doesn't have to be all wedding magazines this and getting overly stressed out to the point where you're tempted to call of the wedding off that.

Plus, Zayn and Perrie have fallen victim to marriage rumors before. In October #zaynandperriearemarried started trending on Twitter and many fans thought the couple tied the knot in secret. I imagine having this amount of obsession over your nuptials really must make you want to take it easy.

As for when the wedding will be — other than Zayn's recent statement that makes the answer seem to be "a long ass time from now" — there have been other hints in the past. Zayn's mother, Tricia Malik, once said, "They’re thinking of the end of next year, although no date has yet been set yet." She said this in 2013, and those plans were seemingly squashed when in May, Perrie told Metro of possibly postponing their wedding plans due to their busy schedules, "I’m guessing so, yes... But after that, once it starts dying down a little bit touring-wise, we’ll be able to get into it."

Also in May, Perrie told The Mirror that she had her wedding dress figured out, saying, "I definitely want long sleeves. I know exactly what I want, so I’m designing it and getting it made from scratch." Perhaps that's all they have ready. A lot goes into a wedding: invitations, Mason jars... other stuff. I'm no expert, I'm just saying it would take some planning and if Zayn is saying they haven't done that and Perrie's saying they're too busy, I wouldn't hold your breath for a wedding anytime soon.