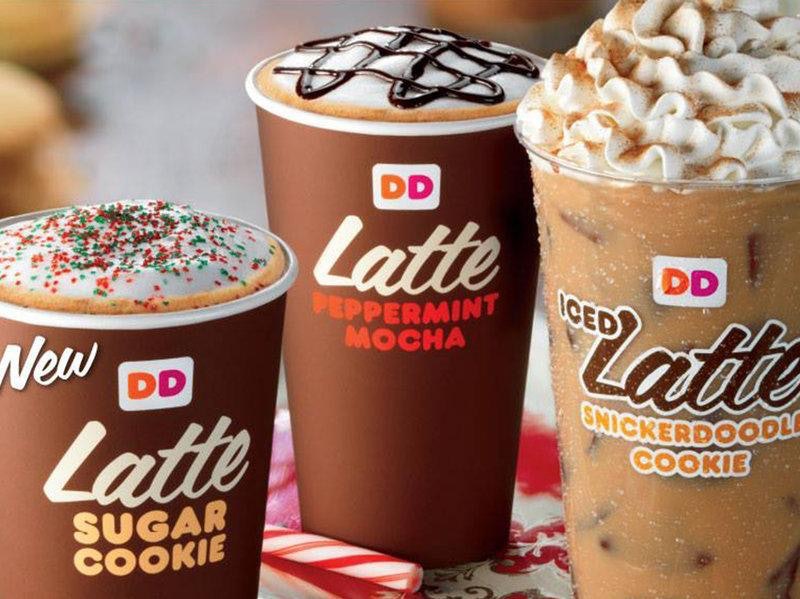 According to PR Newswire, Dunkin unveiled two new beverages this week: The Sugar Cookie Latte and the Snickerdoodle Cookie Latte. Both of them are intended to taste like drinkable, coffee-infused versions of their namesakes; the sugar cookie option comes topped with “festive red and green sugar,” while the snickerdoodle one gets a kick from a dash of cinnamon. To be honest, I’m not really sure what a “sugar cookie” really is as a flavor; that particular variety of cookie always struck me as a vehicle for whatever else you wanted to pile on top of it — frosting, sprinkles, and so on — so I’m having a hard time boiling it down to a latte flavor. I imagine the Snickerdoodle Latte closely resembles the Starbucks Cinnamon Dolce Latte, though, so do with that what you will.

The Independent writes that Dunkin’ hopes to replicate last year’s success with the cookie-flavored drinks: 2013's Red Velvet Latte and Salted Caramel Hot Chocolate apparently boosted revenue for the chain by 27 percent in the fourth quarter. Additionally, John Costello, president of global marketing and innovation for Dunkin’ Brands Group Inc., told Bloomberg in an interview, “Our guests love tradition along with new. I would describe our holiday strategy as familiar with a twist.”

I’m not sure whether the two cookie lattes were developed specifically to give the new Starbucks drink, the Chestnut Praline Latte, a run for its money — but that’s probably the effect it will ultimately have. All the same, though, I feel a little bit like all of these new holiday beverages aren’t just “familiar with a twist”; they’re scraping the barrel of possible flavor ideas. I mean, we’ve already covered gingerbread, peppermint chocolate, eggnog, salted caramel, and (of course) pumpkin spice; “snickerdoodle” is really just pumpkin spice by another name; and most of us probably have no idea what a chestnut actually tastes like. What other options are left? Here are a few thoughts — although a lot of them would probably still be retreading old ground:

AKA hot chocolate — just with a fancy French name.

Yet another name for pumpkin spice, although the addition of some cardamom might set it apart a little bit.

This one might actually be sort of unique — I don’t think Dunkin’ or Starbucks has an almond latte on the menu, so maybe there’s room for a marzipan-flavored one. It would probably pose some allergy issues, though, so do with that what you will.

Like the Buch de Noel Hot Chocolate, this would actually just be a regular ol’ mocha; equating it with mousse, however, would give it some added cache.

Starbucks gave this one a shot once before, but I don’t think it ever came to fruition. Maybe now would be a good time to try again?

Otherwise known as hazelnut hot chocolate. I’m not actually sure what you could do to a hot chocolate to make it crepe-like, but I’m sure someone can figure it out.

I don’t know what, though; cranberry and coffee don’t generally seem like flavors that go together. Thoughts, anyone?