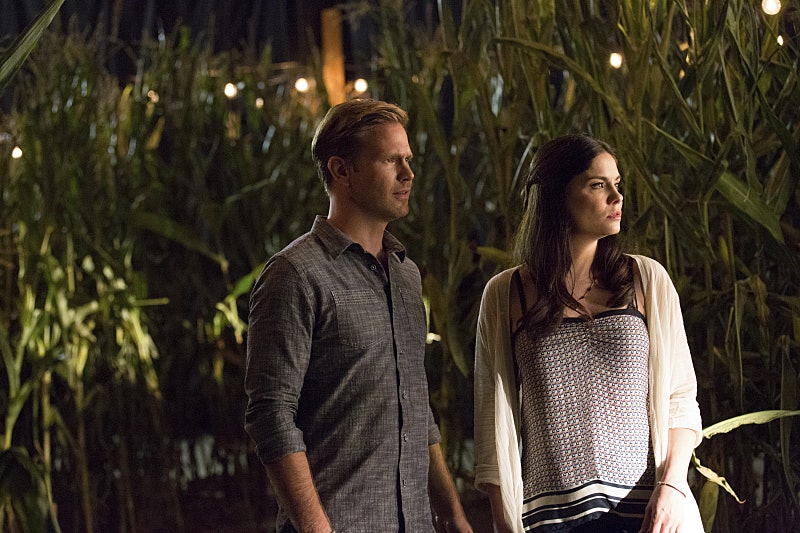 Alright, TVD fans, Season 6 has finally upped the ante. No, I'm not talking about Damon returning to Mystic Falls on The Vampire Diaries last Thursday. I'm talking about Alaric failing to compel his new love interest, Jo, and her not caring about his attempt AT ALL. I officially understand why TVD brought Alaric back, now that it's introduced a brand new mystery for us all to wonder about. So, what exactly is Jo's deal? TVD Season 6 established that she's working at the Whitmore College hospital and that she and Alaric are going to have a little fling. But could the fact that Alaric couldn't compel her and she was still into him after that awkward moment mean that she's targeting the Enhanced Original vampire? There's definitely more here than what meets the eye with The Vampire Diaries' new doctor.

There are some simple explanations for Thursday night's phenomenon — the simplest being that Jo is on vervain. It's starting to seem like everyone in and around Mystic Falls on TVD is fully aware of the supernatural around them and so they've all started taking vervain. OR, if they're blissfully unaware of the supernatural, they're probably taking vervain anyway thanks to someone they know who is aware. Basically, what I'm trying to say is, it's entirely possible that Jo isn't a sinister character at all and just someone who's aware of the world — the blissful ignorance possibility went out the window with the fact that she definitely knows what compulsion is.

But, would TVD go down that road? It just seems to simple, way too easy, and like it's an absurdly unnecessary hurdle for Alaric to jump when there are so many other things going on — like his BFF, Damon, returning from the dead. Julie Plec does nothing without a motive, if we've learned nothing from TVD's five, long seasons, we've at least learned that much. Jodi Lyn O'Keefe opened up to TVLine on Oct. 30 about her new role and revealed that Jo joined TVD for a reason and that we'll get to know her tragic past soon enough. Has her life been touched by vampires and that's where her strange reaction came from? It's entirely possible and we'll find out soon enough when Jo reveals her past to Alaric on Thursday's new episode, "The More You Ignore Me, the Closer I Get."

So, what is Jo hiding? I don't want to sound like a crazy conspiracy theorist, but doctors at Whitmore College seem to have a tendency to double as Augustine scientists and professional vampire torturers. Frankly, Jo played Alaric's attempt at compelling her WAY too cool to convince me that she's not up to something in Season 6. But what exactly is it?

We need to look at the facts here — the most significant being that Alaric is unique. Enhanced Original vampires aren't running around all over the place. In fact, Alaric might be the only one currently living in the Mystic Falls/Whitmore College area (the Mikaelsons don't technically count because they're just "Original" not "Enchanced"). I know what you're thinking — unless Jo is seriously connected to the supernatural world, there's no possible way she knows about Esther's spell and the plot she involved Alaric in that turned him into the creature he is today — but humor me here. Augustine knew a lot about things that not even Stefan Salvatore was aware of and if Jo is a member, it's entirely possible that somehow, some way, she learned about Alaric's specific nature.

There's also something else we need to consider — Jo saw Alaric heal from being impaled in the stomach (possibly fatally) to perfectly normal. I'm assuming that, because she's a doctor, Jo is also a smart woman that knows that people can't just miraculously heal like that. And she played it totally cool in this situation as well — I'm not sure if it was because they were surrounded by people that needed help and her doctor side had take over, but she asked zero questions about Alaric's healing phenomenon. Which is essentially another conspiracy strike against her in my book.

Her totally cool reaction last Thursday to both Alaric's failed compulsion attempt and his quick healing is either an indication that she was totally aware of what Alaric is or that her scientific side took over and she was more intrigued than terrified and annoyed that he tried to change her memories of the night they'd had. At this point, it's a toss-up depending on how informed Jo is about the vampire community, but I'm willing to bet that she's more involved than TVD's let on.

It's one thing to be curious about medical marvels, but it's an entirely other thing to walk away from an obvious attempt at compulsion without so much as a "you're a total creep, WTF." And with Jo's "tragic past" coming to light in Thursday's episode, I'm sure it'll prove to be an explanation for why she's so chill about Alaric's obvious vampirism and at the very least, clue TVD fans in as to whether or not Jo is a bad guy or just another woman Alaric's won over with his dark charm.

More like this
David Tennant’s Transformation In ITV’s 'Litvinenko' Is Astonishing
By Sophie McEvoy
Theo James Revealed The Truth About His 'White Lotus' Nude Scene & Fans Can't Cope
By Stephanie Topacio Long
The ‘White Lotus’ Cowboy Theory May Spell Danger For Tanya
By Grace Wehniainen
The 'Kenan & Kel' Reunion On 'SNL' Took A Dramatic Turn, Thanks To Keke Palmer
By Brad Witter
Get Even More From Bustle — Sign Up For The Newsletter