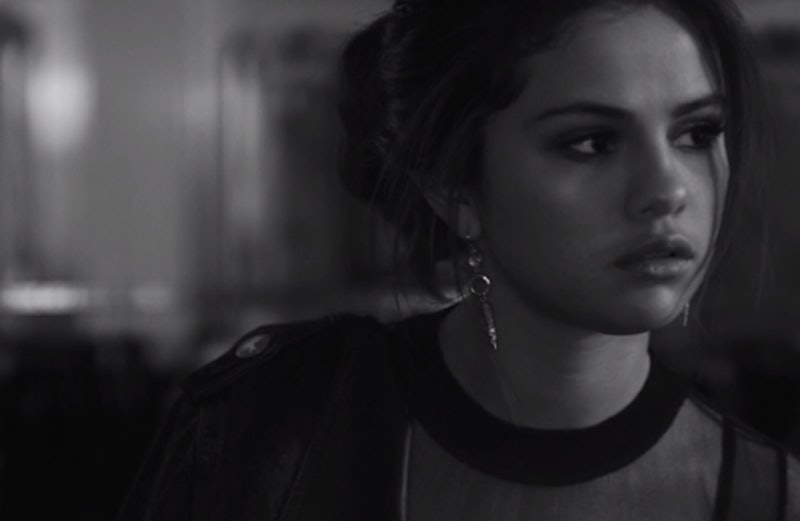 Are you feeling weepy right now too? You probably shouldn’t have started this morning watching Selena Gomez’s new music video "The Heart Wants What It Wants," but as a fan of the actress and singer myself, I understand that you probably couldn’t help yourself. The general message of the song is as clear as the age-old adage Gomez sings, "the heart wants what it wants," and we all obviously know that the Spring Breaker is talking about her contentious off-again and on-again relationship with Justin Bieber. I'm part of the critical public who just wants Gomez to move on, but, of course, I get that it is her relationship and that she knows the punk pop star better than any of us ever will. I’m just saying that he doesn’t seem like good news.

I also know that there were previous rumors that Selly’s best friend Taylor Swift didn’t like Gomez and Bieber's relationship too much either, and that it is said to have caused tension between them. So, when I first heard the "The Heart Wants What It Wants," while I knew it probably had to do with Bieber, I suspected that the song might be about Taylor Swift, as she relates to the Bieber situation, too.

I mean, who could forget that time T. Swizzle stuck her tongue out backstage at the Billboard Music Awards when she saw Gomez hug her then-ex and kiss him on the cheek?

Nowadays, Swift and Gomez are going strong. Just last month, Gomez was talking about how Swift wanted to kidnap her — out of love! — and take her to New York to live. The "Come & Get It" singer also said that the 1989 artist imparted some great advice to her recently, saying, "If you’re the smartest person in the room, I think you’re going to be in the wrong room." Which, yes, applause. So I know they're good now, but remember when Gomez seemed to drop everyone on Instagram — Swift and Bieber included — or the time the actress didn't spend her 22nd birthday with Swift? That was disappointing because as Swift has shown us, she knows how to rock being 22.

So the close buds are still friends, but they don't seem to be seen together as much, which does make me sad. I think they've gotten past Swift having strong reservations against Gomez's chosen beau, but I do think that it used to be an issue. As I see it, those feelings obviously inspired Gomez's "The Heart Wants What It Wants," because even though the public might cry out against her relationship, a friend's opinion hurts more. We've all been there when a friend didn't agree with a relationship before.

Just think about how it opens. It's a voiceover monologue from a sad Gomez. To me it sounds like a voicemail (possibly to Swift?): "You make me feel crazy. You make me feel like it was my fault. I was in pain." Sounds like whoever she was talking to wasn't helping her out with how she was handling her relationship issues with Bieber.

Granted, the message could be to an S.O. too — as I think the rest of the song is — but it seems unlikely because then how would she get the clip? Maybe Bieber would share it, but I'm not so sure.

Now, think about how Swift encourages all of us to emote out in song. Gomez is totally taking a page out of her book, and she'd have to get the voicemail from the person she left it for, which could be Swift. Gomez's references to Swift in recent interviews makes me think that they're seeing each other more often now, rekindling their friendship, or maybe even collaborating

They are releasing new music around the same time, and Gomez might've gotten some Swiftian advice on the track. Swift took a risk with the synth-pop, and I think that the monologue at the beginning of Gomez's song is just as big of a leap. It's very honest and it would take a very secure person to share it.

The overall message might be about the feelings Gomez had when standing up to a friend about her relationship, but I also get the sense that Gomez is realizing she had to go through this relationship and all of its tumultuousness to get where is.

We get the same message from Swift's song "This Love" from her new album. I know everyone thinks it's about Harry Styles — as everyone thinks all of the songs on the album are about Harry Styles — but I think it's about Gomez having to learn lessons for herself. The song is about letting a person move out of love, then having that person come back to her. The lyrics tell me that it doesn't necessarily have to be a romantic relationship:

I watched you leaveYour smile my ghostI fell to my kneesAnd you're young, just to runCome back to what you need

Swift is about two years older than Gomez. She's had more experience dating different guys, so I can see her wanting to protect Gomez from relationship snafus, but also knowing that her friend has to learn whatever lessons she might on her own.

I also think that the song nods to how they met:

Clear blue waterHigh tides came and brought you inAnd I could go on and on, on and on

The two met when each of them were dating Jonas Brothers — that seems like such a long time ago — and they helped each other through their respective Jo Bro break-ups, because let's not forget that Joe Jonas broke Swift's heart via cell phone. That first heart break is the worst but Gomez helped Swift through it and vis versa.

The refrain talks about the relationship's ups and downs as any good friendship can make it through all of it.

They obviously will have the moments when they won't be as close or even seem like friends, but they still love each other. And for now, Swift and Gomez seem to be back on stronger footing.

What do you think? Give the beginning of Gomez's "The Heart Wants What It Wants" a listen below.