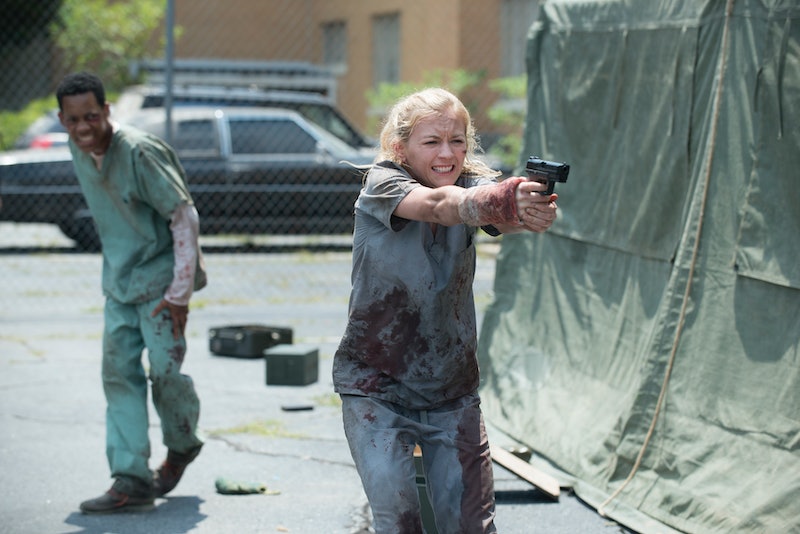 We finally got our answer to where Beth is on The Walking Dead in the episode "Slabtown," and of course, it wasn't good news. She is being held captive in a hospital (as expected). At the end of the episode, Carol was also brought in on a stretcher, so can Carol and Beth escape the prison that is Grady Memorial Hospital together? Beth made a valiant effort to escape earlier in the episode, but was ultimately recaptured. Although it's bad for Carol that she's (allegedly) injured, her arrival is definitely a spark of hope for Beth. Escaping from the hospital by herself would be impossible, especially after assisting with the death of Gorman. Now that Carol is there to join forces with her, and now that Noah may have met up with Daryl, there's a real chance the two can get out of there. (Fun fact: there is an actual Grady Health System in Atlanta, Ga. — I am sure they are loving this publicity.)

Just because I think they will escape doesn't mean I think that both of them will necessarily survive. Carol and Beth have each had their time away from the main group on the show, so if the crew was reunited in an effort to save them, it would be even more heartrending to have one of them die. Either woman dying would be heartbreaking with Daryl and Beth's death in particular would hit Maggie hard. (Although I don't know if Maggie would be involved in their escape, which would make it even sadder if Beth died.)

Carol has been feeing alienated from the group, as she showed by trying to escape the church during the night unseen in "Strangers." She has been an apocalypse all-star and though that can sometimes be the signal of a character's swan song, I would hate to see Carol go. Even injured, she will not let herself die in that hospital. And perhaps if the rest of the group comes to save her, she'll realize she really is part of the group regardless of the tough actions she has had to do.

Now, there is an interesting theory that Carol could be faking her injuries in order to save Beth. So if we assume Daryl is with Noah (I mean, that would be the best thing right now, right?), and Carol and Daryl were together at one point, then they would know where Beth is. I really do hope that Noah is with Daryl, but I'm not confident that Carol wasn't legitimately taken.

Of course, Carol is no stranger to covert missions (she just did one to save everyone from Terminus), but would Daryl have left Beth (or Carol) if he knew where Beth was? I'd be surprised that he didn't attack the hospital on his own if he was anywhere near it. I can't imagine he'd let Carol go ahead without him and then go all the way back to the church. Then again, their chances of infiltrating the hospital do go up exponentially when they have Rick and Michonne in tow. And perhaps Rick, Michonne, and Daryl will use Noah to get to Dawn.

That's not to say the two women couldn't escape from Grady Memorial Hospital on their own. They have both proven to be badasses. It's more that if Carol is actually hurt, she will be weak. And since Beth has already tried to escape, Dawn is going to keep her on serious lockdown. However, I could see Beth's coward friend Dr. Edwards possibly helping her in one last brave act against Dawn (a lá Milton from Woodbury who was under The Governor's thumb).

As for getting theories from the comics, Beth doesn't exist (not as Hershel's daughter at least) and Carol's comic counterpart's fate is much different than our tough-as-nails TV Carol, so that's no help. The Spoiling Dead Fans posted to their Facebook page a major spoiler for the mid-season finale of The Walking Dead (seriously, I warn you not to click if you like surprises) that does concern the fates of Beth and Carol. I don't want to believe their information, but I do know we won't be seeing what happens to these two for a couple of episodes. I've got my fingers crossed they're using that time to coming up with a plan.