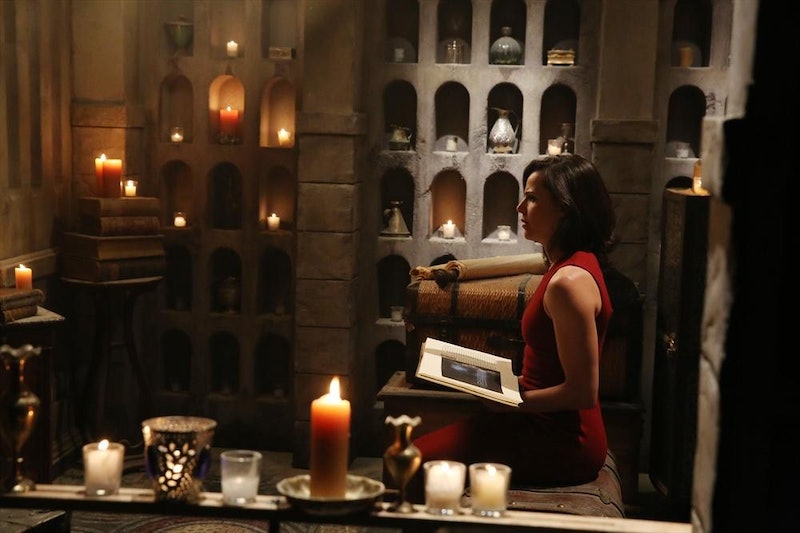 When Tinker Bell first led Regina to Robin Hood on Once Upon a Time, she chose revenge over hope. Tink called it selfish, because Regina essentially ruined Robin’s life in the process. Then in Season 3, Regina told Tink she really refused to meet Robin in the pub all those years ago because she was afraid happiness would make her weak. I only wish she had realized then that true love is actually what made her even stronger. Of course, if that were the case, there would be a serious lack of drama to create such a successful TV series with, so I accept Regina’s fear of happiness. I’d say you can’t change the past, but evidently on this show you can — so for now I’ll say that even if Robin and Regina don’t end up together, their relationship has changed her for the better.

When Season 3 ended with Marian’s return from the dead, Regina blamed Emma much in the same way she did Snow White for the death of her first love, Daniel, back in the day. Regina had been showing so much progress that it disheartened fans to think she might turn back to the dark side. But actually, the opposite happened — the loss did in fact weaken her at first.

If you recall, when Robin ended things with her initially, Regina only wanted to see Henry and then even cut him out. All of a sudden she had enemies again, refused any human interaction, and lost her progress to the point of summoning Sidney Glass to rid the world of Marian. But Robin aside, love eventually brought her back to consciousness. Henry refused to let Regina lock him out of her life after the debacle that was Neverland, and with his help she re-motivated herself and decided a happy ending is what she deserves.

Before Robin, Regina would have done whatever it took to make herself happy, but she's finally reached a point where she legitimately cares about other people's safety. She may have given up her position as mayor during her low point, but she came out of hiding to help defeat the Snow Queen, despite her hatred towards her soulmate's wife. In fact, she saved Marian's life just for the sake of keeping Robin happy, and is devoting the majority of her time to do it again.

It was incredibly big of Regina (and so unlike her) to admit that Robin has to fall back in love with his wife in order to rescue Marian. Problem is, this confession probably only made him fall deeper in love with Regina. Robin believes in second chances because he wasn't always the greatest guy himself, and so he understands how hard it was for Regina to change. He knows the real her, loves the real her, and doesn't appear to want to lose her any time soon.

Regina agreed to commit herself to saving Marian even before Robin admitted his feelings toward her, which proved she's finally capable of committing a completely selfless act. Sure, she loves Henry and would do anything for him as well — but since he was once the only thing that made her happy, her actions regarding Henry are at least partially selfish. With Robin, she found a different kind of love. His love changed her in a way that made her believe in herself again, allowed her open her heart to people like Emma and even occasionally Mary Margaret, and encouraged her to find happiness.

We don't know yet what Regina is planning to do with the storybook or whether it involves Robin. All I know, or at least whole-heartedly believe, is that Regina will never again be the villain of OUAT. She knows what it's like to feel true happiness — for however short she felt it — and she'll find it again. Meanwhile, the 'shipper in me selfishly wants it to be with Robin, so until that happens I'll be spending my Sunday nights like this.