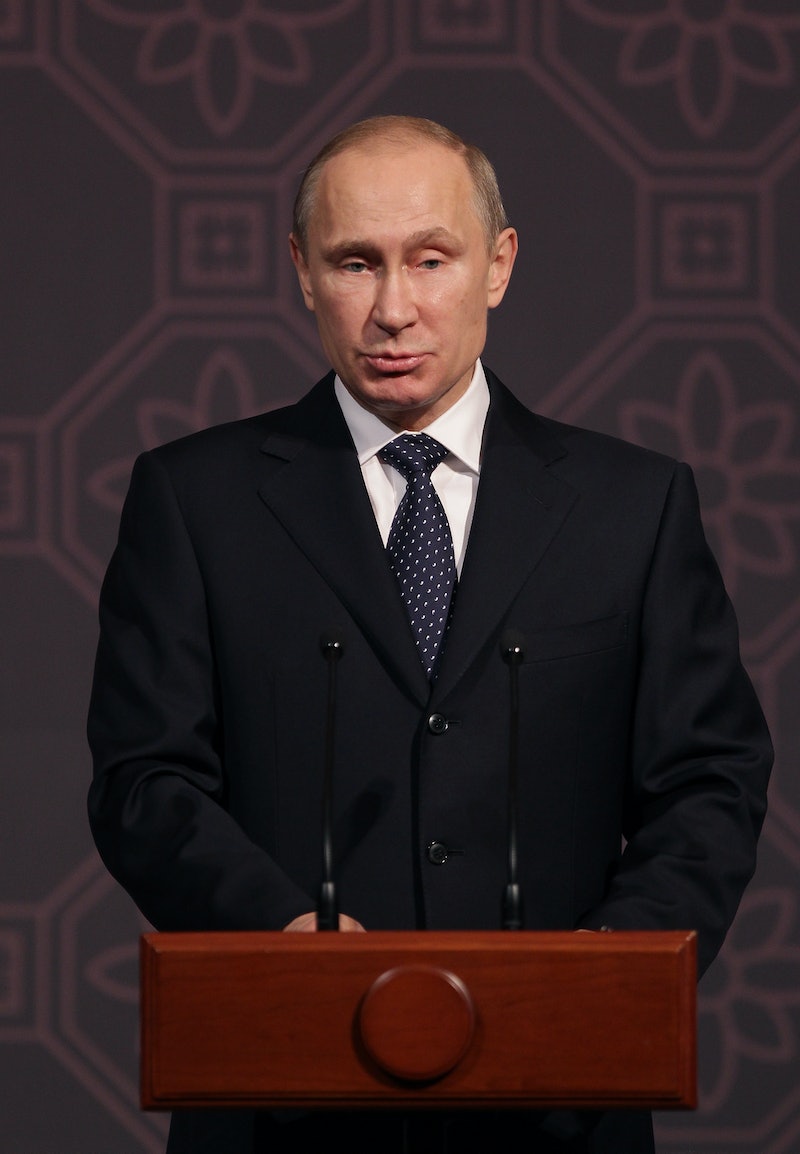 What woman wouldn't want to be pregnant with the child of Vladimir Putin? That seems to be the assumption of one Russian lawmakers who has proposed a plan to ship Putin's sperm to every Russian woman so that she can have a mini-Putin of her very own. Every woman's dream, right?

The lawmaker behind this, the Chairwoman of Parliamentary Commission on Women’s Affairs, Children and Family, Yelena Borisovna Mizoulina, also wants to establish special institutions to raise the offspring that result, eventually sending them to special schools and grooming them to be the future of Russia. “Children born from the Russian president in the future will form the military and political elite of the state,” she said.

Aside from the fact that this plan is utterly bizarre, it also carries a lot of practical concerns. For one thing, Russia is a country of approximately 140 million people. Granted, a relatively small percentage of the population are women of child-bearing age, but that's still a lot of sperm for the president to provide. It's also a lot of potential children for the state to raise. Plus, who's going to ensure that every woman who uses Putin's sperm actually gives up her child. Can you even require such a thing? Even for Russia, that seems like a pretty egregious human rights violation.

Plus, if suddenly there are millions of people in Russia all with the same father, isn't that going to cause some potentially incestuous problems down the road? If not this generation then probably the next.

To say nothing of the fact that the idea of lots of baby Putins running around Russia is kind of terrifying.

IS THAT NOT TERRIFYING???

Fortunately, the idea seems so crazy I can't imagine the program will ever actually be implemented.

Which just leads me to wonder who these people are who want to have Rob Ford's babies and how do I ensure they stay far away from me?

Still, all of this does raise interesting questions about the possible future of artificial insemination. As such practices become easier and more widespread, will we one day see the day where world leaders and celebrities can distribute and produce hundreds or thousands or even theoretically millions of offspring? Will we one day live in a world where Genghis Khan isn't the only person 1 in 200 humans can claim as an ancestor?

Only time will tell. For now, I simply wish to escape the potential plague of baby Putins and mini Rob Fords that some seem so eager to unleash. And if those two armies ever joined forces? There would be no hope for mankind.

More like this
How To Fight For Reproductive Rights, Based On How Much Time You Have
By Courtney Young
Boris Johnson’s Leadership Is In Question – Again
By Bustle UK
The Families Of Grenfell Tower Are Still Waiting For Justice, Five Years On
By Bustle UK
Juneteenth Is Now A Federal Holiday — Here's What That Means
By Lani Seelinger and Syeda Khaula Saad
Get Even More From Bustle — Sign Up For The Newsletter