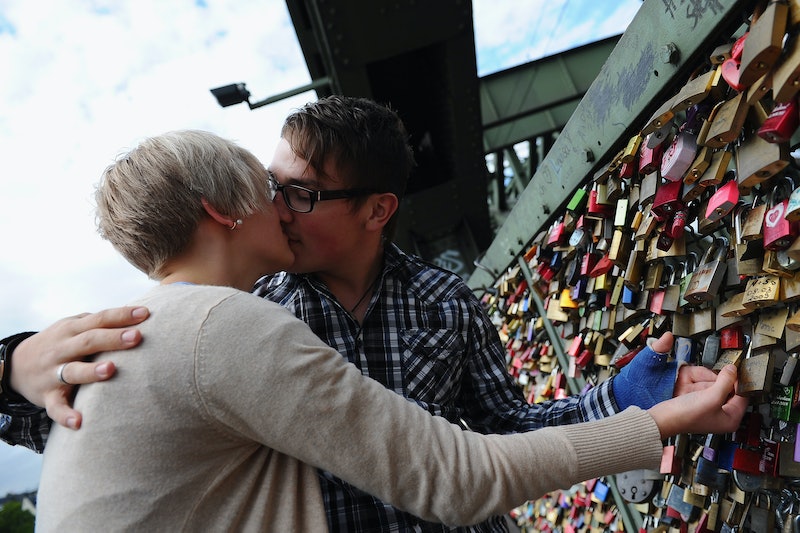 Rarely do most of us take the time to simply thank our partner for being awesome. Think about it: For all the grief you sometimes give your significant other, all the silly arguments over the dumbest things in the world, all the nit picky digs about the way they squeeze toothpaste — how often do you just tell them why they're the best? If you're anything like me, not nearly often enough.

It's amazing how even the smallest tokens of love and appreciation can not only make your partner feel great, but also make your relationship even stronger. It's the surprise factor of that random act of kindness that makes your partner realize that they really are appreciated — and that when it comes to dating you, romance isn't dead.

As it turns out, November 13 is World Kindness Day, so there’s always no time like the present to be randomly kind to those you love. Since you should make a whole week of doing kind things this week, why don’t you start with your significant other?

Need some ideas? Here are 21 of the kindest, random-est everyday things you can do for your partner. Because you know they deserve it.

WRITE THEM A LOVE LETTER AND LEAVE IT SOMEWHERE UNEXPECTED

Whether you attach it to the orange juice bottle or slip it in their wallet, find a place that will really surprise them.

SEND THEM Out WHILE YOU surprise CLEAN THE APARTMENT

It may not be your turn, but that's the best part. Give them a list of fun things to do instead, while you scrub that apartment spotless.

DRAW THEM A PICTURE

Even if it's a stick figure drawing that shows that art isn't your strong suit, it's the thought that counts.

SIGN THEM UP FOR A CLASS THEY'VE BEEN EYEING

You know they've been wanting to take that pottery class, so sign them up for it. Maybe you're just the push they need.

gchat THEM A HAIKU

With only three lines and 17 syllables in the whole thing, anyone can write a haiku — and the results are both funny and romantic.

RUN AN ERRAND THEY'VE BEEN PUTTING OFF FOR THEM

At some point, the laundromat is going to sell their stuff if someone doesn't pick it up soon.

Nightstands were made for books — and random acts of romance.

GET THEM A MAGAZINE SUBSCRIPTION YOU KNOW THEY'D LOVE

Sure, they've probably been reading most of it online, but there's nothing quite like lounging on Sunday with a new magazine. Every time they open it, they'll think of you.

DONATE TO A CAUSE IN THEIR NAME

I once did Adopt-A-Mantee for a guy I was dating in college. He said it was the coolest gift he ever got.

RANDOMLY TEXT THEM A COMPLIMENT

Tell them why you love them.

AND/OR SEXT THEM unexpectedly

Your partner really good at oral? Tell them how good.

PLAN AN AFTERNOON FILLED WITH THEIR FAVORITE THINGS

Everyone wants to be Queen or King for the day. Make it happen for them.

BE THEIR SURPRISE LUNCH DATE

Show up to their office and tell them lunch is on you.

You can use Spotify for this or just send them a zip drive.

PUT A LOVE LOCK ON THE CLOSEST BRIDGE

All you have to do is pick up a padlock, put something on it that’s meaningful to you two, and lock it on a bridge. Don't forget to throw your keys in the water.

AGREE TO LET THEM PICK THE MOVIE THAT NIGHT

I have no desire to see Interstellar, but I’m going to go tonight and grin and bear it for my partner.

PUT TOGETHER A SCRAPBOOK OF YOUR RELATIONSHIP

There’s a reason you’ve been saving random tokens from your adventures together, so put them all in a scrapbook for them.

Whether you’re in a relationship with a woman or a man doesn’t matter. Everyone loves flowers. It’s just a fact.

ask about THE DETAILS OF THEIR DAY, FROM BEGINNING TO END

You already know it’s going to involve some person on the train smelling and their boss being a jerk again, but just do it. People need to vent after work.

TELL THEM THEY’RE HOT (WHEN THEY AREN'T EVEN TRYING)

THANK THEM JUST FOR BEING WHO THEY ARE

Thanks for being you.

More like this
Bobby Berk Explains How To Maximize Every Inch Of Your Bedroom Storage
By Marilyn La Jeunesse
10 Ways To Be More Empathetic To Your Partner
By Raven Ishak and Lexi Inks
Think Your Partner Is Cheating? These Tarot Cards May Confirm Your Suspicions
By Kristine Fellizar
The 19 Best Tweets & Memes About Bisexual Awareness Week
By Lexi Inks
Get Even More From Bustle — Sign Up For The Newsletter