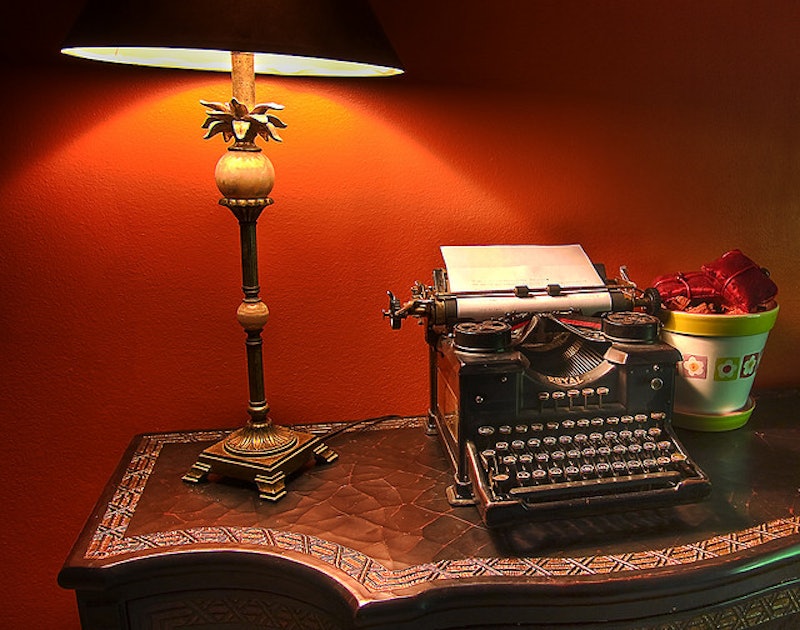 I was sitting at my New Age, boomerang-shaped desk, instant messaging with a coworker when I decided I would pursue an MFA in creative writing. Looking back, I see myself clad in a brown cardigan, aflutter with ambition. I wanted to be a real writer, and the MFA sounded glorious: two years sequestered from the world and writing fiction! However, I also had a pretty good job as a copywriter for dentists, and though I’d threatened to throw myself into a bull fight if I ever had to write about dental implants again, I wasn’t terribly interested in joining the expanding circle of hell that is adjunct teaching, either.

I ended up attending the MFA in Creative Writing at the University of Arizona. My experience was equal parts exhilarating literary milieu and hot mess of egomania, and though I acquired a few more debts, gray hairs, and social neuroses in the process, I came away with renewed confidence in my writing.

Having had that experience, I only wish I would’ve known back then what I know now. If the goal of the MFA is — as an article in The Rumpus called Why MFA? claims — to prioritize writing and gain literary insights from a supportive community, then there are far less costly and less traumatic alternatives. For those who live in or near the cities below, the following nonprofit writing centers can provide a non-traditional path to becoming the next J.K. Rowling or Stephen King (both of whom didn’t go the MFA route, by the way).

What: Founded in 1960, The Poetry Center houses one of the largest poetry collections in the U.S. Although they do sponsor some MFA and university events, their primary goal is to provide the public with access to a diverse literary culture.

Who: Poet and former managing editor of The Kenyon Review, Tyler Meier serves as executive director and is supported by an impressive staff of fellow poets.

Workshops: From “Surrealist Writing” to “Listening to Sound Poetry” to “Mixed Media Artist’s Book,” the varied workshops here provide insights on topics, genres, and authors not typically covered in the MFA.

Also Nearby: Casa Libre en la Solana — an event space and residence for writers, this nonprofit provides a fiercely supportive community for writers with diverse projects and backgrounds.

Who: Founded by Iowa Writer’s Workshop alum Edan Lepucki and co-directed by Chris Daley, this writing center has more than 16 writers/educators at your disposal.

Workshops: Nomad workshops, such as “How to Give a Reading Without Boring Your Audience to Tears” and “Worldbuilding Across Genres,” take place in local bookstores and writers’ homes. Plus, since wine and cheese are often served, you’ll be much more relaxed than in the typical, high-stress MFA classroom.

Also nearby: Both the Writing Pad and L.A. Writer’s Group offer crash courses in writing for television, whereas the L.A. Writer’s Lab supplies techniques (online and in-person) for completing a novel in just 90 days.

What: The Grotto began as a six-room workspace in 1994 and has since expanded to fill the entire floor of an office building, offering common-area workspaces, memberships, and classes to public artists of all kinds.

Who: Bestselling author Po Bronson and co-founders Ethan Watters and Ethan Canin are joined by more than 80 accredited authors, including heavy hitters like Stephen Elliot and Matthew Zapruder.

Workshops: Four-week sessions like “Life Into Literature” and “Blogging for Beginners” target professional writers interested in making careers outside the bounds of academia.

Also nearby: For an intimate space to learn and to write, visit The Writing Salon or Laguna Writers, which offers themed retreats at a secluded cabin nearby. Kids age 6-18 can attend Dave Eggers’ nonprofit 826 National for free project-based programs, as well as buy mermaid bait in the ever-popular pirate supply storefront.

What: Since 1997, this nonprofit center has brought readings, workshops, tutoring, and literary events to Denver in a historic setting.

Who: MFA grads Michael J. Henry and Andrea Dupree began Lighthouse out of frustration with the MFA model—and (like so many other MFA grads) a lack of job prospects. Over the years, Lighthouse has been home and host to such authors as Steve Almond, George Saunders, Colson Whitehead, Lorrie Moore, Jennifer Egan, and Mary Karr.

Workshops: Workshops such as “Horror, Shockers, and the Supernatural” and “How to Write Sex Scenes Without Shame” offer a unique, positivity-based philosophy on writing. These workshops are especially great for writers who shy away from the criticism and outright negativity endemic to many MFA classrooms.

What: More than just a writing mecca, The Shocking Real-Life Writing Academy offers classes in social media and stand-up comedy, as well as writing retreats and professional editing services, since 2007.

Who: Humor writer Hollis Gillespie founded The Academy with the goal of helping writers remain relevant in the digital era. She’s now joined by a rotating staff of journalists, novelists, playwrights, and performers.

Workshops: With workshops like “Atlanta’s Most Popular Blogging Class” and “Online Novel Writing 101,” you’ll gain insights to writing for venues and platforms notoriously ignored in academic circles: social media and the Internet.

Also nearby: Students can attend writing intensives or submit their stories to the lit journals at the Atlanta Young Writer’s Workshop and The Wren’s Nest.

What: Though not listed as a nonprofit, this school boasts a collaborative (rather than competitive) environment that provides Chicago-based writers with an affordable and accessible alternative to the MFA.

Who: Poet, filmmaker, and Ph.D. candidate Francesco Levato founded the Chicago School of Poetics in 2011. He teaches courses along with a staff of eight poets/instructors and visiting authors that range from Eileen Myles to CA Conrad.

Workshops: No-pressure workshops like “Poetry and Feminist Theory,” “Pulse Poem Pulse,” and “Red-Headed Stepchild: The Unholy Spawn of Poetry and Story” have given the school its reputation as a genuinely innovative source for writers who lack the time (or cash) to pursue an MFA.

Also nearby: For business-oriented creative writers, StoryStudio offers courses in professional writing and communications strategies, in addition to their creative-writing workshops.

What: Founded in 1997, Grub Street offers more than 600 classes and events per year for writers of all backgrounds and genres.

Who: Executive director and former literary agent Eve Bridburg envisioned Grub Street as a literary haven beyond the walls of academia. With a support and instructional staff in the hundreds, it’s no wonder Grub Street is one of the nation’s leading creative-writing centers.

Workshops: While MFA workshops often employ the short-story model, Grub Street’s yearlong “incubator” courses in novel and memoir writing are especially helpful for writers working on longer projects. As a bonus, writers can sign up for one-on-one manuscript consultations with members of Grub Street’s talented staff.

What: One of the oldest nonprofit writing centers in the nation, The Writer’s Center began in 1976 and provides writing workshops, hosts more than 50 literary events yearly, and promotes the local arts scene.

Who: Poet Stewart Moss serves as executive director, and the center’s team of more than 50 workshop instructors includes novelists Kathryn Johnson and Ann McLaughlin, among others.

Workshops: Highly affordable six-week, four-week, and daylong workshops like “How to Break Into Travel Writing with a Story that Sells,” and “Imagination in the Americas” attract writers of all ages and backgrounds. You’ll find a much more diverse crowd here than in a traditional MFA setting.

Also nearby: Located in Baltimore, The Creative Alliance hosts visual artists, writers, performers, and filmmakers who hold workshops for artists from every discipline.

What: The largest independent literary organization in the United States, the Loft was founded in 1974 and now reaches more than 13,000 people every year through its workshops, readings, and discussions.

Workshops: Inclusion, boldness, and abundance — qualities often shunned in traditional MFA dictums — are paramount to The Loft’s classes, which include “History-Scented Fiction: Using the Past Lightly” and “Brain Science for Writers.”

The Center for Fiction

What: In 1820 — before the public library system — The Center for Fiction began building its collection of 800,000 circulating titles. Since then, it has continued to thrive as one of the nation’s leading bookstores and cultural centers.

Who: Noreen Tomassi, international author and playwright, serves as executive director, with such notable authors as Ann Packer, Gabriel Roth, and Terese Svoboda at the workshopping helm.

Workshops: The only U.S. nonprofit devoted solely to the craft of fiction, The Center for Fiction offers workshops in genres verboten in many MFA programs, including “Crafting the Perfect Crime Novel” and “Advanced Crime Fiction Writing.”

Also nearby: For a salon-like environment run by an Iowa MFA alum, visit The Sackett Street Writer’s Workshop in Brooklyn. In addition, Writopia Lab (locations in Manhattan and Brooklyn) provides a safe space for kids age 6-18 to explore topics and genres in writing not available at most public schools.

What: After humble beginnings in — you guessed it — an attic, this writers’ haven expanded to include studio spaces, writing courses, and open mic nights for Portland creatives.

Who: Poet David Biespiel founded the Attic Institute in 1999 and has since brought on a hefty team of writing fellows, including Lee Montgomery and Cheryl Strayed.

Workshops: From “Whitney Otto’s Mixed Genre Workshop” to “Natalie Serber’s Personal Essay Workshop,” the Attic Institute’s courses are famous for their quality and their power to motivate independent writers.

Also nearby: In addition to their generative workshops, Write Around Portland offers free, 10-week courses in underserved communities such as prisons, senior centers, and homeless youth shelters.

What: You’ll find every manner of workshop, literary event, and informal rendezvous at The Muse, including the 1st Friday Writers’ Coffee Break. With more than 2,000 registered students, this nonprofit has become one of the fastest growing writing centers in the nation.

Who: Co-founded by Lisa Hartz and executive director Michael Khandelwal, The Muse now has more than 40 writers/educators on staff to support their 60-classes-per-semester schedule.

Workshops: You won’t find workshops on self-publishing at most MFA programs, but The Muse’s expansive workshop offerings, such as “Advanced Zentangle Workshop” and “How to: Get an Agent,” will fill in any educational gaps — even if you’ve already received your MFA.

Also nearby: All about community, WriterHouse in Charlottesville furnishes writers with the space, edification, and feedback necessary to grow their personal writing projects.

What: Traditional workshops? Experimental classes on monsters? A lively reading series? You’ll find all of the above at the 17-year-old Richard Hugo House, whose mission is to “startle us into a sense of urgency – to make sure we are fully awake while we’re alive.”

Workshops: Ranging from six-week courses to daylong seminars, workshops like “Reading Graphic Masters,” “Cut to the Quick: Flash NONfiction,” and “Writing Taboo” encourage writers to explore pressing human concerns. This dynamic and diverse focus is unlike many academic programs, which plant their roots firmly in “tradition.”

This list is by no means exhaustive — very likely, a nonprofit writing center not listed here lurks in an independent library or lofty attic space near you. Seek it out and get your literary mojo flowing!