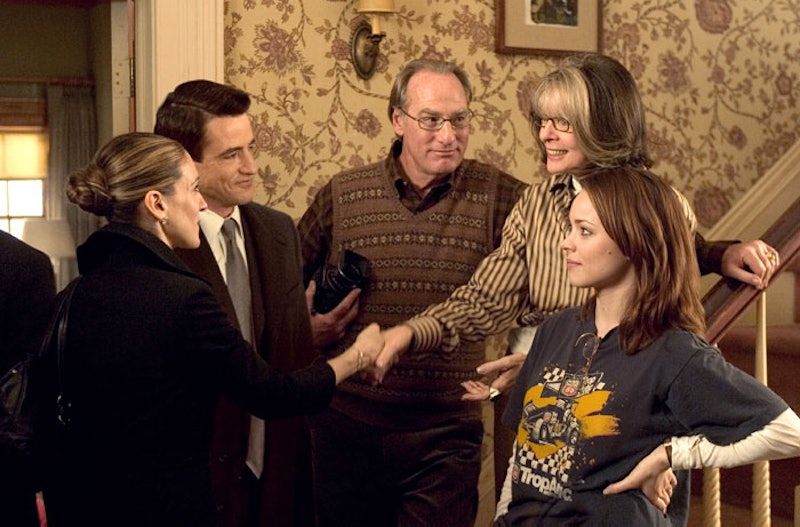 With the hours counting down until Thanksgiving Day, it’s time to start making those Turkey Day plans, if you haven’t already. Like, what will you be cooking? Is this the year you finally try Tofurky? And, most importantly, should you and your new squeeze spend Thanksgiving Day together? We vote yes — that is, if you meet the criteria below. (As for the Tofurky, give it a try too; it’s good!)

The holidays are for being with the ones you love; and nothing says you're totally into someone like spending the holidays with them. You're allowing each other to peer into the interesting, yet sometimes awkward and weird world that is your family, and that's a big step in any relationship. But it's also a necessary step. Spending Thanksgiving together helps solidify the fact that you're in a serious relationship and you want everyone in your family to know and love your significant other just as much as you do — or, at least half as much as you do. And don't you want your partner's family to be totally crazy about you, too?

Whether you decide to spend the whole day with one of your families, or divvy up the day so no family feels left out, this just might be the year that you and your partner need to spend Thanksgiving together. Here are the 21 signs that it just wouldn't be right without them.

It's not as though you'd spend one of the best holidays of the year with just anyone.

...as evidenced by the fact that YOU ALREADY KNOW EACH OTHER'S NETFLIX PASSWORD

Next thing you know, you'll be handing over you ATM card password, too.

...and CAN LIST THE foods YOU'RE BOTH ALLERGIC to

...and already HAVE A DISTINCT SIGNAL YOU GIVE EACH OTHER WHEN things get awkward

It's like a cross between a cough and choking sort of sound. When one of you hears it, it's time to bail.

YOU’RE EXCITED TO SHOW OFF YOUR THANKSGIVING CULINARY SKILLS

Now that's really something, since you wait all year for it.

AND ADMIT TO your date THAT YOU ACTUALLY DO LIKE PARADES

Well, only the Macy's Thanksgiving Day Parade, of course.

That was no easy feat, but at least it's out of the way.

...and if they haven't, you're finally ready for it

Whether they are remains to be seen.

you've BEEN DEBRIEFED ON most of each other's FAMILY HORROR STORIES

By now, you've learned that all families are a hot mess in their own ways.

and YOU WANT TO meet THEIR nutty FAMILY, TOO

You know, because maybe this actually make or break it for you guys. (I kid!)

YOU'RE READY TO GIVE UP YOUR CHILDHOOD BED FOR THE COUCH

Because you know mom and dad won't be letting you share a bed, because they still think you're a kid.

and TO BE EMBARRASSED BY TALES From YOUR YOUTH

Why it is that dad needs to bring up that time you pooped your pants in the playground is beyond you. Especially since it was just three years ago.

I mean, you were pretty cute.

and you're ready to SUBJECT THEM TO YOUR uncle's inappropriate comments

He's family, so you deal with it. That's one of the problems with families.

YOU strongly suspect THAT THEIR PRESENCE WILL EASE the FAMILY DRAMA

Because their presence makes everything better.

...and if you don't, you're willing to deal with the consequences

Your family had better love your new boo.

most of all, if you don't go together, you know you'll just spend ALL OF THANKSGIVING MISSING THEM

And texting them a play-by-play of the events, so you wouldn't feel alone.

Much like the stuffing, it's corny — but it's true. They are also your family.