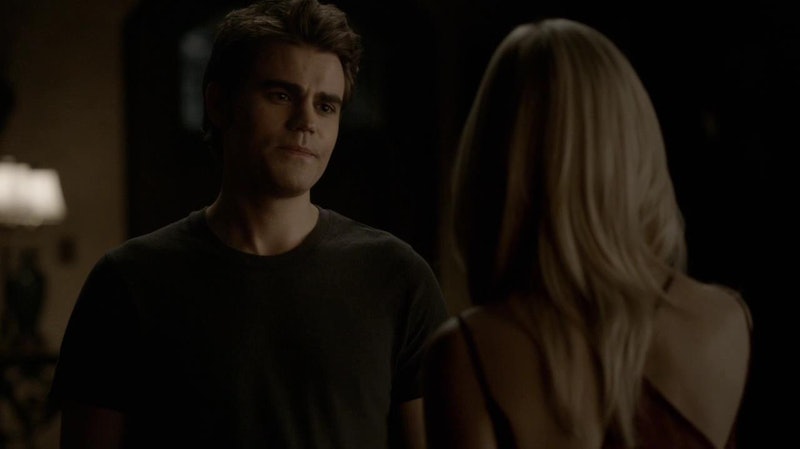 I need Stefan and Caroline to happen on The Vampire Diaries. I say need because I don't think I can cope with the sexual tension any longer, and it's truly unfair that I (or anyone else for that matter) even has to try. I'm honestly surprised that Caroline and Stefan can stand all the UST themselves. Sure, they are probably two of the most level-headed vampires on the show, but do they not see that every conversation is like foreplay to the overeager Steroline shippers of the world? Well, it is. And we're waiting, ever so impatiently. And I think the problem here is in one Stefan Salvatore: Will Stefan ever admit that he likes Caroline as more than a friend?

According to Julie Plec's interview with E!, the answer is "not in Season 6," to which my response is, "are you freakin' kidding me, Plec?!" Sure, I love the slow burn of romance as much as the next gal (I waited forever for Delena to happen, and look at how well that turned out!) but it sucks that we might not know what's in Stefan's head in regards to Caroline simply because of how the season is unfolding. I mean, right now, Caroline doesn't even want to be friends with Stefan — and it's all his fault. Stefan bailed on Caroline in order to "search for his brother," and ended up starting a new life in Georgia instead. I don't blame Caroline for being pissed, but I do blame the writers for pushing Stefan and Caroline apart just when things were getting really good. Caroline already admitted that she may have had feelings for Stefan, but he never got to share his side of that emotional coin.

Of course, that doesn't mean that this writer can't use a little Psychology 101 to discover if Stefan has feelings for the blonde vamp. Here's why I think that Stefan does have more-than-friends feelings for Caroline — even if he never, ever admits it.

He Was Afraid of Disappointing Her

Stefan bailed on everyone, but it was Caroline that he specifically avoided — and I don't think it was because he didn't care. Stefan and Caroline have seen one another at their lowest points, but Stefan was still afraid to tell her that he had given up on Damon. Could that be because, deep down, it would kill him to know she thought less of him?

He Knows Her Heart

Back in Season 5, Stefan sent Caroline to kill his doppelganger, Tom — knowing full well that she was too good of a person to do it. Not only did he trust her enough to do the right thing, but he told her that the fact that she wouldn't hurt someone made her special. (Oh, and did I mention that the episode concluded with the two of them sleeping next to one another in a tent? #Dead.)

Lexi, who is perpetually awesome, approved of the potential relationship between Caroline and Lexi's own BFF, Stefan. And if there's anyone who can see the flicker of feelings, it's a best friend.

So sorry Stelena shippers, but have you re-watched any Stelena scenes lately? Because they're a little snoozy. Caroline and Stefan on the other hand? Pure lightning magic. But hey, maybe that's just my Steroline-loving bias. Sorry not sorry. I just hope Stefan sees it soon.

More like this
You’ll Most Definitely Recognise Kyle Pryor’s Soap Star Girlfriend
By Sophie McEvoy
In Pop Culture, Female Journalists Are Finally The Main Character
By Jenny Singer
The 'Let The Right One In' Creator Says The Show “Requires” Several More Seasons
By Brad Witter
‘The Mosquito Coast’ Book Ending Includes A Major Character’s Death
By Brad Witter
Get Even More From Bustle — Sign Up For The Newsletter