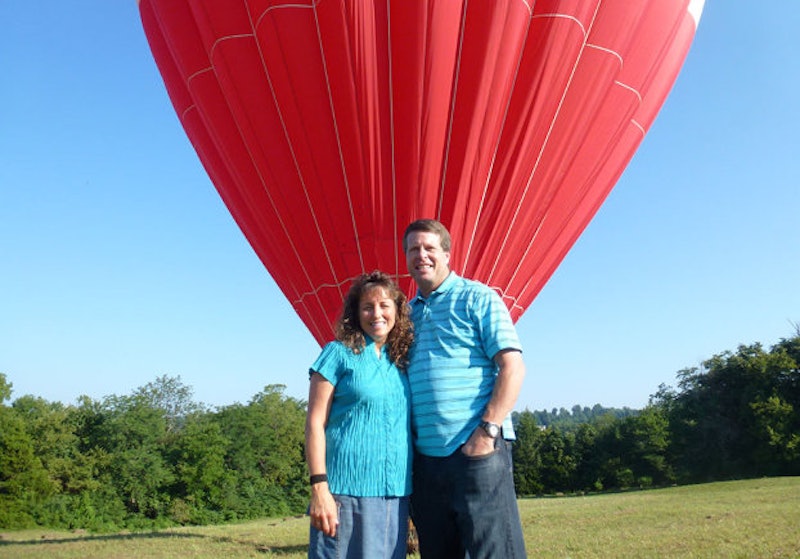 Now that 19 Kids and Counting's oldest daughters Jessa and Jill have gotten married and moved out of the Duggar family home to live with their new husbands, a couple of vacancies seem to have opened up in that giant house of theirs. Michelle and Jim Bob now only have a measly 16 children under their roof, so are they planning on adding a few more before they start suffering from empty nest syndrome? At 47, Michelle recently learned that her childbearing days may very well be over, but as it turns out, the Duggars aren't opposed to the idea of adoption.

In fact, back in 2013, they talked to People about the possibility of adopting their 20th child, and it seems like they're pretty interested in the idea — as long as the big guy upstairs approves, of course.

We are praying about it, and we'll see what God has in store. Love for children has been placed in our hearts...We are open to whatever is in store. It doesn't really matter whether I would have another child or we would adopt, but we want to approach it with an open heart. We have friends who have adopted children who are a great influence in our lives, and we have talked about their experiences. So it's something we've considered. We have to know for sure that is what God wants for us to do. When he gives us a child, there is no doubt in our minds that is what he wants, but when it comes to adoption, we would have to know for sure that was his will.

And as for the kids? They're on board, too, especially since they visited a Chinese orphanage last year and have seen for themselves that there are a lot of children in the world who have less than they do.

The kids are definitely pushing towards wanting us to open our home up to another child or more. They see how much we have been blessed with and how little so many children have and they want to share...Our children love children and we all do.

Say what you want about the Duggars, their lifestyle, and their often questionable beliefs, but they do a great job raising kids who have good hearts. They seem to understand the importance of helping others, and I don't doubt that if the Duggars adopted a child, he or she would be treated as part of the family before they even hit Arkansas soil.

Being that the Duggars have made statements like these publicly — and knowing how attached the family seems to get to the kids they meet while on mission trips — I wouldn't be too surprised if, eventually, they ended up adopting a child who needed a home. And since they certainly have the means to give that child a good life, it would be an awesome thing to do.