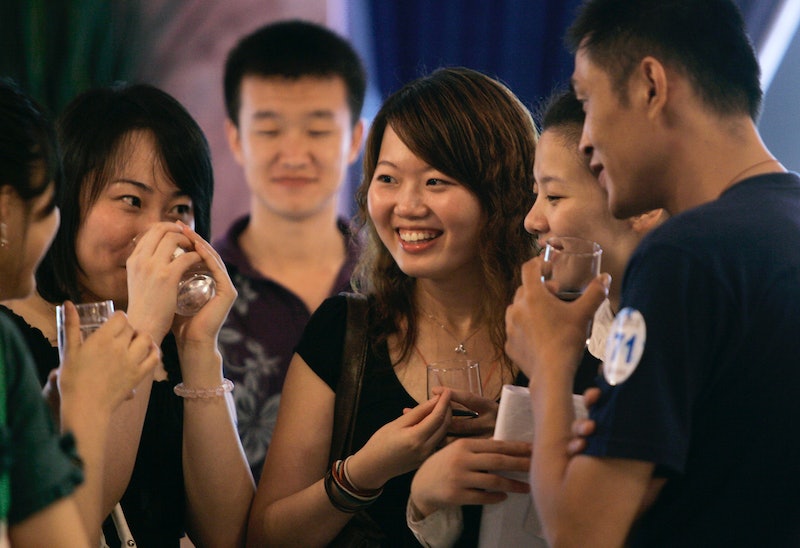 November 11 means Veteran's Day in America, but in China, 11/11 stands for something else. China's "Singles Day" is the anti-Valentine's Day Americans wish we had, when the romantically unencumbered come together for parties, karaoke, and shopping.

The holiday began during the early '90s when various university students in Nanjing began holding Singles Day celebrations. The tradition took off in society, especially among the younger crowd, and eventually became the giant retail holiday it is today, with retailers offering big promotions and launching big marketing campaigns around the event. People shop to combat loneliness (or just to get deals), while the huge increase in sales on Singles Day boosts the economy. Online retailers see notable increases in sales on 11/11, and by Tuesday afternoon, sales on the Alibaba Group's Tmall e-commerce site had already exceeded those from Singles Day in 2013. It might even be the world's largest online shopping frenzy.

But online retail isn't the only place that sees increased business on Singles Day — some Chinese women rent fake sweethearts on the holiday.

The idea is use a fake boyfriend to foil awkward parent inquiries on Singles Day (and other holidays) and escape being labeled a "leftover woman." Fake boyfriends can often be found offering services on the website Taobao. After meeting online, prospective fake couples usually meet in person for a "rehearsal" to get the love stories straight.

This might be the closest real life gets to a standard rom-com scenario. And no matter how much we complain about the faux-romanticism of Valentine's Day, at least we're not pressured to bring home randoms just to have someone.

And lest you think that Singles Day is the only made up holiday out there, here are three other holidays that prove you wrong. Let's not forget:

The retail giants: The insanity of Black Friday, the day after Thanksgiving, is legend. But in more recent years, Cyber Monday has been trying to come out on top.

That other 11/11 holiday: South Korea celebrates Pepero Day, where friends and lovers can exchange chocolate-covered candy sticks that look like 11/11.

Another anti-Valentine's Day: Black Day on April 14 in South Korea is when singles come together to wear black and eat jjajang myeon (noodles with black sauce). It's the singles' retaliation to the double romantic celebrations, Valentine's Day on February 14 and White Day on March 14.