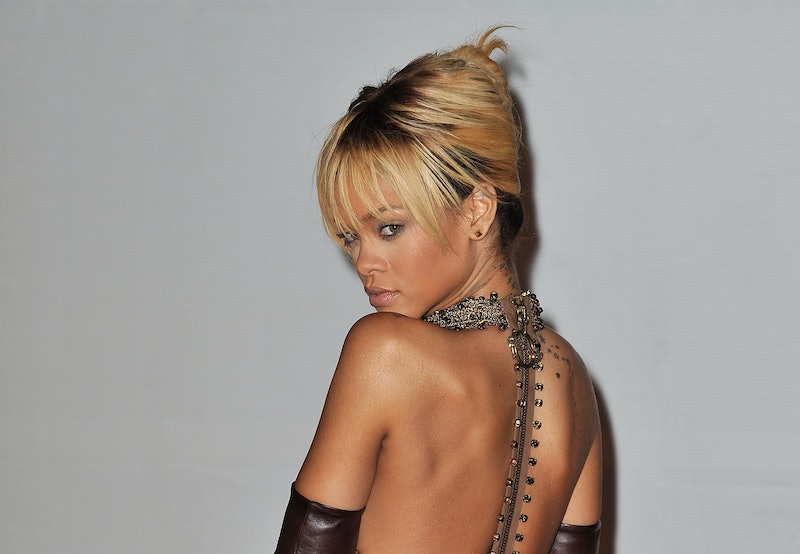 We may be getting close now, people! On Saturday, singer-songwriter Ne-Yo stopped by UK radio station Capital XTRA to dish a little bit about Rihanna's upcoming eighth studio album (which fans have affectionately dubbed "R8" until the real title is known). The good news? According to Ne-Yo, Rihanna's new album is "absolutely incredible." The even better news? It's so good, it might even be able to turn naysayers into Rihanna fans overnight:

The stuff I've heard is absolutely incredible. I can't speak on what it sounds like because I'll get in trouble. But I definitely feel like people are gonna enjoy it. Anybody that's a Rihanna fan is gonna stay a Rihanna fan, and anybody that's not might become a Rihanna fan ... just gear up for it.

Recently, Elle magazine revealed that "sources close" to Rihanna had said that "we should 'not be surprised'" if she releases a new single later this month. That little tidbit of information is especially intriguing when you consider that music producer Glass John and Rihanna herself engaged in a little "Rihvember" hype on Twitter about two weeks ago. Could the rumors possibly be true? Could new music from Rihanna be arriving any day now?

Here's everything you need to know about Rihanna's new album:

MTV reported in August 2013 that Dutch DJ Nicky Romero was working with David Guetta on a follow-up to "Right Now" — a song that the pair produced on Rihanna's last studio album, Unapologetic. Romero said that the production on their new track would be "out of the box." Sounds good to me!

The-Dream Hit the Studio with Rihanna in Paris

In February, The-Dream, who co-wrote and co-produced Rihanna's smash hit "Umbrella," posted on Instagram that he was sitting in a studio in Paris, eating Frosted Flakes and waiting for Rih to show up. "Umbrella 2.0," please.

Drake & Rihanna Spent Some Studio Time Together in London

In March, Drake and Rihanna were spotted having dinner together in London. Afterwards, they reportedly headed to the studio. I'm here for it.

Sia Furler Gave Up a "Super Awesome" Song for The Album

Sia told VH1 in an interview in May that she had just given away a song to Rihanna's manager that she had intended to keep for herself. After the deal went down, Sia said that she felt "sick." Whoa. Must be a great track!

Stargate Is Onboard & Their Material Is "Incredible"

Production duo Stargate (made up of Tor Erik Hermansen and Mikkel Storleer Eriksen) told Vibe in May that they'd written some "incredible material" for R8 and "can't wait" for everyone to hear it. The gentleman of Stargate have produced some major hits for Rihanna in the past ("Don't Stop the Music," "Only Girl (In the World)," and "Diamonds," for instance), so this is definitely good news, if you ask me.

DJ Mustard Did a Couple of Tracks for the LP

In-demand producer DJ Mustard, who's known for crafting club-ready tracks like Jeremih's "Don't Tell 'Em," said in May that the two songs he did for Rihanna's new album would showcase a "different" side of his musical talents. Interesting!

Rapper Kanye West and Rihanna were seen arriving at the same studio in West Hollywood in June. Could they have possibly created something that's just as epic as "All of the Lights"?

Newcomer Kiesza ("Hideaway") told Digital Spy in July that Rihanna had recorded "two or three" of her songs — including one that Kiesza never thought she'd pick in "a million years." You can't put Rihanna in a box.

Ester Dean Could Be Writing Hits for Rihanna Once Again

Pitch Perfect star Ester Dean, who has co-written three number-one hits for Rihanna ("Rude Boy," "What's My Name," and "S&M"), posted a studio pic with the singer to Instagram in September. Hmm, what could those two have possibly been up to?