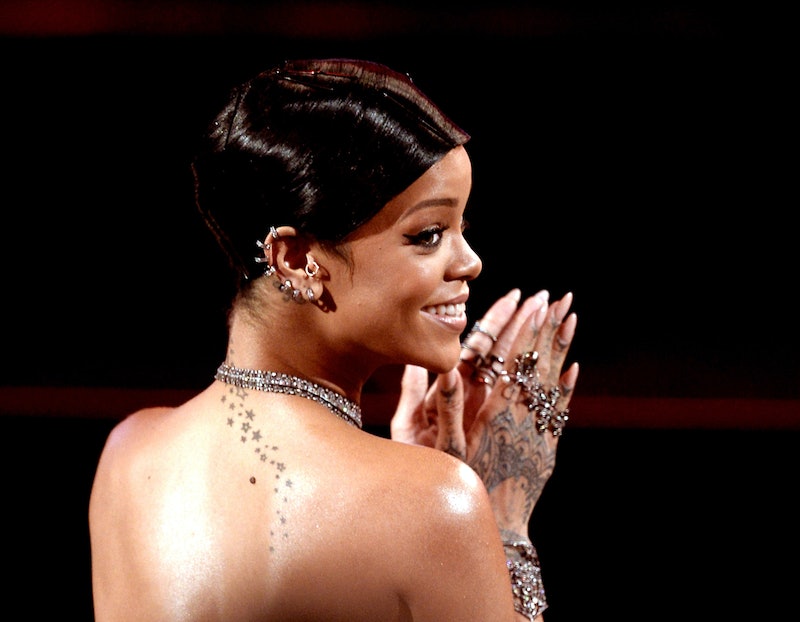 I am beyond tired of waiting for Rihanna's new album. There, I said it. Now, before you get all worked up and scream something at me, like, "My favorite artist is SO AND SO and they haven't released an album in over a BILLION years, so you don't even know how it feels!" please understand that I fully recognize that I'm being unfair here. Unreasonable, even. Rihanna's an incredibly talented and hard-working woman who has put out a whopping seven studio albums in the last nine years — she deserves a break! She deserves to take her time while recording her upcoming eighth LP (which fans have affectionately dubbed "R8" until a real title is revealed). I'm just really impatient. But what if I told you that we might not have to wait much longer to hear new music from the 26-year-old superstar? What if I told you that Rihanna's new album might be released in November?

Do I have your attention?

On Monday, music producer Glass John (Chris Brown & Brandy's "Do Better"), who claims to be working on R8, started hyping up some new music on Twitter. Soon after, his tweets were favorited by, you guessed it, Rihanna herself:

In an instant, the Navy (Rihanna's fans) were all over John's timeline, begging him for more information. In the process, John retweeted a couple of tweets that seem to hint at a November release date for R8:

Oh, and he did some more teasing, too:

And then he assured people that he wasn't "trolling":

Rumors that Rihanna might be releasing her new album on Nov. 24 began to pop up online last week (along with a suspicious-looking "press release" from her record label). So far, John and Rih's Twitter activity is the only real "evidence" we have that this thing might actually be happening. I mean, when you think about it, it does kind of make sense. Rihanna's released her last four albums in November, and it's a magical month for album sales, what with Black Friday and holiday shopping. Additionally, a November release would put about two years between Rihanna's new album and her last one, 2012's Unapologetic, which is standard operating procedure for a lot of pop artists. Could R8 finally be on the horizon?

In September, Ne-Yo told UK radio station Capital FM that he had worked with Rihanna on some new material, but he didn't elaborate any further. That's really the last thing we've heard about the album. If these RIHvember rumors turn out to be true, I will be elated. I will sing, I will dance! But if they turn out to be false...I don't even know what I'll do. All I can say is that I hope Rihanna shares some new information about her upcoming project with fans soon, because believe me, at this point, we're all PARCHED and THIRSTY for details.