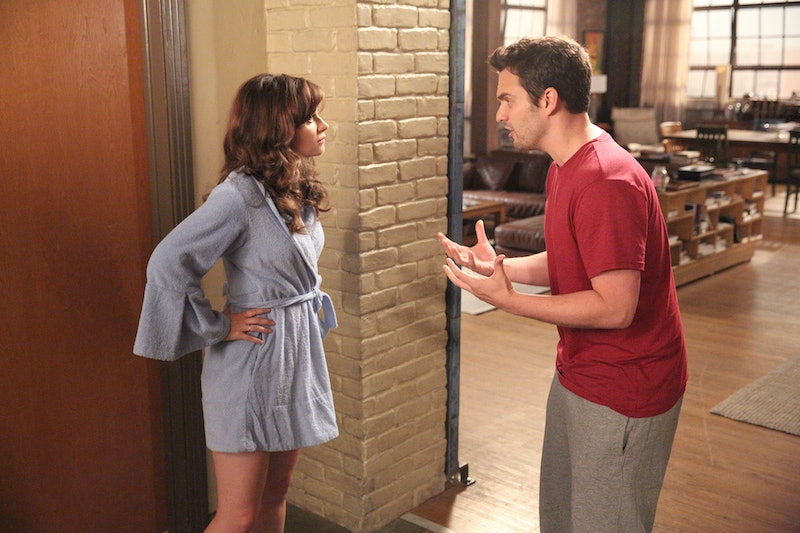 This show is really toying with my emotions these days. Last week the series surprised me with an adorable Schmidt and Cece kiss and now after Tuesday night’s New Girl episode “Goldmine” I find myself rooting once again for a Nick and Jess reunion. I mean, these two characters are just so good together, ya know? So much so that even when they’re seeing (and sleeping) with other people, I can’t help but focus on their dynamic. I know this. You know this. The writers know this, which is probably why they’ve been reluctant to give Nick and Jess too much screen time together this season post-break up. Their natural chemistry together would give fans false hope. Which I’m afraid is exactly what’s happened to me.

“Goldmine” centered around how Jess attempts to deal with the uncomfortable task of informing her latest beau, Ian, that she still lives with her ex. (Awkward.) So, naturally, Nick comes up with a logical solution: tell her boyfriend Nick is now gay. Not exactly the makings of the most solid plan ever, but alas Jess decides to go along with it anyway when the truth proves to have less than fruitful results.

But apart from it being downright hilarious to watch Jake Johnson play a gay version of Nick Miller (or "Gay Nick" as he likes to be called), the plan inevitably backfires when Nick has his own lady friend over that very same evening and Ian realizes Jess was lying to him. Let's just say, it was one of the most stressful morning afters I've ever been apart of.

However, before Ian heads for the door, he does make one very valid point in reference to Nick: "Clearly, he would do anything for you." Well said, my friend. Well said. It was very selfless of Nick to do this for Jess. He even kissed Schmidt to make the plan more convincing. If that's not true love I don't know what is. Plus, perhaps the whole point of throwing Nick and Jess into relationships that never stick are the writers' weird way of hinting that neither of them are ready to move on from each other. Not now. Not ever. Call me naïve, but I haven't given up on these two… even if they are currently sleeping with other people. Yay optimism!