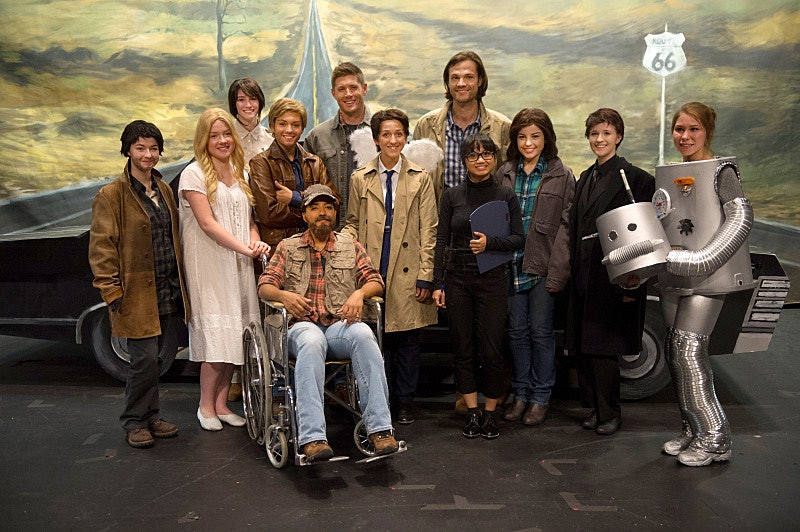 Whoever thought an acoustic, group performance of "Carry On My Wayward Son" could be so damn emotional? The 200th episode of Supernatural, "Fan Fiction," provided fans with the a great balance of laughs and heart, despite not necessarily having the best supernatural case from the last 10 years. But who really cares when we were given some of the most meta moments of all time? As we all know, there are certain things you should never bring up to a Supernatural fan lest you want to slapped upside the head or start an all out debate. Like for example, the lack of female characters on the series. But that concern and many others, as well as old characters and quotes, were brought back in "Fan Fiction" in pretty much the best ways possible, including the return of Chuck Shurley and a message to fans who would love to see Dean and Castiel in a relationship. I know there are tons of you Destiel fans out there.

Along with a fun nod to Destiel, the series' writers also brought in a great dose of other meta moments that really captured a lot of the same perfection of Season 6's "The French Mistake," which showed Dean and Sam transported to another reality where they were actors on the set of a TV show called Supernatural. All of the same funny moments of confusion for Dean and Sam were present in "Fan Fiction," along with great musical theatre references Dean did not understand or enjoy, though he did eventually start to enjoy the songs from the Supernatural musical.

So what did "Fan Fiction" address that fans should appreciate? For starters, there's the fact that the episode is actually called "Fan Fiction." Then there's the aforementioned Destiel which was brought up when Dean noticed that the girl playing Dean and the girl playing Castiel were hugging each other. Dean asked the writer/director of the show what the hell they were doing and she explained the "subtext" between Dean and Cas from the Supernatural book series. Dean also finds out that the two girls playing Dean and Cas in the show are a couple in real life. Oh how the subtext grows.

Of course, Sam is both entertained and seems a bit hurt by the idea of Destiel (what about his relationship with Cas?) that he comes up with alternative names for the fictional couple including "CasDean." He also comes up with a name for himself and Cas called "Sastiel." Now that one is definitely catchy.

The writers also brought up the "Wincest" fans who yearn for a relationship between Dean and Sam. Yes, the brothers. Yes, it's strange. Dean finds out again from writer/director Marie that the Supernatural musical has a "BM" scene which does not stand for bowl movement, but instead means boy melodrama, where the brothers talk about their relationship and other emotions. The two girls playing the brothers are standing a bit too close for Dean's comfort and Marie brings up the wincest subtext, which completely skeeves Dean out.

Plus, let's not forget about the fact that the Supernatural musical was written and directed by a woman and performed by an all-girls school. Certainly shows the writers have heard all of the "lack of females in the series" complaints many times.

"Fan Fiction" also brought back some of our favorite lines from the series including the female Castiel saying "Ass Butt," female Bobby trying to perfectly capture the word "Idjit" and this exchange between real Dean and fake Dean (also played by the Supernatural musical writer/director Marie), which also featured a nod to Dean's old amulet from previous seasons.

Maybe not the most appropriate thing to say to a kid, but fans (including myself) were satisfied. There were other nostalgic and satisfying moments from the episode, including rehashes of old supernatural creatures and even a nod to whatever happened to Adam. Apparently he's still in Hell and the brothers Winchester have even forgotten about him. Poor guy.

Overall, the episode was pretty much the icing on top of the cake that has been the last 10 years for Supernatural fans. We've loved every minute of it, even the most mediocre of minutes, and it's impossible to think of another show on television right now that loves their fans as much as the cast and crew of this hit CW show do.

The feeling is mutual.