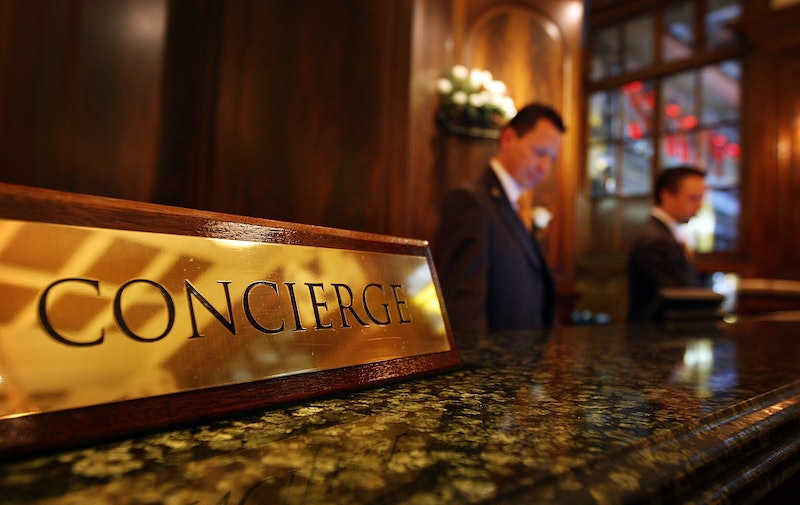 Working in a service industry of any type is bad enough, but I’m going to go out on a limb here and say that nothing is as bad as what you see when you work in a hotel. Need proof? The How May We Hate You? Tumblr has more evidence about the awfulness of human beings than you could ever want or need. It’s hilarious, of course — but good gravy. If this doesn’t make you sympathetic to the plight of a hotel concierge (or any other hotel worker, for that matter), then nothing will.

How May We Hate You? isn’t exactly new — it first launched in October of 2013 — but since I somehow I managed to avoid its wondrous existence for an entire year, I’ve only just now discovered it. The brainchild of comedians Anna Drezen and Todd Dakotah, How May We Hate You? chronicles the trials and tribulations of working at a hotel in New York’s beloved/reviled Times Square. According to their “About” page, they both fell into concierge work as a way to pay the bills; then, because everyone has to find a way to stay sane when exposed to the number of demanding divas you do working at a hotel, they soon began posting their funniest and weirdest experiences on the job on their Facebook pages. Their friends convinced them to start a Tumblr devoted to the subject, and the rest… well, you know how it goes.

Given that I always end up wasting hours on AskReddit threads focusing on hospitality industry nightmares, it’s not at all surprising How May We Hate You? sucked me into its horrifyingly hilarious depths within about 10 seconds. The stories seem to come in approximately four levels of insanity, and as HuffPo puts it, they show the “dark side of the service industry and… should make you want to buy your concierge a drink." Here are a few of my favorites, arranged in ascending order of WTF:

Does being in the presence of a concierge magically cause some people to lose their filters completely?

I would have gone with the Boston Tea Party reference, but that’s just me.

We are all aware that hotel concierges aren’t Mary Poppins, right?

(Looks suspiciously at everyone.)

What? You haven't built a time machine yet?

Just for the record, the MTA discontinued tokens in favor the MetroCard in 2003.

I assume this person either wanted a restaurant that only serves brunch… or that he does not, in fact, know what brunch actually is.

I would have run out of nice long before then.

And in case that wasn’t enough for you:

I… have no words.

For more horror stories, head on over to How May We Hate You? — but be prepared. It might cause you to lose all faith in humanity. A word of advice? Don't be these people.