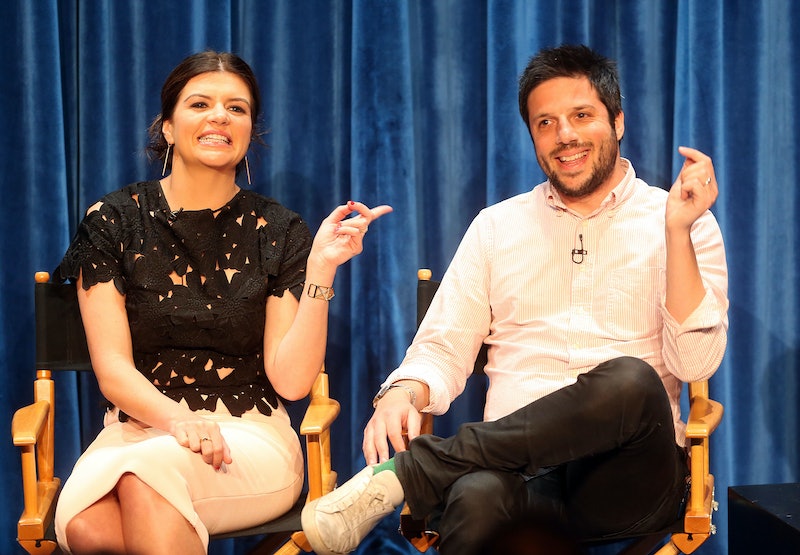 Exciting news for Casey Wilson fans, funny people fans, Happy Endings fans, and fans of babies in general. Well, I think you can see what I'm getting at here. According to a report from Us Weekly, Casey Wilson is pregnant with her first chid with husband David Caspe. Woohoo! Break out the non-alcoholic champagne and watch that Lawrence Welk sketch from SNL on repeat, it's time to celebrate!

Only, not so fast. The news hasn't yet been confirmed by Wilson or Caspe, so take it with a grain of salt. We don't know for sure who these anonymous sources are anyway. It could be Wilson herself or it could be some random person who was like, "No one will suspect anything because it's not like I'm claiming Beyoncé is pregnant."

That said, we do know that Wilson and Caspe are, in fact, actually together. The couple got married in May in Ojai, Calif, after meeting on Happy Endings in 2011. Wilson starred on the ABC show which ran for three seasons, and Caspe was the show's creator and one of the executive producers. Currently, the couple is working together again on NBC's Marry Me which, like Happy Endings, stars Wilson and was created by Caspe. Well, the couple that works together, has babies together. Isn't that how the saying goes?

For now, I leave you with the amazingness that is Casey Wilson's wedding congratulations to herself:

If these aren't two people who should be procreating, I don't know who is.

More like this
Kelly Osbourne Found Love In Her Best Friend & Now They're Expecting
By Vivian Iroanya and Rachel Mantock
Is Megan Fox Pregnant? MGK Gave A Shout-Out To Their “Unborn Child” Onstage
By Hugh McIntyre
Kaley Cuoco & Tom Pelphrey Just Made Their First Public Appearance As A Couple
By Hugh McIntyre
Natalia Dyer & Charlie Heaton's Relationship Is Still Going Strong
By Allyson Koerner and Sophie McEvoy
Get Even More From Bustle — Sign Up For The Newsletter