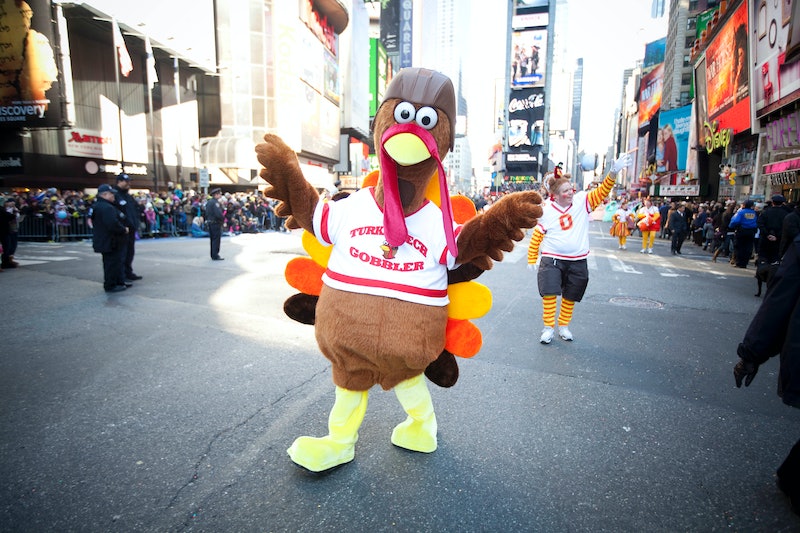 For many red-blooded (and red meat-eating) Americans, Thanksgiving is a favorite holiday: there's a mountain of delicious food, a football game, the Macy's parade, and family gathered from near and far. Your surly old grandpa is screaming at the TV, and your crazy aunt Joan is throwing another stick of butter into the mashed potatoes because cholesterol was "invented." Your baby cousins are running circles around the kitchen island, and the family dog is waiting dutifully, mouth agape, hoping to catch some scraps amid the preparation. All is right with the world. But for vegetarians and vegans, Thanksgiving can be a little more complicated.

I should know. Having become a full-fledged veggie at the age of five, I've partaken in 18 meatless Thanksgiving dinners and by this point have a pretty firm grasp on what it really means to be a vegetarian on Thanksgiving. As a little kid, I used to dread the weeks leading up to that fateful Thursday, knowing thousands of turkeys would be executed to land on dinner tables, and there was nothing I could do to stop it.

As an adult, I still dread the weeks leading up to Thanksgiving for the same reason, but now, there are other problems to worry about as well — like explaining to new members of the family why I don't want to try the stuffing (who knows what's in there!). If you're also a vegetarian, you know what I'm talking about. Here are 11 struggles only vegetarians understand about being a non-meat eater on Thanksgiving.

Dealing with people asking "What will you even eat?!"

People Attempting to Peer Pressure You Into Trying the Turkey

Their attempts will include, "Are you suuuuuure you don't want to try the turkey?" And, "But you're missing out! It's soooooo good!" — As if elongating their vowels will tempt you into transforming your carefully chosen dietary habits.

being asked "Do you even celebrate Thanksgiving?"

Yes, I've actually been asked that. While I might not be on the level of extreme nationalism and meat-eating tendencies that Ron Swanson boasts, I do love celebrating a holiday that allows me to be close with my family and, as I mentioned above... PIE.

But then again, it is a holiday based off Christopher Columbus pillaging another people's resources, so it might as well be nicknamed after a dead animal.

Because while you don't want to apologize for being a vegetarian, you also don't want to burden your new hosts. To you, being a veggie means saving the lives of more than 200 animals a year. To your boyfriend's grandmother, it's insulting not to try her infamous stuffed turkey.

the awkwardness of having to ask "Is there chicken broth in this?"

It appears to be such an offensive question, you might not even both asking and avoid certain dishes all together. My tip? Try saying: "This looks amazing! What's in it?"

having to explain why you do or don't like tofurky

Because apparently, if you don't like animal flesh, you must love soybeans moonlighting as animal flesh.

And your stance on the Turkey Pardon

Most people would be surprised to know that many vegetarians find the idea of the Turkey Pardon pretty stupid. First of all: the idea of the pardon first started as show. According to a NYT article, the first turkeys pardoned were sent to the slaughterhouse after their ceremony. Well, isn't that sweet.

I do, however, like the idea that in a small way — it reminds the American people where their turkey comes from (the slaughterhouse) and what it takes to get it on their table (death). But really, doesn't the president have better things to do?

Because it's better to be safe than sorry!

This is your meal, after all.

and twice as many desserts

But really ... you'd probably do this if you ate meat, anyhow. Am I right? Yeah, being a veggie on Thanksgiving could be worse.