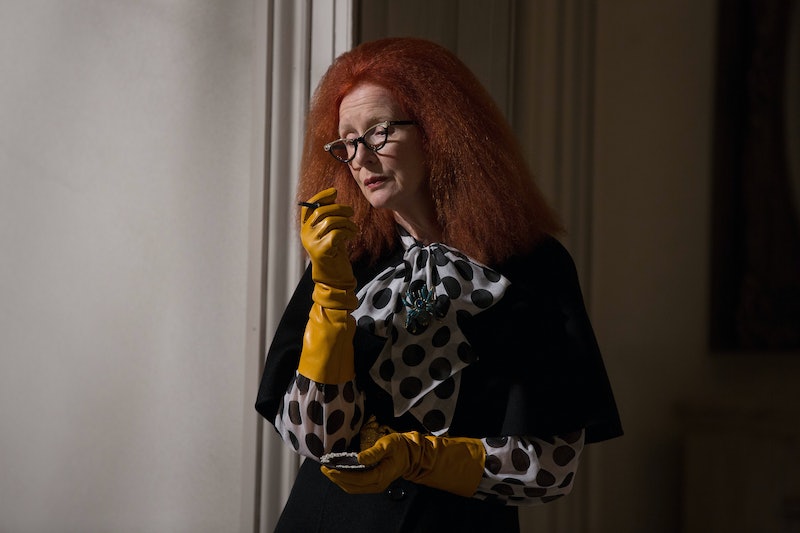 If there is one thing American Horror Story thrives on, it's producing an astounding array of complex and versatile female characters. (Well, that and scaring the bejesus out of us each and every week.) But just like with any compelling role, you need an equally compelling actor or actress to successfully pull it off. And while each member of this incredible ensemble knows how to deliver an A-list performance, no one knows how to deliver a line quite like AHS star Frances Conroy. I mean, there are ways to deliver a line, and then there's Frances Conroy's way of delivering a line. The woman is just on a whole other level of greatness and it's an absolute joy to witness.

Some actors have come and gone throughout the years on this series, but Conroy has been a constant staple of this FX anthology for all four seasons. We've seen her wipe the floors clean (so to speak) with the ghosts of Murder House and watched in wonder as she went toe-to-toe with Jessica Lange's Fiona Goode in Coven . Now she can be found mothering and smothering her psychopath of a son in the role of Freak Show 's Gloria Mott, which has already proven to consist of some of her best quotes to-date.

So in honor of Conroy's undeniable greatness, I thought it would be fun to look back on some of her best AHS quotes that prove she's the supreme of comedic timing.

This may be a horror show, but that doesn't mean we can't be civil.

On Lack of Talent:

Zing! Looks like someone is not a David Bowie fan.

This qualifies as a "burn" on so many levels. Bless you, Myrtle.

Hurtful, but honest. Ya gotta respect that.

And the best "last words" speech goes to…

Don't mess with this maid.

Think of her like the Tim Gunn of the Witches Council.

Myrtle Snow does not approve.

"I'm certain of her credentials. She's brought back more people from the dead than Jesus Christ."

Such a girl scout, this one.

On Knowing You're the Next Supreme:

"I'm told it starts as a tingle in the cooch." Well, OK then.